The Lord continues to amazingly bless the evangelistic Ark Encounter. There is less than a year until opening, and a family has stepped forward with an offer to match every gift to the Ark Encounter dollar-for-dollar through the end of the year up to $2 million!

This is a very exciting and historic time for Answers in Genesis!

On November 12, we are holding a press conference at the construction site of the life-size Noah’s Ark to make a major announcement: the opening date of this attraction being built in Williamstown, Kentucky. As God blesses, the Ark will be one of the greatest evangelistic outreaches of our day. It will be a one-day drive for almost 2/3 of Americans.

We will, of course, post a video of the exciting announcement on the AiG website and through social media.

I’m actually writing this the day after a unique opportunity I had to share an update about the Ark project and the massive economic impact it will have in the region. I spoke to about 150 civic leaders at a Chamber of Commerce breakfast in Northern Kentucky. What I shared at that breakfast became the front-page story in both of the major newspapers for our region, the Cincinnati Enquirer and the Kentucky Enquirer. 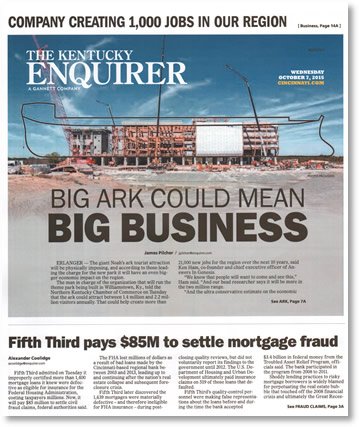 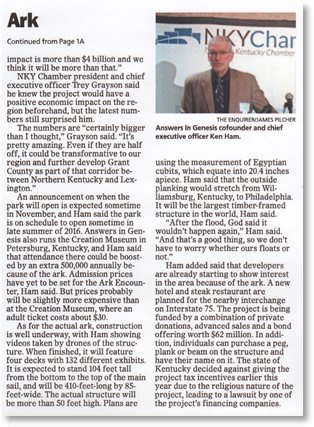 Note the headlines: “Big Ark Could Mean Big Business.” Another regional newspaper, the Cincinnati Biz Journal, had the following headline in a good article about the breakfast meeting: “Will the Ark Encounter rain $4 billion on the region’s economy?”

People are starting to realize just how big this Ark will be (in more ways than one)!

The Ark is an enormous structure. I shared with the attendees at the Chamber of Commerce meeting that I’ve taken a number of guests to the construction site who have told me, “This is going to be one of the wonders of the modern world.”

In fact, because the Ark will be the biggest timber frame building in the world, and in many ways is an architectural and engineering marvel, I believe this huge ship will be a wonder of our modern world.

For this Chamber of Commerce meeting, I concentrated on giving information about the construction of the Ark and its economic impact (forecast by independent consultants). It really opened a lot of eyes. More and more people are now realizing that there is going to be an extremely significant economic benefit to the city of Williamstown, to Northern Kentucky in general, and the entire state of Kentucky (and nearby Ohio and Indiana).

You may recall that experts hired by Kentucky state officials agreed that we met all the requirements for the Kentucky tourism incentive (a rebate of sales tax generated at the Ark up to certain amounts after the Ark opens). And as we’ve documented, the state rejected our right to the rebate because we will be giving a “religious” message at the Ark!

In fact, we make no apology about our Christian message. We have never hidden the fact that our purpose is to spread the truth of God’s Word and its life-changing gospel message.

At the Chamber of Commerce meeting, I told the civic leaders that AiG is a Christian organization and that we will be giving a Christian message through the Ark project—and we don’t hide that fact! During the question time with Chamber members, I was asked, “Once the Ark is opened and people are coming, what will actually have been achieved at the Ark?”

The answer I gave was this: AiG believes Noah’s Ark and the Flood were real events in history. And because many people today scoff at the idea that Noah could fit the animals on the Ark or feed them, and have many other Ark questions, we are going to answer them—and tell the world that the history in the Bible is true . . . and therefore the gospel (based in that history) is true!

as we tastefully (but boldly) present Christian messages at the Creation Museum, we will do so at the Ark.

I also explained that just as we tastefully (but boldly) present Christian messages at the Creation Museum, we will do so at the Ark.

So even though the major headline in our newspapers was “Big Ark Could Mean Big Business,” the headline to us really should be “Big Ark To Bring Big Message.” And it’s a message the world needs right now—one that will shine a bright light in a culture that is increasingly becoming spiritually dark.

As I was standing within the massive Ark structure recently, I was thinking about the fact that usually it’s not an evangelistic-type ministry that will stand boldly, unashamedly, and uncompromisingly on the authority of God’s Word and would operate such a world-class attraction!

Wow! God has entrusted this Ark to us for His purposes. What an honor! What a privilege! And you who pray for AiG and support us financially are a part of this outreach.

As you know, for over 20 years we have honored the Lord and His Word in all that we do, and for over 8 years we have exalted the name of the Lord Jesus Christ at the Creation Museum. And I believe that because we have faithfully done that, the Lord has now entrusted something with much greater potential to reach millions of souls with the saving message of the gospel: the life-size Ark.

And what a time it is for such a Bible-upholding facility to open. I believe we can even describe today’s culture like the one in Noah’s day:

Then the Lord saw that the wickedness of man was great in the earth, and that every intent of the thoughts of his heart was only evil continually. (Genesis 6:5)

I’m also reminded in 2 Peter 3 that in the last days (and we are in the last days—we just don’t know how “last” they are!) scoffers will reject that the Flood actually happened.

I see the Ark Encounter (which will attract millions of guests from America and around the world) and the Creation Museum as special facilities for the church to use in these challenging days to help fulfill the Great Commission.

We know that one day, Christ will return to this earth. Of course, we don’t know when that will be. Regardless of how secularized the culture becomes, and regardless of how spiritually dark the situation may seem, let’s remember the parable Jesus taught in Luke 19 and His command in verse 13 to “do business till I come.”

We should never stop doing the business of our King, Jesus Christ: the spreading of the gospel.

You know, it’s been a big step of faith for AiG to build this life-size Ark. We have (and continue to have) all sorts of battles (as we did building the Creation Museum). But we are burdened to reach as many people as we can with the truth of God’s Word and the gospel, and are undaunted.

I don’t know of many (frankly any) Christian facilities that can reach so many people with the gospel. The Creation Museum has presented over 2.5 million people with the creation/gospel message. The Ark Encounter is estimated to reach 2 million or more people a year from across the nation and around the world. And they will hear the most important message in the entire universe: the gospel.

So many of you, through your prayers and donations, have helped us get to the point where we are in the home stretch for the Ark’s funding. The Lord has blessed us with $23 million of the $29.5 million donation goal for the Ark structure.

To help us reach the goal of the remaining $6.5 million in donations needed for the Ark, a family has offered to match dollar for dollar every donation given to the Ark project between now and December 31, 2015—up to $2 million! This is the biggest matching gift opportunity we have ever received, and I believe this is the way the Lord is encouraging and challenging us at this crucial time.

Be sure to visit the AiG and Ark Encounter websites on November 12 for the BIG announcement of the opening date of the life-size Noah’s Ark. The date we announce will be in the summer of 2016. A hint: the answer is found between Genesis 6 and 9!