The Platypus Is an Evolutionary Puzzle—Have They Finally Solved It? 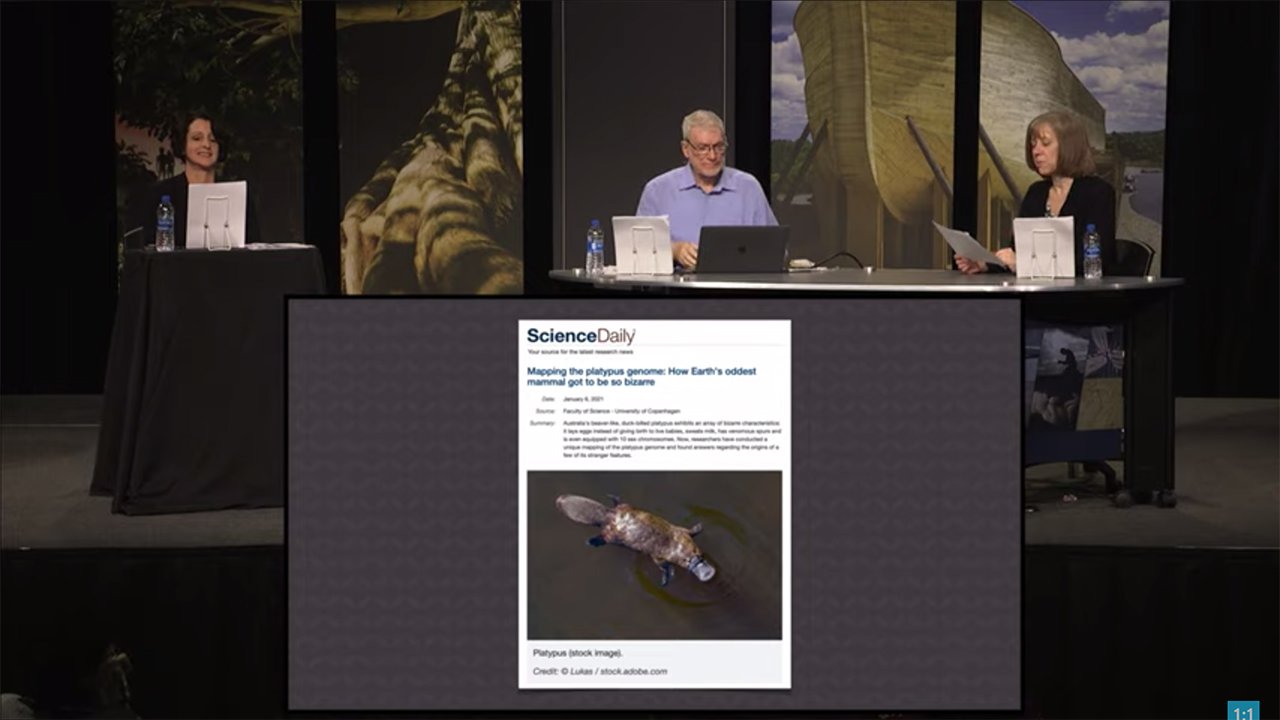 One of the more enigmatic creatures in the world lives Down Under in rivers and creeks of my native Australia—it has fur like a mammal (and the fur glows in UV light), spurs like a rooster, lays eggs like a bird, has webbed feet like a duck, a tail like a beaver, and venom like a snake. What is it? It’s the platypus of course!

This mosaic creature has always been a puzzle to evolutionists. After all, what did such a bizarre creature supposedly evolve from? Well, evolutionists now claim their understanding of the platypus’ origins has greatly advanced.

They’ve concluded that this aquatic mammal has lost and gained various genes throughout its history. But this is nothing more than storytelling.

In a study published in Nature, scientists announced they’ve mapped the platypus genome. As they peer into the observational science (DNA sequences), they’ve interpreted them (with historical science) through the lens of their worldview and their evolutionary beliefs about the past. They’ve concluded that this aquatic mammal has lost and gained various genes throughout its history. But this is nothing more than storytelling.

The platypus is very unique because it shares features with mammals, birds, and reptiles. It’s quite the puzzle for evolutionists to imagine what it might have evolved from! Now that the platypus genome has been decoded, scientists have woven together a STORY about genes lost and gained through millions of years of evolutionary history to make the platypus what it is today. It is an amazing feat that with today’s technology we can sequence the genome of nearly any organism.

However, that DNA sequence doesn’t tell us that the creature really did evolve, how that creature evolved, when it evolved, or what it evolved from. That information is imposed on the data by scientists that start with an evolutionary worldview. For example, they claim the platypus lost a couple vitellogenin genes (needed to make eggs) and gained casein genes (needed for milk). But there’s no evidence to support that! They just OBSERVE that the platypus has one vitellogenin gene (unlike the chicken, which has three of these genes) and that it has casein genes. These are the facts!

Starting with God’s Word (which contains the truth about the past, including the origin of animals), God spoke the animal kinds, including the platypus kind, into existence during creation week about 6000 years ago. He very likely designed the platypus with just one vitellogenin gene and casein genes needed for the egg and milk production of this unique animal. To quote a line from a fun Buddy Davis song, “It’s designed to do what it does do, and what it does do it does do well!”

Studying the genomes of various creatures does indeed offer great insight, but it’s not insight into their origins. If we want to understand origins, we need to first look to the true history found in God’s Word, which tells us God created everything in six days and just a few thousand years ago.

This item was discussed yesterday on Answers News with cohosts Dr. Georgia Purdom and Dr. Jennifer Rivera. Answers News is our weekly news program conducted here at the Creation Museum and broadcast on my Facebook page and the Answers in Genesis Facebook page. We also covered the following topics:

Watch the entire episode of Answers News for January 18, 2021.