Do you ever feel at a loss for words when discussing your faith with non-Christians? Do you struggle to pinpoint what’s wrong with their arguments? This new resource makes finding errors seem easy!

If you think a course in logic sounds dry, abstract, and complicated— best left to intellectuals—the new book Discerning Truth will probably change your mind.

Dr. Jason Lisle presents logic as a powerful, easy-to-use tool for anyone passionate about sharing or defending the Christian faith, especially against an evolution-based worldview. Discerning Truth also sheds light on today’s most common evolutionary arguments and shows them for what they really are—empty words with no logical basis.

Have you ever heard an evolutionary argument and thought, “That’s not even logical—but I can’t explain why”? Or have you ever read a phrase like “fallacy of reification,” maybe even on the Answers in Genesis website, and let it just whiz over your head without grasping its meaning? As foreign as the vocabulary of logic may sound now, it will become meaningful and very practical when you read Discerning Truth. 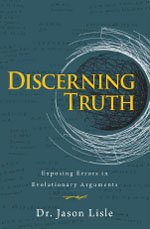 Dr. Jason Lisle presents logic as a powerful, easy-to-use tool for anyone passionate about sharing or defending the Christian faith. Order Now!

Dr. Lisle devotes the first nine chapters of his new easy-to-read book to the logical fallacies that are most commonly heard in the creation/evolution debate. In each chapter, he defines a term and then gives many actual examples to illustrate how evolutionists, and unfortunately sometimes creationists, commit the fallacy in their arguments.

For example, the first chapter opens with the definition of reification, the fallacy of attributing a concrete characteristic to something that is abstract. Dr. Lisle then gives many examples, such as, “Nature has designed some amazing creatures.” That sounds like a harmless assertion, but in reality it isn’t. Attributing the amazing design of creatures to “nature” obscures the fact that the evolutionary worldview cannot explain the origin of the design. God, an intelligent being, can design, but nature does not have a mind and cannot design anything.

Evolutionists frequently attempt to add credibility to their beliefs by use of reification with such statements as “science says,” and “natural selection guided.”

Dr. Lisle goes on to define and illustrate the fallacies of begging the question, bifurcation, faulty appeals to authority, and more in the next eight chapters. The wealth of actual examples (often in evolutionists’ own words) makes the book very easy to read, understand, and apply.

In chapters 10 and 11, Dr. Lisle gives an overview of several other logical fallacies that are less common in the evolution debate.

Then it’s time to test yourself. Chapter 12 gives examples of fallacies for you to identify, and chapter 13 gives the answers. Then the test gets tougher in chapter 14, with real-world examples taken directly from evolutionists’ literature. All of this practice gets you ready for the real point—offering a reasoned defense of God’s Word to those who attack the Christian faith.

This book is excellent for personal enrichment, and would make a superb basis for a Sunday school elective or Bible study group.