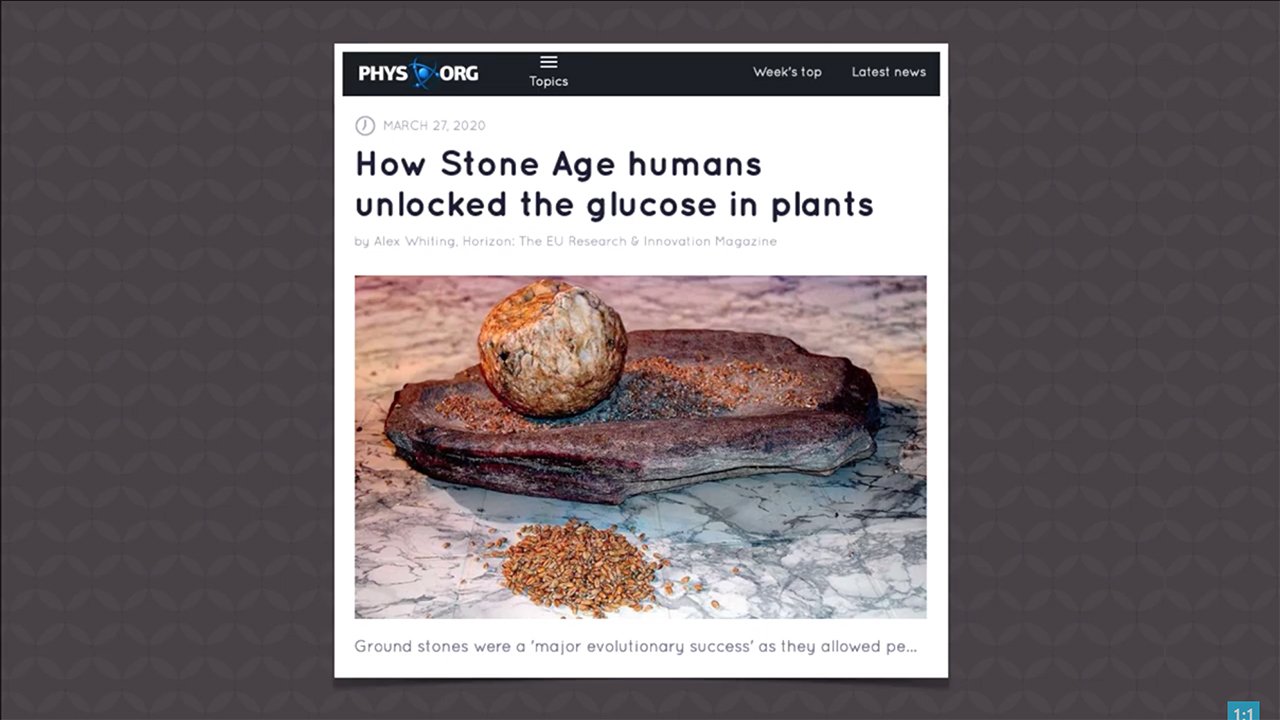 Acorn flour, bread made from cattail roots, and water lily tubers—do these sound appetizing? Well, maybe not to us, but according to a new study, ancient humans ate these foods and more. This study was exploring the diets of ancient man and they revealed a surprise (at least to those who think with an evolutionary worldview, anyway): past humans didn’t just eat meat—they ate plants, including plants they cooked or even ground into flour. This finding may be surprising to evolutionists, but it’s certainly not to those who start with God’s Word. It sounds normal for humans living in this fallen world.

This study claims that the discovery of the “ground stone” (a simple stone tool to grind food) was a key in our evolutionary success. With the ability to grind grains to make flour came the ability to unlock the glucose inside, which was important for nutrition.

this whole study is based on evolutionary assumptions about human evolution.

But this whole study is based on evolutionary assumptions about human evolution. The researchers believe we were hunter-gatherers (when we first came out of the trees, they’d say!) before slowly developing the technology to become farmers. Now, this view does not match with what Scripture teaches about early man. Within just a few generations of Adam, mankind was making musical instruments and working with bronze and iron (Genesis 4:21–22)—Adam himself was to care for the Garden of Eden (Genesis 2:15), before being driven out of it because of sin (Genesis 3:23). And his sons were farming and raising livestock (Genesis 4:2). So there’s no slow progression from primitive brute to hunter-gatherer to farmer. Also, man was vegetarian until God said humans could eat meat (Genesis 9:3).

So where does this supposed evolutionary progression come from? Well, because evolutionists start with the wrong starting point—millions of years and primitive man, descended from an ape-like ancestor—they interpret the evidence (tools of various materials, cave dwellings, etc.) incorrectly. The evidence doesn’t “speak for itself”—it’s interpreted within a worldview.

They weren’t unintelligent—they were surviving in a very difficult changed world.

When we start with God’s Word, we know the world was destroyed by a global flood and people were scattered at the time of the Tower of Babel, not long after the flood. The flood was followed by an ice age, and people living in certain climates during this rough time in history had to make do with whatever they could find. They weren’t unintelligent—they were surviving in a very difficult changed world. So it’s no surprise that some were hunting and foraging, using simple tools made from the available resources to prepare and cook this food. But at the same time, in other parts of the world, humans were innovating and using other materials (such as metals) to build their homes and modify the world around them.

So was the discovery of a ground stone key in our evolutionary success? No, humans were intelligent and knew how to cook and prepare food from the very beginning.

I discussed this item today on Answers News with cohost Dr. Georgia Purdom and special guest Tim Chaffey, content manager at the Ark Encounter. Answers News is our weekly news program conducted here at the Creation Museum and broadcast on my Facebook page and the Answers in Genesis Facebook page. We also covered the following topics:

Watch the entire episode of Answers News for April 6, 2020.