The Human Body—Wired for Extremes

God has equipped every human with backup systems that are programmed to respond to all sorts of emergencies.

You never know what unexpected danger might put your life on the line. But God knows, and He has equipped every human with backup systems that are programmed to respond to all sorts of emergencies.

Astronauts shivering in a broken-down spacecraft far from earth. A woman falling off a cliff. A backpacker encountering a furious bear at a bend in the trail. How could these people possibly survive?

Each depended on incredible biological emergency systems to stay alive.

We live in a cursed world where dangers lurk around every corner. Recognizing the potential threats to our lives, God provided our bodies with contingency plans, ready to activate at a moment’s notice. Whatever extra energy or infusion of chemicals our bodies need, whatever quick changes are required for us to make quick decisions or conserve precious resources, the brain is always ready to act.

The beauty of these emergency systems is that we don’t have to learn them. Every person begins life with these abilities, which are passed down through the generations, originating in our first parents, Adam and Eve.

Researchers are learning more and more about how our brain switches operations when thrown into hazardous situations. You may never face life-threatening situations, or you may face them only once, but in any case, God has equipped you to have a better chance of surviving. Consider just three examples.

The loud bang was unexpected. At first, the other astronauts thought a crewmember was playing a practical joke. But they soon realized the situation was serious. On April 13, 1970, Apollo 13 radioed home. “Houston, we’ve had a problem.”

Over the next few days, NASA’s Mission Control in Texas and the endangered astronauts banded together to solve nearly each problem thrown at them. They figured out how to preserve batteries and water. The NASA teams even managed to design a makeshift air scrubber to reduce the dangerous levels of carbon dioxide in the small spaceship. But one problem couldn’t be solved—the lunar module Aquarius was getting cold, almost freezing (around 38°F).

Initially, the heat given off by the computer systems helped to maintain the temperature in Aquarius, but later they were turned off to preserve the precious power. Three days after the explosion, the cold was nearly unbearable. The astronauts never slept. Fred Haise’s feet, after getting soaked from a leaky water dispenser, were half frozen. Their food turned into blocks of ice.

How did they manage to survive? Their brains were ready with a contingency plan that NASA could never imagine. 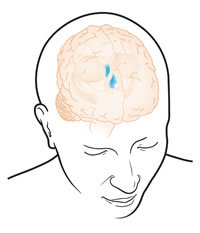 Alone and exposed to near-freezing temperatures, without warm clothes or heaters, and three days away from help. Could you survive? Yes! The brain’s hypothalamus is ready for just such emergencies, and it made the difference in the Apollo 13 mission.

One part of the brain, called the hypothalamus, regulates the body’s internal temperature. When we get too hot or too cold, the hypothalamus initiates emergency systems. When the temperature plummeted to a critical low, the astronauts’ hypothalamuses responded immediately.

The first defense was to generate heat. Muscles, like computers, produce heat when working. So the astronauts started shivering involuntarily.

The second defense preserved what heat their bodies still contained. As the temperature continued to drop, their brains stimulated the blood vessels just below the skin’s surface to constrict, keeping the blood deeper and warmer as it circulated.

Still, it got colder, causing slowed heart rates and digestion. Their brains initiated the next step. In an effort to protect the vital organs, their brains triggered the blood to concentrate around the heart and brain, keeping those key areas warmer and vital systems functioning. Fingers, toes, and other extremities were left to the cold.

God has equipped our minds and bodies with sophisticated contingency plans to help us survive in life-threatening situations.

As the astronauts’ bodies continued to cool, the nervous systems slowed, and clear thinking was hampered. The astronauts even struggled to understand and remember what Mission Control told them. Their brains were conserving all resources in an effort to survive, and logical thinking was unnecessary for immediate survival.

Finally, the end was in sight. After days of fighting the cold and fear, the astronauts buckled in, ready to restart the engine of the Command Module. Amidst cheers and more than a few tears, they entered earth’s atmosphere. The Apollo 13 mission is commonly known as NASA’s successful failure. The astronauts made it home, thanks, in great part, to the incredible design of their bodies.

Hiking alone through the Sierra Nevada Mountains in California had always been one of Amy Racina’s favorite pastimes. The beauty of the trees, the silence of the hills, and the warm August air filled Amy with peace and joy. Then the unthinkable happened.

Near the edge of a cliff, the ground suddenly crumbled underneath her feet. She tumbled into space with nothing to catch her but a granite slab 60 feet (18 m) below.

When Amy woke up, she waited for pain to overwhelm her. It didn’t. So she sat up and assessed her situation. Her hip was broken in two places, her right kneecap had shattered, and she noticed several other minor fractures, sprains, and dislocations.

Amy knew she was badly hurt, so why wasn’t she overwhelmed with pain? 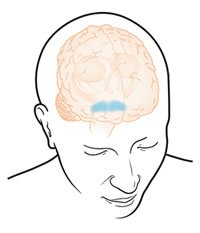 Isolated in remote mountains, her body broken and bleeding after a sixty-foot fall, how could Amy Racina hope to survive? Her brain’s periaqueductal gray went right to work, recognizing the threat and initiating an extraordinary survival strategy.

In extreme emergencies, our brain can block pain. If Amy had felt the full force of the pain from all of her injuries, she would have been unable to bind her wounds and drag herself the mile and a half to the nearest trail. The trail offered the only hope of rescue before she bled to death.

Typically, pain is a good thing. It warns us of injury or sickness. It tells us when to slow down or when we’ve done too much. Few things send us to the doctor faster than intense pain. If we never felt pain, we would rarely notice when we hurt ourselves.

But in life-threatening situations, it’s not always good to feel pain. Soldiers in the midst of battle don’t always have time to treat bullet wounds. Long-term survival may demand their full attention on the enemy, so the brain can temporarily block the pain.

But how can our brains block pain? Scientists are still trying to understand the details, but the gate control theory suggests that the paths between pain-transmitting nerves can be blocked by natural pain killers.1 Normally, nerves at the injured site send signals along a path to a projection neuron (the gate) located in the spine, which then forwards the message to the brain.

Once rescuers arrived to lift Amy by helicopter to a hospital, pain flooded over her. The temporary lull in pain had saved her life. Now it was time for the normal process of rest and healing to begin.

Hiking in the middle of the remote forest in the USA’s Yellowstone National Park, 22-year-old Josh Beattie turned the corner and nearly stumbled over a grizzly bear cub at play, blocking his path. But mom was there, too. Suddenly, his heart raced, his breathing increased, and his muscles tensed.

What was happening to Josh?

His brain was preparing to fight or flee. At the first sign of danger, before the problem is fully processed by the logic center, our brain already kicks into gear. In many cases, like touching a hot stove, if we waited until we consciously understood the dangers, our reaction would come too late.

So how does this fight-or-flight system work?

When danger nears, the hypothalamus (the same part of our brain that regulates body temperature) “flips a switch.” Before we have time to think, our brain speeds ahead of us, ordering the release of appropriate chemicals. Our brain also increases blood flow to the muscles, allowing for quick action. Breathing deepens to elevate oxygen intake. Heart rate and pressure increase to speed oxygen delivery. Many nonvital systems temporarily shut down. Growth, digestion, and the immune system stop functioning so that energy is not wasted on systems not required for immediate survival.

But the brain acts differently if the danger is farther away. According to one study, the distance of the threat relates to the area our brain uses to face it.2 If the angry mother bear appears far away, the part of our brain used for strategy (called the ventromedial prefrontal cortex) activates. But as she draws closer, the focus switches to the fight-or-flight part of our brain, known as the periaqueductal gray (the same part that controls feeling pain). Essentially, the brain seeks to implement an escape plan before momma bear gets too close.

Far from any trail, hiker Josh Beattie stumbled on two bears, only 25 yards away. Would he survive? Before he even had time to think, his brain initiated emergency procedures. The hypothalamus (see previous image) ordered more blood to the muscles, increased his heart rate, and deepened breathing. Then the periaqueductal gray (see previous image) prepared him to make the ultimate decision: escape or fight?

Time is up. Which will you choose, fight or escape? The answer comes down to the individual. Whether we run or fight is not always clear-cut, and the decision depends on our emotions and the situation. But no matter the emergency, God designed the human brain with the specialized capabilities to help us survive, be it day-to-day hassles or perilous threats to life.

The End but Not the Limit

At the same time that mankind explores the deep mysteries of the oceans and the awesome glories of the heavens, where the Creator’s genius is clearly seen, we are just as amazed by the intricacies scientists constantly discover in the human brain.

The same God who displays His power in space reminds us about His loving care in our own bodies and minds. From the very beginning, God provided for His children even before such protection was needed. Adam and Eve were well-equipped to survive in a fallen world, and so are we.

When it comes to God’s marvelous creation, nothing compares to the amazing design of the human body. From the protective garment of skin to the engineering of our bones and new discoveries about our brain, this issue is packed with testimony to the Master Designer.