Rehab for Your Feet

Can the damage done to our feet by shoes be undone by going barefoot?

The human body—or at least many parts of it—is somewhat plastic, meaning that anatomy can be altered by outside forces. Muscles can grow bigger with constant exercise. They can also get smaller from lack of use. The same goes for bones: the humerus bone in the serving arm of a professional tennis player, for example, is usually thicker and stronger than the humerus in his or her non-serving arm. In addition to exercise (or lack thereof), binding of body parts can also create anatomical changes. The most famous example is Chinese foot binding that occurred for over 1,000 years in Asia before the practice was finally outlawed in the 20th century.

Surprisingly to many people (though not so much after you take time to think about it), modern shoes are a mild form of foot binding. It is now well established that shoes, as binding devices, change both the structure (i.e., anatomy) and consequently the function (i.e., biomechanics) of the feet. Over 100 years of data have been amassed that all point to this conclusion. The numerous changes that shoes make to our feet are documented in The Barefoot Book, but since the book was published in 2010 scientists are asking a new and medically important question: Can the damage done to our feet by shoes be undone by going barefoot?

Although this is a brand new field of study and much work remains to be done on this exciting question, the answer already appears to be . . . yes and no. Below are some of the most common foot ailments caused (or exacerbated) by shoes and my predictions on the likelihood—based on the latest research, anecdotal evidence, and a good knowledge of the human body—of whether the damage is permanent.

Bunions are bony outgrowths that occur most commonly on the feet at the big toe joint. The condition usually accompanies Hallux valgus, but not always. Hallux valgus is an abnormal bending of the big toe (Hallux) toward the other toes, often even causing the big toe to overlap the second toe. Bunions/Hallux valgus are caused by wearing shoes that are too small and have a narrow, pointed toe box; elevated heels exacerbate the problem. According to the American Academy of Orthopaedic Surgeons, “Nine out of ten bunions happen to women. Nine out of ten women wear shoes that are too small.”1 The propensity for women to get bunions, together with the observation that bunions run in families, suggests a genetic component to this condition. However, women are more likely than men to wear bunion-producing shoe styles (e.g., high-heeled shoes), and women within families often have similar shoe-wearing habits. Even if there is a real genetic component to bunions, the trait seems to be expressed only in shoe-wearing societies, so it appears there may be only a genetic propensity to getting bunions. Regardless, bunions and Hallux valgus appear to be permanent deformities; once acquired they remain, and no good evidence exists that going barefoot will reverse the condition. However, staying out of bunion-forming shoes and going barefoot can likely slow down or stop the progression of this deformity.

This is perhaps the most exciting area for rehabilitation of shoe-deformed feet. Thousands of runners have tossed their shoes in the past three years since the publication of Born To Run (Christopher McDougall), The Barefoot Book (Daniel Howell), The Barefoot Running Book (Jason Robillard) and several other books (and hundreds of articles) covering the topic of barefoot running. Those of us heavily involved in the barefoot running community are hearing many reports about changes in runners’ arches. I personally have received so many reports that I’ve undertaken a formal study of arch rehabilitation by increased barefoot activity. Since this is an active area of research with good potential for publication, I cannot publish my results here, but I can say that people are seeing dramatic changes in foot arches from going barefoot frequently. If you have flat feet you most likely do not need arch supports! On the contrary, it appears that you can strengthen and lift your arches by simply walking barefoot (or running barefoot) as much as possible.

Hammer toes and crooked toes are a common, often ignored, problem. Many people with these conditions just say they have “ugly feet” and keep them hidden in shoes, which of course likely aggravates the problem. Since these conditions are rare in societies where people often live barefoot, they seem to be caused primarily by shoes that are too small, especially shoes with narrow, shallow toe boxes. According to MedlinePlus (a service of the U.S. National Library of Medicine), hammer toe in children can be corrected by using a splint and wearing shoes that fit properly (they say nothing about barefooting as a solution). MedlinePlus also suggests picking up a towel with the toes to exercise the intrinsic foot muscles.2 While picking up towels may be fun for a few minutes, I am convinced that there is no better exercise for your feet than the very natural act of walking barefoot. It can be done all day with ease, and the absence of a confining shoe will naturally allow the toes to spread and rehabilitate. As for adults, I have received stories from people who’ve tried barefoot living, and some claim their toes have straightened as a result. 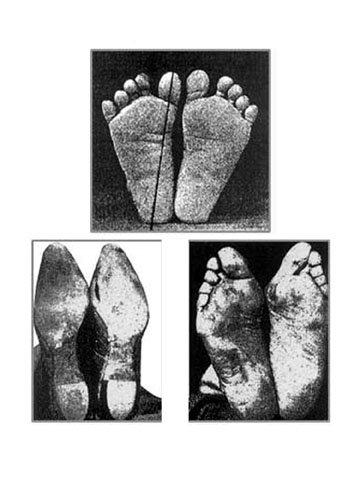 A photo taken in 1905 by Dr. Philip Hoffman comparing the feet of a Filipino man who had never worn shoes to the feet of a Westerner.

Many people think that corns and calluses will develop by going barefoot, yet approximately 1 in 40 Americans—about 7 million people—suffers from calluses.3 My bet is that these are shoe-wearing people. Corns and calluses (both of which are thickenings of the skin) develop in response to constant pressure or rubbing on the body. On the feet, the usual source of this pressure and rubbing is shoes. Both corns and calluses can be eliminated (and prevented) by avoiding shoes and going barefoot. Although going barefoot will not produce corns and calluses, frequent barefooting will produce a supple, yet leathery, tough surface on the sole of your foot.

While these conditions are not anatomical deformities, they are common foot infections caused by footwear. According to the American Academy of Dermatology, going barefoot is the best way to prevent (and cure) athlete’s foot.4 Toenail fungus can often be more persistent than athlete’s foot, but once eliminated its reappearance can be curtailed by staying barefoot. Again, no scientific studies have directly examined whether barefooting can eliminate toenail fungus, but anecdotal evidence (and logic) suggests shoes are part of the problem, not the solution.

Once you properly understand the biomechanics of walking, it becomes rather obvious that most shoes profoundly inhibit the proper workings of the feet and cause them damage over time. Indeed, shoes cause problems with our ankles, knees, hips, and spine as well as the feet. In addition to higher arches and straighter toes, many people have observed their feet getting wider after adopting a barefoot lifestyle. This is not surprising given the confining nature of shoes. When barefoot, the feet are able to expand freely during the weight-bearing phase of walking; it is logical that this could lead to naturally wider feet over time. Finally, many people report reduced swelling in the feet and ankles by going barefoot, most likely due to improved circulation of lymph and blood in feet that are allowed to flex and twist and move freely. Feet that are left bare tend to be healthier in appearance since the skin is exposed to sun and wind and not soaked in moist, dark shoes all day.

The science behind shoes and feet is both old and new. It’s been known for well over one hundred years that shoes deform our feet and cause numerous infirmities, but only now is research being done to see if shoe-induced ailments can be undone by taking off our shoes and returning to our bare feet for ambulation. I am convinced that barefoot walking is best and I hope that—as we’ve done with cigarettes—our society can one day kick the shoe habit.