One Leg Up On Architects

When it was completed in 1889, the Eiffel Tower was hailed as a marvel of man’s engineering. But its basic design was actually borrowed from the work of an ancient designer—the Creator, who engineered the human femur.

To show off the latest advances in technology, France hosted a world’s fair in Paris in 1889. Organizers held a competition among architects to propose daring new structures to commemorate the grand event. One French engineer, Gustave Eiffel, went to an unusual source for new design ideas—the work of a specialist in human anatomy, Herman von Meyer.1

In the 1850s, Meyer had studied the human femur, or thighbone, which connects to the hip. This bone, the largest in our body, has an unusual off-center ball joint that fits into the hip socket. For strength, the bone’s curved head has many internal bone fibers, called trabeculae. These bone fibers crisscross each other in layers and are precisely aligned to withstand the varying forces of tension and compression. As a result of this ingenious design, the femur efficiently supports and transfers the off-center weight of the person. The femur’s ball joint may look awkward, but it functions superbly for a lifetime of movement unless bone disease interferes. 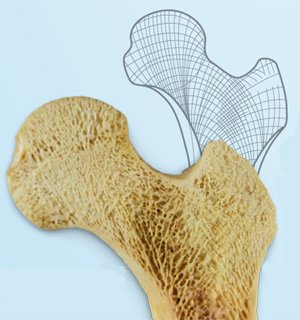 In the early 1860s, engineers realized that the human femur (above) is made up of mathematically precise, crisscrossed patterns of fibers (called trabeculae) that reduce the bone’s weight while giving it maximum strength against multiple forces. This exquisite design inspired the architect who designed the Eiffel Tower.

Swiss engineer Karl Cullman later generated mathematical models of the femur design.2 In the late 1860s he noted that the trabeculae fibers closely resembled the struts and braces used in buildings. Architect Eiffel then took these ideas and designed his famous Eiffel Tower, the tallest structure in the world at that time, to be built with a minimum amount of iron for maximum strength. The outward flares at the base of the tower resemble the upper curved portion of the femur. The internal wrought-iron braces used in the tower closely follow the design of trabeculae within the femur.

The Eiffel Tower has been a Paris landmark for over a century. Including its antennas, the tower reaches a height of 1,063 feet (324 m), or 81 stories. The tower marked the entrance to the 1889 exhibition and was originally built as a temporary structure. Competing architects scoffed at the tower, calling it an eyesore and predicting that it would collapse under its own weight. However, it remains today, over a century later, a Paris landmark. It is the destination of millions of tourists annually.

The Eiffel Tower today is considered a work of art. A true marvel of human engineering, its elegant design was originally based on God’s design of the human body. As Psalm 139:14 declares, we are fearfully and wonderfully made.

Previous Article Brain Next Article What Would Jesus Eat?

When it comes to God’s marvelous creation, nothing compares to the amazing design of the human body. From the protective garment of skin to the engineering of our bones and new discoveries about our brain, this issue is packed with testimony to the Master Designer.