It's not so modern!

The earliest evidence we have of public health and sanitary practices is found in the first five books of the Bible, the Pentateuch.

The earliest evidence we have of public health and sanitary practices is found in the first five books of the Bible, the Pentateuch.

In these writings, the Israelites were instructed to isolate, and if necessary quarantine, those who were sick.1 They were to destroy contaminated objects,2 to burn used dressings,3 and to bury fecal waste outside of the camp.4 The Israelites were prohibited from eatansing animals which had died of natural causes.5 They were also admonished to practise personal hygiene by hand-washing and keeping clean, and to take certain precautions when touching the infected or deceased.6

These same regulations applied to a woman for a specific number of days following childbirth.7 Furthermore, it was clearly forbidden for the Israelites to engage in any sexual relationships outside of marriage.8 Sexually transmitted diseases today would virtually disappear if sexual activity were confined to marriage, consisting of the biblical plan of one husband and one wife (Genesis 1:27 and 2:23,24). 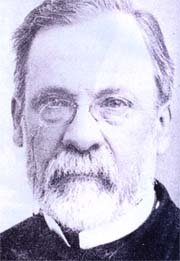 Millions of people today are living happy and healthy lives because of health and sanitary procedures encouraged by such people as Louis Pasteur.

'If thou wilt diligently hearken to the voice of the Lord thy God … I will put none of these diseases upon thee' (Exodus 15:26).

It is generally accepted that modern medical science came about in 1876 when Louis Pasteur and Robert Koch demonstrated (almost simultaneously and unknown to each other) the idea that contagion passes from one individual to another.

The discoveries made by these men, however, were ignored and even scornfully rejected by virtually the entire medical establishment of their day. Medical scientists and practising physicians fiercely defended the age-old Greek philosophy that microbial life could be generated de novo under certain conditions.

Life Comes Only from Life

Through careful experimentation, Pasteur and Koch were able to demonstrate irrefutably that even the simplest of living things did not arise spontaneously from non-living matter. More importantly, Koch proved that particular kinds of microbes were responsible for particular kinds of maladies.

'I have taken my drop of water from the immensity of creation, and I have taken it full of the elements appropriate to the development of microscopic organisms. And I wait, I watch, I question it! — begging it to recommence for me the beautiful spectacle of the first creation.

'But it is dumb, dumb since these experiments were begun several years ago; it is dumb because I have kept it sheltered from the only thing man does not know how to produce; from the germs which float in the air, from Life, for Life is a germ and a germ is Life. Never will the doctrine of spontaneous generation recover from the mortal blow of this simple experiment!'9

The refutation of spontaneous generation, and the establishment of the germ concept of disease, was one of the greatest contributions ever made to the saving of human lives. Had this not been done, physicians might still be devoting their efforts towards combating disease-producing organisms that were thought to have arisen spontaneously from within the patient's body.

Health and Sanitary Practices Listed in the Pentateuch

Today, physicians know that pathogens do not arise spontaneously, but are the descendants of parent organisms that were originally transmitted from outside the body. Equipped with this evidence, Pasteur and others11 prevailed on surgeons and medical practitioners to adopt health and sanitary procedures that are strikingly similar to those recorded in the Pentateuch 4,000 years earlier.

The results were spectacular. Millions of lives were and have been saved.

Modern Medicine in the Bible

It is clear that the facts of modern medicine agree marvellously with the Bible. For example, the Mosaic regulations pertaining to childbirth, sexual relationships, hand-washing, wound and discharge care, quarantining, burial precautions, and waste disposal are examples which indicate that diseases are communicable, and that the best protection against them is to prevent their spread.

In Genesis 1:24 and 25 we read that God commanded all living things to reproduce 'after their kind'. Preventive medicine becomes possible with the knowledge of this truth alone!

As has been said, although the Bible is not a science text, whenever it speaks of scientific matters it speaks truly and accurately. The explanation of this phenomenon is that the Bible is what it claims to be: the inspired Word of God.

What is certain in any case is that no constructive progress in medicine was possible until the ancient evolutionary doctrine of spontaneous generation was discarded. The fierce battle to destroy this superstitious myth regarding the origins of microscopic life is surely one of the most exciting sagas in the long development of modern medicine.