Experiment—Iron: Toxin on the Table

Rusty old iron is toxic to our bodies. Yet God designed all living things to depend on a steady supply of iron to continue living. So how does His exquisite design safely transfer iron from the dirt to our bodies?

Your body depends on a wide range of potentially toxic minerals to survive. One is iron. If taken in its pure form, iron would kill you, but the Creator God put in place an elegant system to supply your daily iron without adding rusty nails to your breakfast.

By God’s design, we get iron from our food. Some foods have more than others, but all have iron. There are two different forms of iron, heme-iron and non-heme iron. Heme-iron, found in meat, fish, and poultry, is approximately three times more absorbable than the non-heme iron, which is found in vegetables, fruits, dried beans, nuts, grain products, and dietary supplements.

In fact, if you blended tonight’s dinner and ran a magnet through it, you’d discover bits of iron clinging to the tip of the magnet! So why is iron so important, and how do we get it safely into our bloodstream?

Some 96% of our body is made of four common chemicals: hydrogen and oxygen (75%, mostly water), carbon (18%), and nitrogen (3%). The remaining 4% consists of many different minerals, such as sulfur, magnesium, and iron. Although some of these minerals come in small “trace” portions (only 3 grams of iron in an adult male), each is essential for life.

Consider iron. Most of our iron is needed in the hemoglobin of our red blood cells. It captures oxygen from the air during each breath and transports this life-giving element down to our tissues. (Iron is a building block for the hemoglobin that contributes to the red color of our blood.)

Iron also plays an important role in storing oxygen in our muscles, giving them a ready source of energy.

Iron appears in the liver as well, where it helps make poisons harmless. Iron is so important to the human body that we possess many complex mechanisms to regulate the absorption of iron from our food. We do not even need a special mechanism to get rid of it. The fact that our body absorbs only a limited amount of iron appears to be part of God’s design to limit its uptake.

Not just humans but all living things require iron. For example, one important type of bacteria needs iron in an enzyme so it can break down the otherwise unbreakable bonds of nitrogen gas. Plants depend on this steady supply of useable nitrogen to build DNA, as do all other creatures. Eventually this nitrogen shows up in all the food we eat. Without the iron that originally appeared in the lowly bacteria, all plants, animals, and people would perish!

But here is an interesting paradox. Iron can be toxic if we get too much. Iron reacts vigorously with other chemicals, and it especially likes to bind with oxygen. This explains why metal rusts so quickly and oxygen is so corrosive. If organisms were not designed to carefully control iron’s chemical reactions, it would bind too tightly to the oxygen instead of releasing the oxyen where needed. It would be deadly to single-celled organisms and human beings alike.

So God designed highly complex mechanisms to extract iron from the earth and safely deliver the right quantity to our bodies without killing us. If these systems were not in place from the very beginning, nothing would have survived. The same pattern appears over and over again. Living organisms need many molecules that would be toxic unless complex mechanisms were already in place to control them.

If you believe in creation, all this makes sense. The Creator carefully placed iron into the design of living things, which already contained mechanisms to keep this mineral in check. The loving Designer of life then made it easy for us to obtain iron simply by eating a salad, a hamburger, or our favorite breakfast cereal. 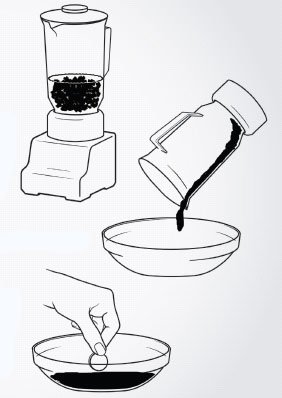 Does a bowl of cereal really contain visible amounts of iron? Try this simple experiment and see for yourself!

Pour at least one cup of cereal into a blender.

Cover the cereal with hot water and let it soak for five minutes.

Blend the cereal for at least one minute. (The more finely ground it is, the better.)

Pour blended cereal onto a plate or glass bowl.

Stir the magnet through the cereal, especially at the bottom. (Iron sinks.) Be patient.

Gently rinse the magnet and wipe it on a paper towel. Look for black fuzz that remains on the magnet. These are tiny shavings of iron.

Optional: Try different kinds of cereal, including one that is heavily “fortified” with extra iron and one that is not. Do you see a difference? If you want to perform a careful experiment to measure the actual amounts of iron and do a comparison, visit www.sciencebuddies.org and search for “Mag-nificent Breakfast Cereal.”

Dr. Joe Francis, Chairperson of the Department of Biological and Physical Sciences and Department of Mathematics at The Master’s College, earned his PhD from Wayne State University and completed a postdoctoral fellowship at the University of Michigan Medical School. Dr. Francis serves as a board member of the Creation Biology Society.
Previous Article Does God Hear? Next Article Environmental Clean-Up Crew