Eating Out in Eden

Cancer, constipation, or coronaries. Much of the food we eat has at some time been blamed for causing one or more of these, and then some. In the past few years we've been swamped with more dietary advice than ever, with the result that many of us suffer something else starting with c — confusion.

For example, olive oil was supposed to be terribly bad for us, clogging up our arteries. A few years later it became, supposedly, the best type of oil for our increasingly heart-conscious population. Who knows what tomorrow's headlines will bring? It is easy to become rather cynical about it all. However, amid all the vacillation, one thing is emerging as a clear, consistent trend; something which is not surprising when one considers the real history of humanity as given in Genesis.

More and more studies are confirming that, in general, eating 'natural, whole' foods, mostly or wholly from plant sources, results in better health. Few experts would disagree that the following type of diet, combined with regular exercise, constitutes a very healthy life-style and greatly reduces the risk of health problems.

The majority of our intake should consist of starchy (complex carbohydrate) foods like potatoes, rice, and other cereal foods, especially whole grain varieties. Fresh fruit, vegetables, and nuts should also play a big part. Contrary to the custom of many of us in Western countries, protein foods, like milk, eggs and meat, should play a lesser part. Increasingly, it seems that fat should provide by far the smallest portion of our daily intake of food energy.

Countries such as Japan, which has traditionally had a diet of mostly rice, vegetables, and fish, have very low rates of heart disease. When people from such places adopt a Western diet of processed, high-fat foods they experience higher rates of heart disease, similar to their Western counterparts.

The indigenous people of Australia, who once supplemented their diet of nuts, seeds, fruit, and (especially root) vegetables with occasional fish and meat, now frequently have a diet very high in deep-fried snack (fast) foods and soft drinks. Diseases that were virtually unheard of in such populations, such as diabetes and coronary artery (heart) disease, now affect them at an alarming rate.

These effects cannot be argued away as purely genetic differences. Studies of vegetarian groups within Western populations, such as Seventh-day Adventists, show lower rates of heart disease and cancer and, on average, longer lifespans than matched (i.e. non-smoking, etc.) control populations.

This all makes sense when you consider the way God originally intended it to be in the Garden of Eden. In Genesis 1:29 God says:

Behold, I have given you every herb bearing seed, which is upon the face of all the earth, and every tree, in the which is the fruit of a tree yielding seed; to you it shall be for meat [i.e. food].

Adam and Eve would clearly have enjoyed a wide variety of plant foods such as fruits, vegetables and nuts. As people were permitted to eat meat only after the Flood, their problem would not have been excessive fat intake. A healthy outdoors lifestyle, and clear running water that would have been 'always the real thing', add to the picture. No 'golden arches', either.

Immediately after the Flood, however, we read in Genesis 9:3 that God decreed to mankind:1 'Every moving thing that liveth shall be meat for you; even as the green herb have I given you all things.'

Since the evidence indicates that our bodies were designed to suit a low-fat, whole-food/vegetarian lifestyle, which still appears to be better for us today, why then did God relax an apparent ban on the eating of meat?2 We are not told, but one strong possibility presents itself.

There is no record that Noah was required to take any plants or their seeds aboard the Ark, nor that it was necessarily God's intention that all plant kinds (unlike air-breathing animals) should survive the Flood. So, not surprisingly, many of the plant types in the fossil record are not around today.

The list of extinct plants includes many which appear to have been widespread. Perhaps many plants which previously provided an abundance of the right types of protein and other nutrients needed for optimum health were among these.

Nowadays, it is certainly possible to maintain the right amount and type of protein, iron, and vitamin intake without meat. However, especially if milk and eggs are also omitted (a so-called 'vegan' diet), there is at least a theoretical risk of some nutritional deficiency unless there is some knowledge of how to balance the right kinds of vegetable protein, etc.

In our society, which as a whole has learnt a great deal about nutrition, there is enough of this background nutritional 'know-how' so that in practice one rarely, if ever, sees such deficiency in vegans. However, for many centuries after the Flood, there is no reason to suppose that such specialized knowledge was available. Under those circumstances, having animal food sources freely available would have greatly reduced the risk of any such problem.3

If the above speculation is valid, then God's permitting (some would say requiring, though that might be stretching the text somewhat) people to consume meat (after the Flood had caused the extinction of a previously greater range of plant foods), may be seen as an act of gracious provision. Those pre-Flood people who obeyed His (implied) pre-Flood prohibition on consuming meat would have, on present evidence, experienced better health than those who did not.

So what of the Christian today? On the one hand, it seems obvious that as believers, we should not abuse our bodies, which are the temple of the Holy Spirit (1 Corinthians 3:16; 6:19). Many in Christendom who would rightly frown at the self-abuse and health risks of smoking, for example, sometimes actively invite ill-health by over-indulging in heavily processed, high-fat foods, while exercising little. For those seeking sound, moderate guidelines to healthy living, the answer is in Genesis: the more 'Edenic' our lifestyle, the better health we are likely to enjoy.

Does this mean we should join the crowds caught up in the modern cult of body worship, puffing their way through an endless round of frenzied gym routines, mineral waters and the latest food fads in an effort to stave off their inevitable date with death? Once again, the answer is in Genesis. All of us, as Adam and Eve's descendants, are under the curse of death, so there is no point in becoming too obsessed with our (temporary) body. Only those who have put their trust in Jesus Christ, the 'seed of the woman' promised in Genesis 3:15, can look forward to an eternal future with 'no more curse' (Revelation 22:3).

(Since individual medical situations vary greatly, this brief article is meant as a general guide only, and not as a substitute for any nutritional or medical advice otherwise obtained.)

If fat is so bad for us, why do we often crave it? Some evolutionists have said that it is because, in our primitive hunter/gatherer past, it was a survival advantage to be 'programmed' to store as much fat as possible between 'kills'. This becomes to them another 'proof' of evolution: why, they argue, would a wise and loving Creator have programmed us for a self-destructive behaviour?

However, it may be that the craving is at least partly due to our inappropriate food choices in the first place. Those who make the switch away from high-fat foods find, interestingly, that their craving gets generally less with time. In any case, in the biblical picture of human history, having a desire to seek out at least some fat would still have been necessary. Storing fat would have been useful for times when there was less food around, or when nutritional demands were increased, such as in pregnancy.

Also, our bodies need some dietary fat for good health. In the intended pre-Flood vegetarian situation, there would have been plenty of non-animal fats around (think of all the plant-derived oils we use today — peanut, olive, sunflower, canola) but these would have been in unprocessed form. To crunch your way through high amounts of sunflower seeds is quite different from the 'fast fat fix' available in most snack foods. So in this situation, a built-in desire for fats would have been beneficial without much risk of fat overload.4 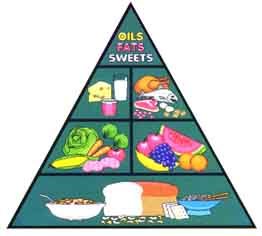 Eating towards a healthier life

A government health brochure on nutrition recommends you eat more of the items in the lower sections of this food pyramid (such as breads, grains, cereals), and little of the top sections (such as butter, oils, margarine). The five main food groups are: bread and other cereals, fruit, vegetables, meat or meat alternatives, milk and milk products (cheese, yogurt, etc.).