Family’s desire to educate their children ends in forcible abduction of the children by the state.

Imagine you live in a free nation. And one day you see twenty armed law enforcement officials show up at your neighbor’s door with a battering ram prepared to force entry. You watch them haul away four children, aged 7–14, by force. You hear an officer tell the parents they won’t be seeing them again “anytime soon.”

You’ve never seen your neighbors do anything “suspicious,” but now you must think they were secretly abusing their children. Or perhaps they were terrorists! This scene, as recounted by the U.S.-based Home School Legal Defense Association, recently took place in a quiet village near Darmstadt, Germany. The Wunderlich family’s only crime: they provide their children’s education in their home.

Dirk and Petra Wunderlich, following their convictions that they should educate their children themselves, for four years have been seeking a new home within the European Union. Failing to find employment, Mr. Wunderlich last year had to bring the family back to their home country of Germany. Within days the “Youth Welfare Office” was granted legal custody of their children on the grounds of criminal truancy. The court noted the children were well treated, however, and left them in their home, but authorities—in violation of European Convention of Human Rights—confiscated the children’s passports to ensure they could not escape Germany again.

The sole charge against the family is their failure to cooperate with authorities by sending their children to school outside their home. Yet on August 28 Judge Koenig of Darmstadt family court signed an order to seize the children. He even authorized the use of force “against the children” because the children had likely assimilated their “parents’ opinions” and would be uncooperative. Indeed, the oldest child, a girl, was taken from her home by force. 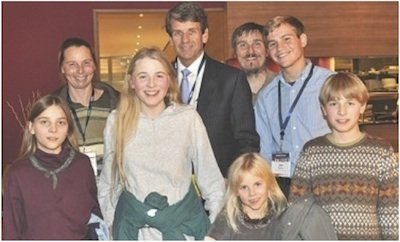 Dirk and Petra Wunderlich and their four children met with HSLDA chairman Mike Farris October 2012 during the Global Home EducBerlin. At the conference, Farris explained the large body of international law supporting the fact that freedom to home educate children is a protected human right. Germany has now violated that right by forcibly removing these children from their parents’ custody. Farris is encouraging a worldwide public outcry of support for this family’s rights. Contact information is provided at hslda.org. Image from HSLDA.1

Human Rights: Not Just for U.S.

According to Home School Legal Defense Association (HSLDA) founder Michael Farris, “The United States Constitution is not alone in upholding the right of parents to decide how to educate their children. Germany is a party to numerous human rights treaties that recognize the right of parents to provide an education distinct from the public schools so that children may be educated according to the parents’ religious convictions. Germany has simply not met its obligations under these treaties or as a liberal democracy.”

These treaties include the United Nations Universal Declaration of Human Rights, which recognizes that “parents have a prior right to choose the kind of education that shall be given to their children.” A prior right means a right that supersedes the rights of the state. The International Covenant on Civil and Political Rights and the International Covenant on Economic, Social, and Cultural Rights also ensures that signers will have “respect for the liberty of parents . . . to ensure the religious and moral education of their children in conformity with their own convictions” and “to choose for their children schools, other than those established by the public authorities.” Germany has signed these treaties but is plainly ignoring its espoused responsibility to its citizens—including this family and many others—and to the cause of human freedom.

Farris says, “HSLDA and I will do whatever we can to help this family regain custody of their children and ensure that they are safe from this persecution. This case demonstrates conclusively why the Romeike asylum case is so important. Families in Germany need a safe place where they can educate their children in peace.”

Recall that another German homeschooling family, the Romeikes, was originally granted asylum in the United States.2 United States law allows asylum to be granted for violation of human rights including religious persecution and persecution for membership in a “particular social group.” The Obama administration’s Department of Justice successfully sued to revoke the Romeike’s asylum several months ago.

Fighting (and Praying!) for What Really Matters

Answers in Genesis’ current emphasis is on rescuing children from lies—lies that tell them they are just highly evolved animals, lies that tell them that all that is came into being through natural processes, lies that tell them there is no Creator and that God’s Word cannot be trusted. Much of our work involves equipping families with the answers their children need. Children and adults need to understand the reasons they can and should trust God’s Word, for only through the gospel of Jesus Christ—proclaimed in the New Testament but rooted in the very beginning of God’s Word (Genesis 3)—can they be ultimately saved from the lies of Satan and their own rebellion against God.

The battle rages on for the hearts and minds of children in the United States as elsewhere. That battle has many fronts. One is the media, rife with propaganda continually bombarding the public with the assertion that evolutionary beliefs are proven facts. Another is public schools where restrictions on free discussion and intimidation limit the ability of teachers to equip children to think critically about the claims of evolution. Academic freedom in public schools as well as the right of parents to educate their children as they choose are inherent facets of the First Amendment freedoms of religion and speech guaranteed to Americans by the United States Constitution’s Bill of Rights.

Those of us who maintain that the Word of the Creator of the universe can be trusted from the very first verse work to provide answers to equip children and adults to understand science as well as the suffering in the world in the light of God’s Word. At the same time, we as Bible-believing Christians must not take for granted our freedom to speak the truth. Germany, a nation that climbed out of totalitarianism over sixty years ago, is afraid to allow families to teach children their own moral and religious values and does not flinch from violating its own treaties to stop them. Even as we speak out against Germany’s violation of human rights by contacting German officials on behalf of the Wunderlichs, we need to remain vigilant to guard against encroachments that chisel away at the freedoms we have in our own country. We need to not only guard our freedom but also use it wisely to equip our children by helping them build an unshakable trust in God’s Word and Jesus Christ whom it proclaims to be our Creator (Colossians 1:16–17) and Savior (John 3:16; Acts 2:12; Romans 6:23; 1 John 4:14–16). And as the Bible teaches in so many places (e.g., John 15:18–27; 2 Timothy 3:12; 1 Peter 1:6–9), we need to teach ourselves and our children so that we are prepared to endure persecution (in whatever form) in a faith-filled, Christ-honoring away, as so many Christians today (in many countries) and down through the centuries have suffered.

Let us also remember the Wunderlichs and the Romeikes in prayer in these difficult days.