Q: A “fossil” clock—what does it mean? 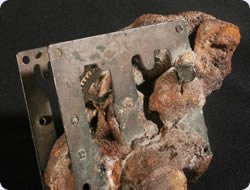 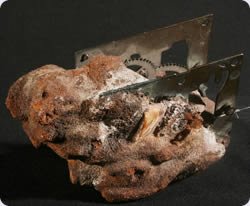 A: Because of the intense evolutionary indoctrination we’ve all received, most people assume that it takes millions of years for sediment—like sand or mud—to harden into rock. But given the right ingredients, this can actually happen quickly. Mixing cement is an obvious example, by the way.

Take a look at the picture of the mechanism of a clock encased in solid rock, along with sea shells. Of course, no one believes this clock was made millions of years ago. The clock was found in 1975 near a jetty at Westport, Washington. We know that there have been many shipwrecks in this area.

Technically, this clock is not a fossil. By definition a fossil is any remains, impression, or trace of a living thing, and this clock therefore does not qualify.

But it has been encased in sediment that rapidly turned to rock. Obviously, the right mix of chemicals dissolved in water that wet the sand reacted to harden the sand around this clock, making it a clock in hard rock!

There’s really nothing spectacular about this at all—these sorts of things happen in different parts of the world all the time given the right conditions. But the average person doesn’t usually hear about them, and thus they go on thinking that rocks (and fossils) must take millions of years to form.

This “clock in the rock” will eventually be displayed in our Creation Museum near Cincinnati, where we’ll be teaching people the truth about the history of the world . . . according to the Bible.