Understandably, Dr Austin’s devastating research into radioisotopic dating has been criticized by those who believe in millions of years. One common tactic is to claim that Dr Austin is ‘not an expert in the field’. This is quite wrong. Dr Austin carefully designed the research to counter all possible objections. 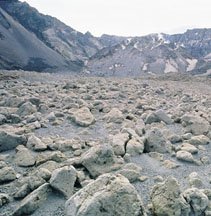 One critic said that Dr Austin should not have sent young samples to the dating laboratory because it potentially puts ‘large error-bars on the data’. By this reasoning, the method could not be used on any rocks, since, if we did not see the rocks form, how would we know whether they are young? Anyway, the analytical error is reported by the laboratory (see ± values on Table 1), and in every case the error is much less than the supposed age of the sample.

Some have argued that the magma (underground lava) must have picked up chunks of old rock as it moved through the Earth. They claim that these pieces of old rock (xenoliths) contaminated the sample and gave the very old age. This criticism is unfounded because Dr Austin was particularly careful to identify xenoliths and ensure none were included in the sample.1

Of course, it would always be possible to claim that the sample contained xenoliths that Dr Austin did not see. This would not be the first time this rationalization has been used. Dalrymple, for example, described a case where the date was wrong, but xenoliths couldn’t be seen under the microscope. He suggested that excess argon from microscopic xenoliths which were somehow distributed uniformly through the sample such that they were invisible.2

Others have claimed Dr Austin’s dacite sample gave an old age because it contained old feldspar crystals. They said that Dr Austin should have known they were old because the crystals were large and zoned. However, Dr Austin’s results (Table 1) show that the wrong ages were not confined to one particular mineral. The idea that the age of a mineral can be anticipated by its size or colour is incorrect. Dalrymple, for example, found that the wrong ages in his samples were unrelated to crystal size, or any other observable characteristic of the crystal.2

Another critic said that Dr Austin should only have dated the volcanic glass from his sample, because the glass would have solidified when the lava dome formed. However, Dalrymple found that even volcanic glass can give wrong ages and rationalized that it can be contaminated by argon from older rock material.