PEERing into the manufacturing of an anti-creationist urban myth

With astounding photos and expert analysis from geologists, theologians, historians, and others, Grand Canyon: A Different View provides a biblical perspective on this magnificent canyon.

Over the past three years, AiG had been tracking the efforts of anti-creationists in America who have been trying to ban a book from National Park Service bookstores.

Creationist Tom Vail’s Grand Canyon: A Different View has now become more than a book containing beautiful photographs of the Canyon’s grandeur with accompanying text (including contributions by AiG staff and others)—it’s become a national controversy. You see, Tom’s book explains that the Canyon’s formation came about by rapid processes associated with the Flood of Noah (rather than by slow erosion over millions of years, which is the standard story presented by park rangers); because of that, evolutionist book-banners set their sights on it. The book then became the focus of much controversy in 2004 (see “Deluged with Pro-Flood Email!”), and generated over 7,000 letters/emails to the National Park Service as well as coverage by CBS Evening News, NBC Nightly News, CNN, The New York Times, and many other media outlets. 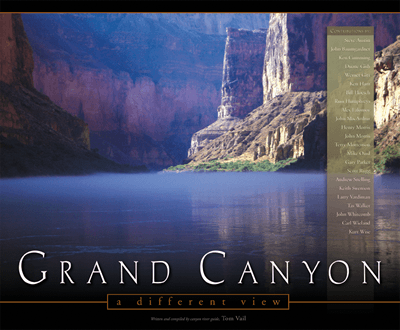 Whether gaping down the huge chasm from the rim, or navigating the Colorado River below, visitors to the Grand Canyon see a perspective that words can’t describe. In fact, perspective is the message of this wonderful story from nature. Visit this marvelous site yourself, through the photographs and essays in Grand Canyon: A Different View, and think about your own perspective.

In recent weeks, the controversy has re-surfaced. Here’s why: the Park Service has never announced a decision as to whether Mr. Vail’s book would remain in park bookstores, but it has remained popular at Canyon bookstores. Thus the censorship efforts have not succeeded and have actually boosted sales of the book. A frustrated activist group recently saber-rattled (again) when it issued a news release (December 28) about Grand Canyon: A Different View. It was yet another attempt by evolutionists in the environmentalist activist group PEER (Public Employees for Environmental Responsibility) to bring the book’s controversial contents to the public’s attention and force the National Park Service’s hand to make a determination of the book’s status.

In doing so, however, PEER received a largely negative reaction, of which the harshest rebuke came from what PEER would have normally called a friend: a leading evolutionist, who now feels duped by PEER and is extremely angry. This person is the publisher of Skeptic magazine, Michael Shermer, and a frequent critic of AiG. In this case, Shermer has done an admirable job of researching and exposing the false claims contained in the PEER news release, while at the same time admitting that he was taken in by accepting PEER’s claims uncritically.

So, what was stated in the PEER news release that was discovered to be so wrong? Shermer, in his Skeptic article entitled “Fact Checking 101,” has thankfully done the extensive research for us.

At the outset of his exposé of PEER’s claims, Shermer rebutted the very first sentence of the news release, in which it was stated: “Grand Canyon National Park is not permitted to give an official estimate of the geologic age of its principal feature, due to pressure from Bush administration appointees.” Later in the news release, PEER urged the new NPS director to remove the book and also to “allow park interpretive rangers to honestly answer questions from the public about the geologic age of the Grand Canyon.” (You can read the release on the PEER website—but please note that the release has been revised by PEER; yet, as this article is being posted, PEER has not mentioned a revision.)

A few days before posting his web article, Shermer had written about PEER’s claims and accepted them at face value. In his retraction, Shermer admitted that when he first reported on PEER’s accusation that pressure had supposedly been applied by the Bush administration to back off the Canyon’s “age” question, he had “accepted this claim by PEER without calling the National Park Service (NPS) or the Grand Canyon National Park (GCNP) to check it.”

Shermer’s first article, plus numerous websites and newspapers, quoted PEER’s executive director, Jeff Ruch, who declared that “to avoid offending religious fundamentalists, our National Park Service is under orders to suspend its belief in geology.” But those who inquired with federal park officials about the issue were told by these officials (at the NPS and GCNP) that PEER’s claims were absolutely false. Many of these people then contacted Shermer and informed him that alleged pressure from anyone in the Bush administration to shrink away from the standard long-age teaching of the Canyon’s formation was non-existent. In addition, some Canyon rangers themselves wrote Shermer and stated that PEER’s claims regarding Bush administration officials supposedly being sympathetic to creationists were absolutely wrong.

Shermer, confronted with all of this information, phoned Mr. Ruch to ask what evidence he had to support his claim of the Bush administration’s heavy-handedness. Shermer, now living up to his reputation of being one of America’s best-known skeptics, came away “convinced that he [Jeff Ruch] simply made up the claim out of whole cloth.” For example, according to Shermer, Ruch could not name one person in the Bush administration who had put any pressure on Park Service staff not to give an old age for the Canyon.

Meanwhile, PEER still has an online petition posted to its website for people to express their concern about these unsubstantiated claims, and which contains the bizarre claim: “The Bush administration is catering to right-wing fundamentalist groups by agreeing to censor videos, peddle creationist dogma and erect crosses and Biblical plaques in our national parks. Park scientists, curators and managers who object risk their careers.”

We want to point out that many AiG staff members visit the Grand Canyon every year (I was there in June myself). We can tell you that the museum exhibits, signs on trails/rim overlooks, museum videos, and ranger lectures all still tell the story (sadly) that the Canyon was formed slowly over millions of years. PEER has obviously been crying wolf, and even evolutionists have caught on to this.

Shermer’s opinion is that PEER is an “anti-religion liberal activist watchdog group in search of demons to exorcise and dragons to slay.” He then apologized to his readers for not fact-checking his first story before publishing it on his site. Now, let’s see if Pulitzer prize-winning cartoonist Gary Trudeau of Doonesbury fame will make his own retraction; Trudeau, a vehement critic of President Bush, used his January 13 strip (which contains objectionable language) to regurgitate the false claim by PEER and once again find opportunity to bash the president.

The book controversy started when the presidents of seven geological societies (representing tens of thousands of geologists and paleontologists) wrote a letter in 2003 to the superintendent of Grand Canyon National Park protesting the fact that Grand Canyon: A Different View was available for purchase in Canyon bookstores. The media picked up on the attempted book censorship, and the book’s controversy grew accordingly.

Tom Vail praises God for what happened: “This reminds me of the story in Genesis of Joseph being sold by his brothers. Years later when they met again, he told them, ‘As for you, you meant evil against me, but God meant it for good in order to bring about this present result …’ (Genesis 50:20). And the result of the controversy has been for the glory of the Lord’s Kingdom, for more people then ever are examining this issue.*”

There are two ironies to point out. First, evolution is itself a worldview built on its own beliefs regarding the origins of everything. In other words, Vail’s book is not the only “religious” book in Canyon bookstores. The other irony is that Vail, the book’s compiler, is a veteran guide at the Canyon (he even worked for the NPS for a few years), and he used to present the evolutionary explanation of how Grand Canyon supposedly formed. He eventually discovered, though, that the Genesis account of the Flood offered the better explanation of the Canyon’s creation (that after the Flood, a lot of water and a little bit of time carved it out—see Grand Canyon: Monument to the world-wide Flood).

Vail told us on Monday that “You have to ask yourself, ‘Why is it a debate at all? Why is this little book such a threat?’ I believe it is because the book attempts to shine some Light into this darkened world in which we live, light that comes in the form of Truth.”

AiG asks why the National Park Service shouldn’t give Canyon visitors the opportunity to consider an alternative, plausible interpretation for the Canyon’s formation. Please realize that no one is being forced to buy Tom Vail’s book. Yet evolutionary activists—dating back to 2003—still want to engage in book-banning and present only their view of the Canyon, to the exclusion of other views.

* Editor's Note: This paragraph includes the original quote Mr. Vail submitted to us — an editing error garbled what Mr. Vail intended to write. We apologize for the mistake.