The Clock in the Rock

The item shown in the photograph here is a striking example of the fact that rock can form quickly. 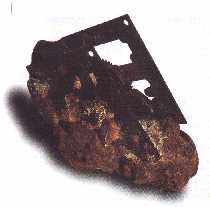 We have all been so thoroughly soaked in the 'long-age' thinking of our culture that most people assume that it invariably takes millions of years for sediments (like mud or sand) to harden into rock.

In reality, though, all it takes is an appropriate mix of ingredients – concrete is an obvious example.

The item shown in the photograph here is a striking example of the fact that rock can form quickly. It shows part of the mechanism of a man-made clock encased in solid rock, along with seashells. Obviously, the clock was not made millions of years ago!

This 'clock rock' was found in 1975 by Dolores Testerman, just a short way south of the South Jetty at Westport, Washington, USA. There have been many shipwrecks and boats sunk in the area. This will be just one of the many items which will be on display in the planned Answers in Genesis family museum in Northern Kentucky, proclaiming the trustworthiness of the Bible's account of history.