The photo below shows something that is startling to those who, conditioned by the dominant long-age belief of our culture, instinctively feel that such things must take many thousands, if not millions of years.

The specimen, sent by Mr John Heffner, is the cross-section of a metal pipe from a gas field. Inside the pipe, one can clearly see solid rock which has grown in rings from the outside inwards until it left only about a two cm (3/4") diameter opening. 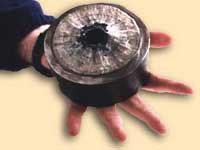 A cross-section of a gas field pipe. The metal of the pipe casing is clearly distinct from the layered rock which has formed inside it, and has drastically narrowed the flow area. Ordinary measures failed to clear the rock, which is hard and firmly adhering to the metal, so the whole pipe was removed.

It is a section of the flowline (a pipe at the surface) fed by the Sonat Minerals 16-1 natural gas well, in Lousiana, USA. The well was drilled into the Austin Chalk formation in January, 1997, then shut until all the new production facilities and piping at the surface were constructed. It started producing in March 1997.

The flow from the well, which then went through this pipe at the surface, consisted of natural gas, condensate and salt water from the host rock layer. This lasted for only three months before problems became apparent. In June, 1997, the well was shut and this flowline pipe was inspected. What they found was the massive amount of ‘scale’ that you see here, which had almost completely choked the flow. Attempts to remove this buildup with pressurized water and mechanical methods were unsuccessful, and therefore the flowline was replaced.

The deposit that has formed inside the pipe consists of completely hard and dense rock. Its appearance is similar to that of the laminated (layered) flowstone deposits, derived from dissolved limestone or chalk, which one finds in caves. A stalactite, for example, sometimes has concentric rings in cross-section. Such rock consists mostly of calcium carbonate (CaCO3), known as the mineral calcite.

Chemical analysis of the rock by the Petrolite Corporation of St Louis, Missouri, confirmed that it was around 84% calcium carbonate.1

Seeing such solid, layered rock forming in only three months shows that long time-spans are not necessary. It is just one of the many examples we have featured in Creation which defy various common long-age beliefs.