Fossil fern fronds fly in the face of beliefs held by the majority of the most highly educated people in the world.

Based on an article by Dr Joachim Scheven in Leben 3 of Kuratorium Lebendige Vorwelt, Germany.

The fossil fern fronds shown in Figure 1 can lead us to conclusions which are so straightforward that they are easily grasped by young children, yet they fly in the face of beliefs held by the majority of the most highly educated people in the world. The specimen is from the roof of a coal seam of the ‘Piesberg’, near Osnabrück in Germany.

Evolutionists and others committed to long-age belief systems insist that coal is the result of the gradual accumulation of plant material over long time periods. This is in direct opposition to the straightforward account in the Bible. From Genesis we learn of a recent creation, and a global Flood catastrophe which would have suddenly and rapidly buried huge quantities of vegetation, thus accounting for the great coal seams.

Fossil ferns such as these are often found in association with coal seams. Long-age believers routinely try to extrapolate present-day processes to explain the past. Therefore, according to them, such fossil ferns were not buried catastrophically, but were originally part of the litter of dead leaves from an ancient forest floor. However, the evidence is strongly opposed to this, as we shall see. 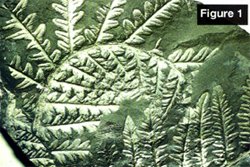 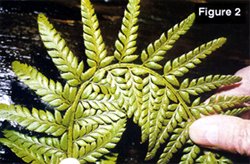 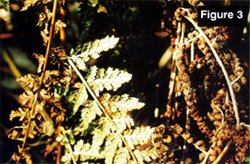 For a start, as any owner of a backyard compost heap knows, ferns which are buried will naturally turn back into soil; there is no sign anywhere on earth today of dead ferns on forest floors retaining their shape for thousands and millions of years. Fossil ferns such as those shown have therefore somehow bypassed the normal processes of decomposition. Instead, they have retained their shape and turned into mineral matter (in this case a clay mineral)—that is, ‘fossilized’.

More significantly, compare the fossil ferns shown in Figure 1 with those in your own experience which have recently died and dropped to the ground. As pictured in Figure 3, such ferns will have their pinnules (the leafy parts coming out on either side of the midrib) crumpled and rolled. This is quite unlike the fossil ferns in Figure 1. The biblical explanation for coal would predict that there would be both dead and living fern fronds (mostly the latter) buried suddenly. The fossil ferns in Figure 1 thus show all the evidence of having been fresh, living ferns which were buried suddenly, in a load of mineral-laden sediment, before their pinnules crumpled.

Finally, look at the main one of these fossil fern fronds in Figure 1, the one which is curved and bent over. Compare it to the photo of the living fern shown in Figure 2. Even a small child would be able to see that the living fern frond shown in this photo didn’t grow in that position; it has been bent over by force, and if it were let go, it would instantly straighten out. Even if one could not see the hands holding it, it would still be obvious that it is being restrained in an unnatural position. This is because the pinnules normally come out from the midline parallel to each other. Yet in this fern frond the upper ones diverge unnaturally away from each other, while the bottom ones do the opposite, to the extent of overlapping. Exactly the same thing is seen in the bent fossil fern frond.

The conclusion is obvious; this now-fossilized frond was buried and deformed into its unnatural curvature while living and fresh, supple enough to bend smoothly without breaking. It then remained permanently ‘pinned down’ by the weight of sediment, which prevented it from snapping back.

This is only one of the many evidence which clearly support massive catastrophism as the only viable explanation for the world’s huge coal deposits. (See also Floating Forests in Creation 18(1):20–24.) The near-universal acceptance of the ‘slow-and-gradual’ explanation seems hard to understand without the insight provided by the Apostle in 2 Peter 3.

Here Peter refers to those who would scoff at the promise of Christ’s Second Coming in judgment, preferring to have a philosophy which insists that natural processes just keep on happening as they always have (‘all things continue as they were from the beginning’). The basis of their scoffing, says the Word of God, is their ‘willing ignorance’ of two great facts, namely original divine creation, followed by global watery judgment. For those willing to accept that revelation is the real key to the past, there is overwhelming evidence in the rocks, such as provided by our example here, to show the reasonableness of that belief.