Life Requires a Source of Information

by Dr. Werner Gitt on May 14, 2009
Featured in In the Beginning Was Information
Share:
Email Using:
Gmail Yahoo! Outlook Other

The common factor present in all living organisms, from bacteria to man, is the information contained in all their cells. It has been discovered that nowhere else can a higher statistical packing density of information (see appendix A1.2.3) be found. The information present in living systems falls in the category of “operational information” as discussed in chapter 7. This information is exactly tuned in to the infinitude of life processes and situations, and its origin can be ascribed to creative constructional information (chapter 7). The different information aspects are depicted in Figure 26, where the statistical level has been omitted for the sake of simplicity. This diagram is of a general nature and can therefore be applied to any piece of information (see chapter 5 for domain of definition); it is in every case under consideration only necessary to identify the sender, the recipient, and the specifics of the various levels, syntax, semantics, pragmatics, and apobetics. The properties characteristic of life are indicated next to each level in Figure 26. In the case of the recipient, these levels can in principle be investigated scientifically, although we have to admit that our present knowledge only scratches the surface. 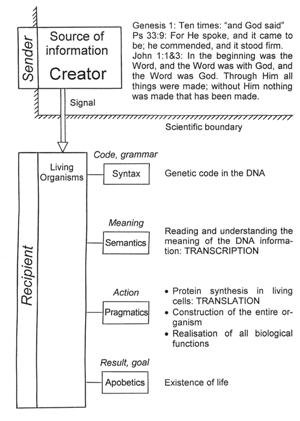 Figure 26: Concerning the origin of life. The biological information in living beings is obviously “operational information” which can be specified and investigated scientifically for the recipient on the known levels—syntax, semantics, pragmatics, and apobetics. Its origin and nature is “creative information.” Scientific analysis requires the existence of a sender, but we can only find Him in the revelation of the Bible.

According to the information laws, every piece of information requires a sender. The demarcated region in Figure 26 is in principle not accessible for scientific research, namely the person of the sender. Since the sender cannot be investigated by human means, many people erroneously conclude that He does not exist, and, thus, they contravene the information theorems. The requirement that there must be a personal sender exercising his own free will, cannot be relinquished. This sender, the Creator, has revealed himself so that we do have information about Him. He, Jesus, was in the world and the world was made through Him (John 1:10). Everything in the entire universe, without exception, was created by Him, as is stated in the first verses of John’s Gospel and in Colossians 1:16: “For by him all things were created: things in heaven and on earth, visible and invisible, whether thrones or powers or rulers or authorities; all things were created by him and for him.”

The close link between information and will was discussed in paragraph 3.3, and this idea is also clearly emphasized many times in the Bible. We read in Revelation 4:11, “You created all things, and by your will they were created and have their being.” The intentional prerequisite of information is expressed in Genesis 1:26: “Let us make man in our image, in our likeness.”

In the light of the information theorems, all materialistic evolution models are useless and are thus rejected.1

The British evolution theoreticist Richard Dawkins expresses the following expectation in his book The Blind Watchmaker: “The purpose of this book is to provide a non-supernatural explanation for the existence of complex living organisms” [D2]. As a consequence, we cannot expect to find a scientifically based answer in his discussion (e.g., because of Theorem 17).