What Makes Us Human?

Has “EnhancerFinder” unraveled the secret of human origins?

“Advances in DNA sequencing and supercomputing have given us the power to understand evolution at a level of detail that just a few years ago would have been impossible,” says Katherine Pollard of the University of California, San Francisco's (UCSF's) Institute for Human Genetics. “In this study, we found stretches of DNA that evolved much more quickly than others. We believe that these fast-evolving stretches were crucial to our human ancestors becoming distinct from our closest primate relatives.”

“It's been 10 years since the Human Genome Project was declared ‘complete,’” Pollard says, “but the amount of genomic knowledge we've gleaned since then—in large part due to advances in bioinformatics and supercomputing—have catapulted us far beyond what we thought we knew. I'm confident that as we continue to dive deep into important regions such as HARs [human accelerated regions], we'll come ever closer to answering the question: what makes us human?’”

Switching Onto The Fast-Track

Evolutionists consider humans more highly evolved than chimps. Pollard’s group attributes advanced human abilities to rapid—accelerated—mutations in the evolving human-to-be lineage after chimps and humans diverged from a common ape-like ancestor. They compared human and chimp genomes in search of such differences in regulatory genes,1 naming the 2,600 or so differences they identified human accelerated regions (HARs).

Once-upon-a-deep-time, the team hypothesized, many such HARs controlled how long certain genes switched on to enhance embryonic development, enabling those embryos to evolve into something more advanced than their forebears. The team designed EnhancerFinder to identify HARs that could make us human. Then they tested some HARs on animal embryos to see if they could direct development human-ward.

“EnhancerFinder is a machine-learning algorithm that takes in basic genetic information—a HAR sequence, known evolutionary patterns, other functional genomics data—and returns a prediction of that HAR’s function,” explains John Capra, lead author of the report published 11 November 2013 in Philosophical Transactions of the Royal Society B. “Using this approach, we predicted that nearly eight hundred HARs act as enhancers at a specific point during embryonic development. Confirming this prediction for several dozen HARs, our next goal was to see whether any of these HARs enhanced patterns of gene activation that were uniquely human.”

After testing some HARs on mouse embryos, the team believes EnhancerFinder has glimpsed “gains of function” that enabled ape-like ancestors to become human. For instance, the researchers compared the effects of the human and chimpanzee versions of 2xHAR.164 and 2xHAR.170 on embryonic mice. Only the human version “enhanced” the development of a portion of the brain that becomes the cerebellum.2 Therefore, the researchers believe that genes directing brain development in an ancestral embryo gained new functions when inactive forms of these HARs rapidly mutated into active forms.

“These results, while preliminary,” Capra says, “offer an unprecedented glimpse into how very recent changes to the human genome have modified the genetic programs that control embryonic development to potentially yield different results. We anticipate that if we were to look at the activity of HARs that are enhancers during later developmental stages, we would see even more differences between humans and chimpanzees.”

Testing the effect of a human gene sequence on a mouse embryo does not, however, demonstrate how mutations in ancestral animal embryos could unlock their genetic potential and cause them to evolve into humans. A laboratory mouse’s embryonic development can be altered by artificially providing it with new genetic instructions, but naturally occurring genetic “gain of function” of the type necessary for molecules-to-man evolution has never been observed. 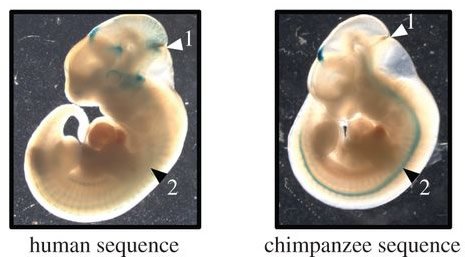 What makes us human? To examine the differences in how chimpanzee and human regulatory genes control embryonic development, some of those genetic distinctions were tested on developing mice. The influence of human and chimpanzee genetic regions called 2xHAR.164 and 2xHAR.170 on these mouse embryos differed. Only the human version of the genes was associated with mid- and hindbrain development. Image by J. Capra et al., via Philosophical Transactions of the Royal Society B.3

Molecular geneticist Dr. Georgia Purdom of Answers in Genesis explains why the study’s conclusions are flawed from their foundation:

The central problem with the research is the beginning assumption that humans and chimps share a common ancestor. The researchers compare human and chimp DNA. Where the sequences differ in the locations they have defined, they assume that the human DNA in these regions has mutated faster than the chimp DNA in the same area, since they believe humans are more evolved than chimps.

The researchers did not observe the DNA mutating. Rather, because they assume that humans are more evolved than chimps, they believe the DNA in the HARs must have evolved rapidly after humans and apes diverged.

“Thus,” Dr. Purdom explains, “they label these regions as ‘human accelerated regions’ or HARs.” But even naming these sections of the human genome “accelerated” or “enhanced” assumes that ape-like creatures on the evolutionary fast-track evolved into people.

Since no such information-increasing mutation of the type necessary for molecules-to-man evolution has ever been observed, how did these HARs originate? Dr. Purdom sheds light on these chimp-human distinctions:

From Scripture we know that humans and chimps are separate creations by God, so in reality the regions they label as HARs are very likely regions that God designed differently in chimps and humans. Humans and chimps do share a fair amount of genetic similarity (especially genes), which is to be expected, since on a biological level humans and chimps are both mammals. Thus it is no surprise that a lot of the differences seem to be in the control or regulatory regions of genes, which “HARs” may represent.

Common Designs And So Much More

Identifying genetic similarities and differences between humans and primate animals cannot reveal how those differences came to be.

EnhancerFinder’s programming was based not just on observable differences between the human and chimpanzee genomes but on so-called “known evolutionary patterns.” Yet those patterns have never been observed and are only assumed to have taken place. Programming a computer to agree with you does not prove you are right. In simple terms, the researchers simply “told” the computer that evolution “happened” and then asked the computer to “tell” them how. In reality, the computer at best identified common designs and chimp-human distinctives.

Elaborating on God’s creation of man in Genesis 2:7, God’s Word records, “And the Lord God formed man of the dust of the ground, and breathed into his nostrils the breath of life; and man became a living being.” From the time that God created Adam and Eve (Genesis 1:26–27) in His own image humans have had fully human physical bodies imbued with a unique spiritual nature.

God created Adam and Eve on the 6th day of Creation week about 6,000 years ago. The remarkable features unique to humans as well as those we share with other biological mammals are all of God’s creation and design. From the beginning, God designed humans in His image to be able to have fellowship with Him, something animals cannot do. Thus humans are supplied an abstract creative thinking capacity that enables us to think thoughts and use language and ask questions and make choices and understand the natures of God and man.

So, what makes us human? Our human genome is an essential part—though only part—of that answer. And where did the human genome—only now beginning to be understood since being mapping by the Human Genome Project—come from? The human genome was God’s “project,” spoken into existence when He created Adam’s physical body and endowed him with a spiritual nature, without any evolution at all.

God’s “project”—His plan for human beings—did not end when He created Adam and Eve. Soon after their creation, our first parents rebelled against God, wrecking their relationship with their Creator and incurring the just sentence of death, both spiritually and physically. All people since have sinned and fallen short of the glory of our holy and perfect God (Romans 3:23). God has nevertheless graciously supplied forgiveness, through the sacrificial death of His own Son Jesus Christ, so that human beings may be restored to fellowship with their Creator and have abundant and eternal life.

Previous Article Did Archaeopteryx Evolve Flight and Then Get Grounded? Next Article First Life on Earth