We’d like you to meet TNR—a chicken with no feathers. His feathers were not pulled out by someone anxious to have him for a meal—feathers simply don’t grow on him!

TNR (Totally Naked Rooster) is a mutant—which means a mistake in his genes or chromosomes has caused him to be featherless. 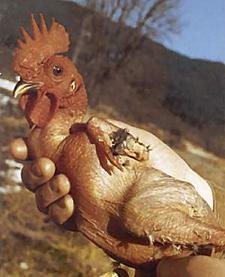 Velma Nile from Mount Shasta in California said that TNR spent nine months as the centre of attention in a biology class. ‘His major problems were that he needed to be in a warm place, he got sunburned, and mosquitoes would bite him’, Velma said. ‘But an even greater problem was that he was unable to mate because of his lack of feathers to flap his wings.’

Evolutionists believe that mutations—genetic mistakes—have contributed to the development of creatures into what they are today. But as in TNR’s case, almost every mutation known has caused either harm or no improvement. Mutations cause a loss of information, not evolutionary improvement. Take it from TNR!