Did Speedy Horses Evolve Only Recently? 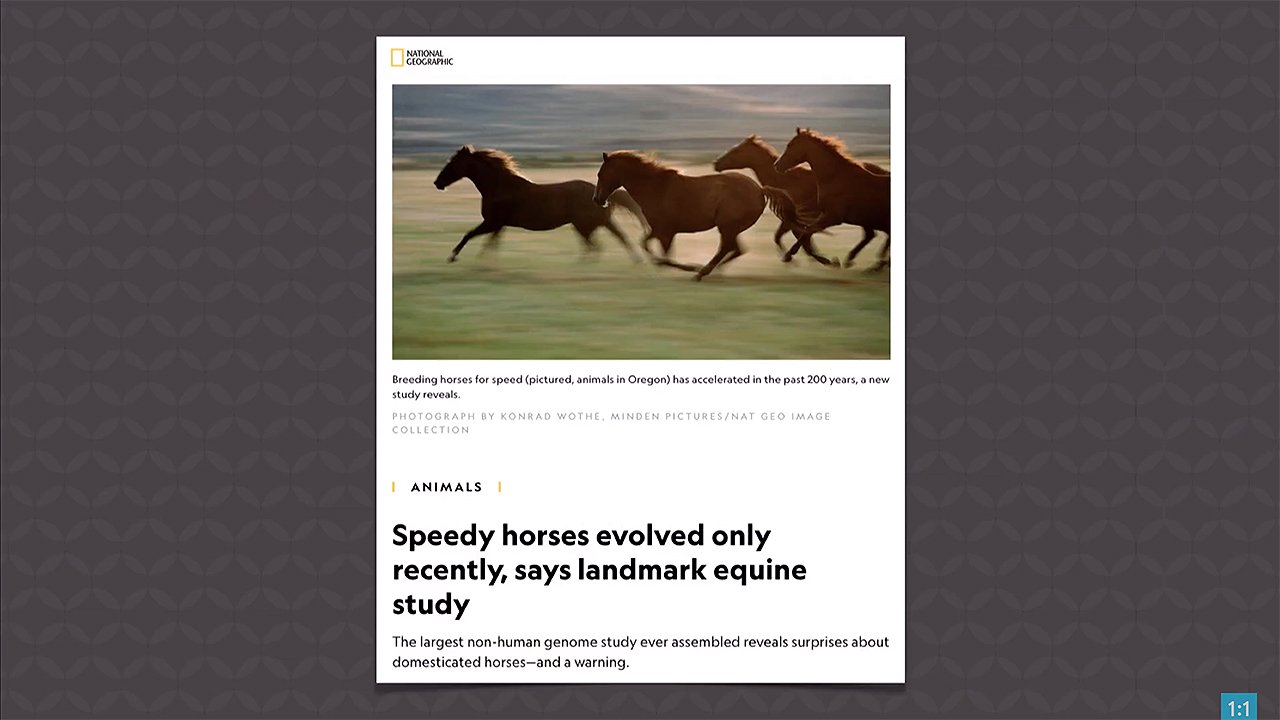 A new study, summarized in a lengthy National Geographic article, looked at the genome of over 200 fossil horses, as well as domesticated horses and the Przewalski’s horse, a rare wild horse in Mongolia. The National Geographic headline declared, “Speedy horses evolved only recently, says landmark equine study.” But what they were really looking at was not evolution—it was artificial selection!

The study compared genetic diversity between fossil horses and living ones, including our domesticated varieties (of which there are around 600, all belonging to the same species). And what they found was that genetic diversity is at “an all-time low” due to artificial selection.

Artificial selection occurs when humans breed for certain traits (such as speed, one of the traits selected for within the past 200 years, according to these researchers). In doing so, the breeder eliminates much of the variety within the genome (that’s created in the original kind). This results in low genetic diversity. To emphasize how low this diversity is, the article points out that nearly all male thoroughbreds (like those who raced at the Kentucky Derby just a little over a week ago) can trace their ancestry back to one stallion born in the year 1700.

The horses have lost genetic diversity—they haven’t gained any brand-new information, as required by evolution.

This is not evolution! The horses have lost genetic diversity—they haven’t gained any brand-new information, as required by evolution. A loss is not evolution—it’s the opposite. Molecules-to-man evolution requires a process to add new genetic information for new structures and functions to the genome, which we have never observed! And to claim that humans breeding horses for specific characteristics is evolution is ridiculous. Humans are simply eliminating existing variety within the genome and selecting for certain traits that some animals already have—and that’s not evolution! These horses may be faster than their ancestors (because of already existent genetic diversity), but they are worse off overall for it!

Horses didn’t evolve. The horse kind was created by God with rich genetic diversity. Over time, humans have artificially selected for certain traits, reducing this variety and giving us our 600 breeds of domestic horses.

*“Pure,” in this case, does not mean perfect, but having little genetic diversity and a concentration of undesirable mutations due to the fall (Genesis 3) made more prominent by reckless breeding.

This item was discussed today on Answers News with cohosts Dr. Georgia Purdom, Bodie Hodge, and Avery Foley. Answers News is our twice-weekly news program filmed live before a studio audience here at the Creation Museum and broadcast on my Facebook page and the Answers in Genesis Facebook page. We also covered the following topics: