Tourists who visit Cape Leeuwin in Western Australia are astonished at the sight of this waterwheel which has become entombed in solid rock in less than 65 years.

But why should it be surprising that the precipitation of minerals from flowing water can do this sort of thing in what is actually a fairly long period of time, with water dripping night and day?

The reason most see these sorts of facts as extraordinary is because of our cultural conditioning in an evolutionary world view which is hostile to the Bible’s clear teaching of a recent creation. This makes people instinctively think of geological events such as petrifaction, fossilization and flowstone formation, for instance, in terms of many millions of years.

Given the right chemical environment, the thousands of years since Noah’s Flood are actually a vast amount of time adequate to explain the sorts of geological features we have grown up to believe speak of millions of years. 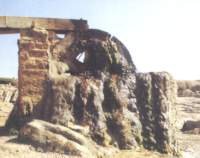 Close-ups of the waterwheel show remarkable concretions have formed in little more than 60 years. Natural formations whose ages are not know may lead some to believe they have taken thousands or even millions of years to form. Evolutionary indoctrination has left most people with a false idea of the what 'old' really is in the natural world.