Ancient “Fossil Reefs”—Formed in the Flood?

Exposed in various rock layers are large structures that look very much like ocean reefs preserved in stone. How did these thick reefs grow in place, if all the layers around them were deposited during the year-long Flood?

Scientists have found hundreds of fossil-filled geologic formations, which evolutionary researchers claim are ancient “reefs” slowly built by undersea creatures over thousands of years.1 Their existence appears to be difficult to reconcile with the belief that such limestone deposits formed rapidly during the year-long Genesis Flood.

The differences between these “ancient” deposits and today’s ocean reefs, however, should alert us that something suspicious is going on. Modern reefs, such as the Great Barrier Reef off the coast of Australia, are vast cemented accumulations of skeletal remains left by seafloor animals, primarily corals, which grew over time on the remnants and debris of their predecessors. This slow buildup has resulted in huge features, known as “framework structures,” that are fairly sturdy and wave-resistant.

Ancient fossil “reefs” are not coral framework structures that we are familiar with today.

In contrast, “fossil reefs” are usually very small and have different kinds of organisms when compared to present-day living reefs (with notable exceptions). Framework coral reefs may not have existed in the pre-Flood world. Instead, the ocean floor probably had other types of structures, such as stromatolite reefs, brachiopod (lampshell) reefs, and sponge reefs, which were smaller and thinner than coral reefs. During the Flood, many of these reefs appear to have been ripped up by water and deposited rapidly in new locations. So what are called fossil “reefs” in the scientific literature are not coral framework structures that we are familiar with today.

Limestones (the same ingredient as in modern reefs) are abundant in the fossil record, but the corals within them are not organized into reefs. Consider some better-known examples. Prominent in Grand Canyon is the Redwall Limestone. When examined closely, it does not contain any organically bound, reef-like structures.2 Instead, this limestone is made of the jumbled broken debris of numerous corals, clams, sea lilies (crinoids), and other fossils. One 7-foot-thick (2 m) bed within it has been recognized as having been deposited catastrophically by swiftly flowing water choked with sediment, killing and burying en masse billions of large straight-shelled nautiloids.3 Such conditions are consistent with the Genesis Flood.

Capitan Reef in the Southwestern U.S.

One famous example of a claimed “fossil reef” is in the Guadalupe Mountains of southeastern New Mexico and western Texas.4 It’s commonly referred to as the Capitan Reef. However, careful field research has cast doubt on the claims that this was once a reef.5 The sloping deposits that should flank behind and in front of a true reef were not deposited at the same time as the claimed “reef.” Furthermore, the Capitan Limestone lacks large, organically-bound reef “frameworks” buried in place, or even smaller chunks from an organic framework as it was broken up and redeposited.

Instead, the Capitan Limestone is composed primarily of broken fossil fragments in a fine-grained mixture of lime silt and sand. The organisms that normally form reef frameworks are either absent or uncommon. The fine-grained mixture and broken fossils suggest that the material was deposited very rapidly, consistent with deposition during the Genesis Flood. Some investigators “have expressed frustration at using modern reefs to interpret their ancient counterparts, including this Capitan Reef.”6

Many fossil-bearing limestone deposits that once were interpreted as “fossil reefs” have been reinterpreted as debris flows (thick slurries of broken rock and sediments mixed with water resulting from underwater landslides) or other geologic structures that resulted from erosion, not creatures living on reefs. A well-known example is the so-called Nubrigyn Reef complex in eastern Australia.7

Instead of being formed by corals, the pieces of this so-called reef were built by algae. Indeed, careful examination reveals that the so-called reef is, in fact, made up of a mixture of pieces of broken fossil algae and non-reef-like types of rocks, literally “floating” in fine-grained sediments. For this reason, this feature is no longer regarded as a “fossil reef” but as a massive chunk of rock (a megabreccia) resulting from a debris flow.8 It represents the remains of a former reef that grew elsewhere but was destroyed in a watery catastrophe.

Similar doubts can be raised about the claimed reef complexes of the Canning Basin in the northwest of Western Australia.9 These consist of isolated fossil-bearing limestone features that rise high above the surrounding landscape. The platforms are flanked by steep limestone slopes that are claimed to have once been the flanks of the reefs.

The problem is that the sloping flanks were deposited by debris flows. Landslides appear to have picked up and transported broken blocks of the “reef” limestone. Apart from containing a wider variety of fossils, the slopes are no different from the rest of the limestone platforms. These platforms could instead be regarded as remnants of a continuous limestone bed that was eroded. Thus, any comparison with living reefs is only superficial.

Many other “fossil reefs” have now been reinterpreted as being the result of rapidly accumulating debris flows.10 Even the classic fossil Steinplatte Reef of the Austrian Alps has been described as a “sand pile.”11 A standard textbook on sedimentary rocks admits: “Closer inspection of many of these ancient carbonate ‘reefs’ reveals that they are composed largely of carbonate mud with the larger skeletal particles ‘floating’ within the mud matrix. Conclusive evidence for a rigid organic framework does not exist in most of the ancient carbonate mounds. In this sense, they are remarkably different from modern, coral-algal reefs.”12

If you find piles of skeletal particles “floating” in lime mud, the most reasonable conclusion is that they were deposited rapidly. This aptly describes the claimed fossil reefs within the Judea Group limestones of Israel’s Mount Carmel region (Figure 1).13 At the centers of the claimed reefs are jumbled masses of clams, with shells shaped like horn corals, “floating” in a mixture of fine biological debris. These aren’t even corals! 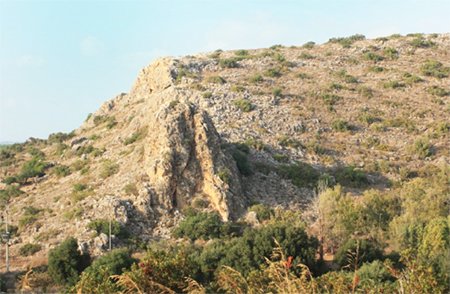 Figure 1: This “fossil reef” is found in the Judea Group limestone of Israel’s Mount Carmel area. Secular geologists claim this is an ancient reef buried in place. Diagrams typically show a central “core” filled with shells that look like horn corals, flanked to the left by a sloping “forereef” (the seaward side of a reef) and to the right by a flat backreef (the shallow “lagoon” side of a reef).

Figures 1a and 1b: If you look at the actual rocks, however, this is not a reef structure at all but debris that washed in. The supposed “core” consists of a jumbled mass of clams (shaped like horn corals) “floating” in a matrix of fine biological debris (Figure 1a, left). The supposed “backreef” consists of other mollusks buried haphazardly in a jumbled mass (Figure 1b, right).

These misidentified “fossil reefs” thus are reefs that grew before the Flood but were eroded, fragmented, and carried by debris flows. These fragments were then deposited as large chunks of rock mixed with finer sediment debris (megabreccias) or are simply piles of broken shells and other body fragments that were later cemented together by lime muds. In other cases, former reefs have been transported and buried elsewhere en masse. Therefore, no long time periods were required for any reefs to grow in place during the short span of the Flood.

The stromatolite, brachiopod, sponge, and other reefs that grew in the shallow oceans of the pre-Flood world were very different from today’s framework coral reefs, and many were much smaller. Then as a result of the upheaval of the Flood they would have been destroyed, and the debris transported and deposited in sediments. Interestingly, some entire pre-Flood reefs may also have been buried whole in place by Flood sediments.

Admittedly, some ancient “fossil reefs” do not, on first glance, look to be the result of rapid sediment transport. But their identification as structures that grew in place is usually questionable. Indeed, the effort to understand how both living and fossilized reefs form requires numerous conjectures (see “Modern Reefs,” p. 72). Thus, the need for “more time” to form supposed fossil reefs—and limestone deposits generally—is no serious challenge to a recent creation or the global cataclysmic Flood.14

In light of the previous examples the great need is for further careful investigations of these supposed “fossil reefs,” especially by creationists who think with a biblical worldview rather than a secular, naturalistic worldview.

Dr. Andrew Snelling holds a PhD in geology from the University of Sydney and has worked as a consultant research geologist in both Australia and America. Author of numerous scientific articles, Dr. Snelling is now director of research at Answers in Genesis.
Previous Article Bringing Lucy to Life Next Article Get Answers