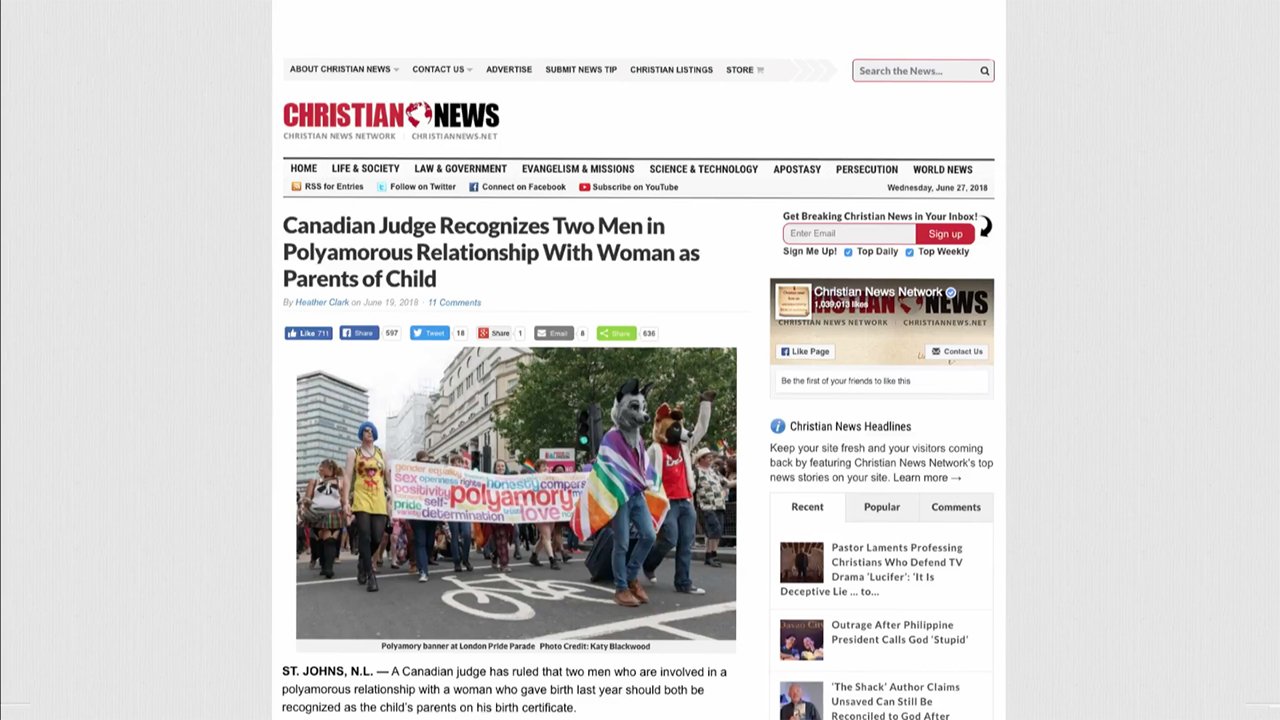 Canada has just recognized two men and one woman as the parents of one child on the child’s birth certificate. The two men and one woman in the province of Newfoundland and Labrador are all involved in what’s known as a “polyamorous” (meaning “many loves”) relationship. They are not legally married (polygamy is still illegal in Canada), but are all in a relationship together and believe they are all the parents of this child. Why this radical redefinition of parenthood?

The judge who decided this case wrote,

Society is continuously changing and family structures are changing along with it. .  .  . This must be recognized as a reality and not as a detriment to the best interests of the child [emphasis added].

The article reporting on this case goes on to say, regarding further statements from the judge,

He said that it would not be in the child’s best interests to deny parental recognition to both men, stating that when lawmakers passed the Children’s Law Act of 1997, which only allows two parents to be named on a birth certificate, they didn’t take into consideration the “now complex family relationships that are common and accepted in our society.”

His decision was based entirely on the ever-changing views of our culture. But as I wrote on Facebook and was quoted in the article from the Christian News reporting on this story, this view is really just social Darwinism in action. It’s a belief that culture is the ultimate authority and that whatever is accepted by the culture goes. Basically, our culture is like what is described in Judges 21:25: “everyone did what was right in his own eyes.” But the Bible has not changed! And God’s definition of the only true marriage (Genesis 1:27, 2:24) and thus the meaning of a family have not changed.

You see, if naturalistic evolution is your starting point, there is no ultimate authority, so ultimately anything goes. The result is the moral relativism we now see permeating our culture—a society clearly in rebellion against God.

Contrary to what this judge believes, I would say that his decision is a detriment to the child, because there’s only one definition of a true family and this polyamorous relationship falls far outside God’s design. God created the institutions of marriage and family with one man and one woman (Genesis 1:27, 2:24), so he gets to define them.

Looking out for the “best interests of the child” is teaching the child the truth that God created them, they're made in God’s image and very special, and they have a sin nature but God provides a free gift of salvation through his son Jesus who died and rose from the dead.

I discussed this item on Answers News today with regular cohost Dr. Georgia Purdom and guest Bryan Osborne, AiG’s curriculum specialist. Answers News is our twice-weekly news program filmed live before a studio audience here at the Creation Museum and broadcast on my Facebook page and the Answers in Genesis Facebook page. We also discussed the following intriguing topics: