The Impact of Dinosaur Extinction

A 41-member science panel has arrived at a verdict: an asteroid impact killed off the dinosaurs about 65 million years ago. The smoking gun is an impact crater measuring over 110 miles (177 km) in diameter inside Mexico's Yucatan Peninsula. This impact has long been cited as the leading suspect in the death of the dinosaurs. 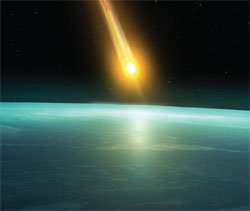 As the story goes, the impact blasted debris into the atmosphere, blocking the sun and resulting in a “global winter.” The specially selected international panel published their report in Science.*

Creationists argue that a different catastrophe is the best explanation for the death of most dinosaurs: Noah’s Flood about 4,300 years ago. (Most creationists, though, do not discount asteroid impacts during the Flood.) We know from Scripture that every “kind” of land animal was saved on Noah’s Ark (Genesis 6:19–20), and this would have included dinosaurs. After the Ark came to rest, the dinosaurs were reintroduced to a drastically changed world and died off in the years after the Flood.

Dinosaurs definitely roamed the earth in the past few thousand years, and this may explain many of the drawings and stories we find among post-Flood people groups (for example, see “The Dragons of Peru” on page 36 of this issue).

Previous Article Get a Life Next Article American Taliban?