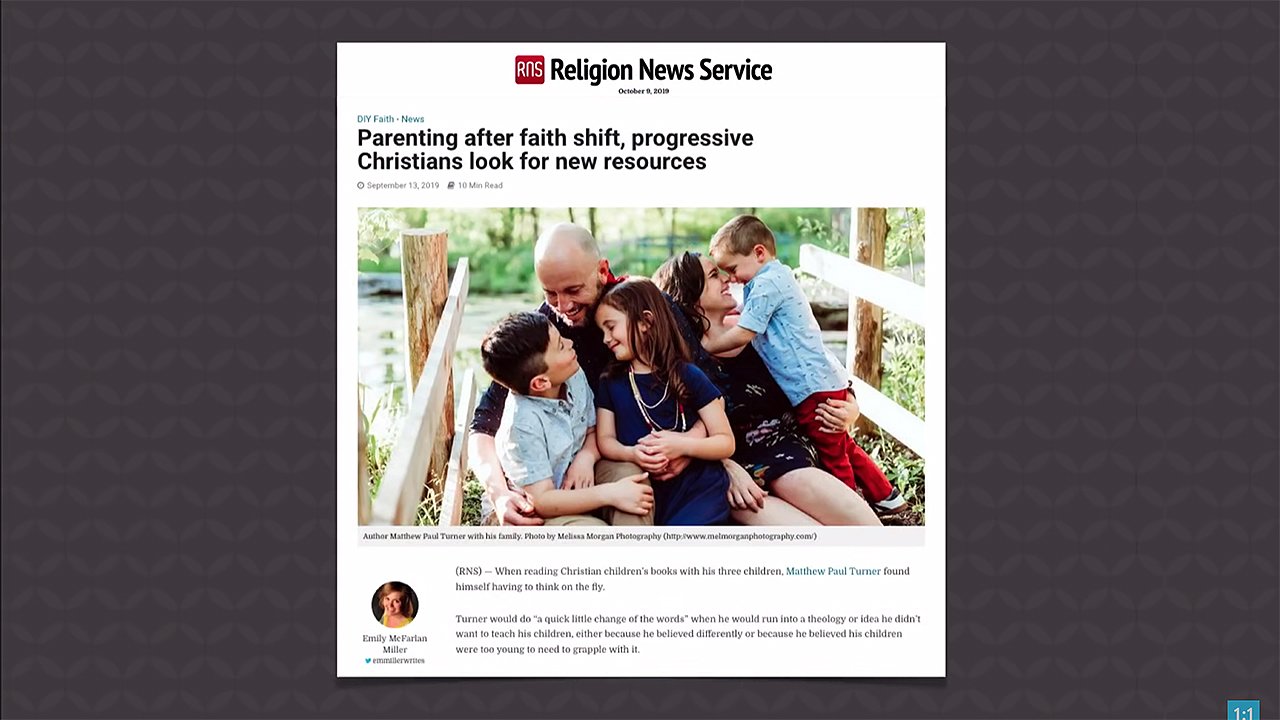 What’s on your child’s bookshelf? The books we read to our children can have a huge impact in shaping their views, beliefs, and theology. And for so-called “progressive Christians,” this can be a problem because many children’s books written by Christians are, as they put it, “skewed conservative” (in other words, biblical)—and they don’t want to read them to their children. So they are writing their own, as an article in Religion News Service states, in which several children’s authors were interviewed.

But I want to focus on statements made by just one of these authors. “Progressive Christian” and author Matthew Paul Turner shares that he often had to change the wording in Christian children’s book because he either didn’t believe what the book was teaching or didn’t think his children were old enough to grapple with the concept yet. This caused him to write his own children’s books. It’s clear from the interview that he doesn’t share with his children concepts like sin (which means he cannot explain the gospel to them either!). Turner makes this statement,

I was told how much I was a sinner or how terrible I was or how much I needed Jesus to die for my sins long before I realized and understood the concept that God created me, he adored me, (he) made me with purpose.

When someone rejects a literal Genesis, it affects the way they view the rest of the Bible and the Christian message, as can be seen with this author.

Now, Turner doesn’t believe Genesis is history (he mentions the big bang much later in the article and says his newest children’s book will “offer a different picture of creation”), so his concept of God creating him may very well include evolutionary processes, undermining the biblical doctrine of sin and death being a result of Adam’s fall. Really, when someone rejects a literal Genesis, it affects the way they view the rest of the Bible and the Christian message, as can be seen with this author.

Turner’s statement actually reveals a point I’ve made for years—Christian teaching needs to start with Genesis! You see, Turner says that he learned about sin and Jesus dying for his sins before he realized that God created him. But it doesn’t make sense to start with sin and Jesus—we need to start with the fact that God created everything perfect, and this perfect creation was then marred by sin. This is the only way the gospel makes sense. You need the foundation of the history in Genesis in order to fully understand the gospel!

So, while I certainly don’t agree with nearly everything reported in the article, I think Turner makes an important point without meaning to—we must teach our children, starting in Genesis. Teach them that they are fearfully and wonderfully made in the very image of God. Teach them about God’s original “very good” creation. Instruct them that mankind’s sin broke God’s creation and brought death and suffering into it. Teach them that we needed someone to pay the penalty for our sin, and that’s why Jesus stepped into history as the God-man, lived the perfect life we could never live, died in our place, rose again, and now offers the free gift of eternal life to all who will put their faith and trust in him.

Once we abandon the Bible as absolute truth, anything goes, and anyone can just make God and his gospel message in their own image.

We’re commanded to teach God’s Word to our children (Deuteronomy 6:7). These “progressive Christians” (who are largely secularized in their thinking) ignore God’s Word and come up with their own ideas about God, values, and a gospel that is different from the gospel given to us in God’s Word. (Really, it’s a gospel of social justice, which is no real gospel at all.) Once we abandon the Bible as absolute truth, anything goes, and anyone can just make God and his gospel message in their own image. But that gospel won’t save—only the biblical gospel, which is the power of God unto salvation (Romans 1:16).

This item was discussed Monday on Answers News with cohosts Dr. Georgia Purdom and Dr. Gabriela Haynes and frequent guest Roger Patterson. Answers News is our weekly news program filmed live before a studio audience here at the Creation Museum and broadcast on my Facebook page and the Answers in Genesis Facebook page. We also covered the following topics:

Watch the entire episode of Answers News for October 14, 2019.