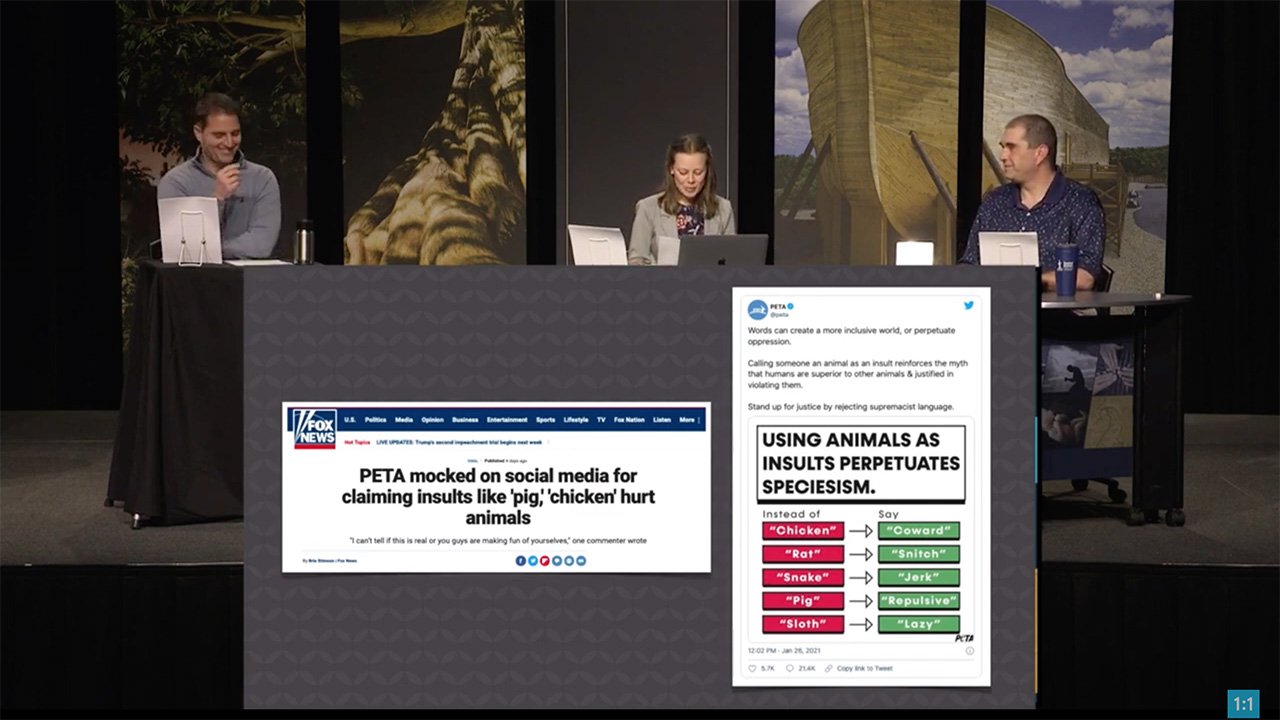 Is insulting someone by calling them a “pig,” “sloth,” or “chicken” actually insulting animals? Well, PETA (People for the Ethical Treatment of Animals) seems to think so! In a recent tweet, they shared an infographic with alternative words to common animal-based insults such as snake (try “jerk” instead), rat (“snitch”), or pig (“repulsive”). They ask that people use these alternatives because “using animals as insults perpetrates speciesism.”

In the explanation that accompanied the infographic, PETA explains:

Words can create a more inclusive world, or perpetuate oppression. Calling someone an animal as an insult reinforces the myth that humans are superior to other animals & justified in violating them. Stand up for justice by rejecting supremacist language.

This isn’t the first time they’ve suggested this—in 2018 they encouraged people to “bring home the bagels,” instead of “the bacon,” to stop “anti-animal” language.

The evolutionary underpinnings and biases of this organization are immediately obvious from the language used in their “animal insults” tweet.

The evolutionary underpinnings and biases of this organization are immediately obvious from the language used in their “animal insults” tweet. They believe humans are just “other animals,” no different from a snake, pig, or chicken (they even argue that to believe we are superior to these other creatures is “supremacist” thinking!). This comes from the naturalistic evolutionary worldview that we’re just animals with no more inherent value than a rat. After all, we all just got here by random, chance processes—and all life is supposedly related!

Of course, if you examine their worldview closely, it falls apart. In an evolutionary worldview, why care about “other animals”? After all, blue whales aren’t concerned about the plankton population, lions don’t mind taking down a weak gazelle, and bald eagles don’t compassionately care for trout. If we’re just animals, why care about the environment or “other animals” at all? It’s just survival of the fittest out there! And besides, from an evolutionary perspective, humans are related to plants, too, so we should stop eating plants and mowing the grass, as we’d be abusing and harming our relatives? It’s all such nonsense, filled with inconsistencies.

That doesn’t mean we lord that over creation, wantonly destroying the environment or driving species to extinction. Quite the opposite!

Now, we should take everything other people say and hold it up to the light of Scripture. And when we do, we see that PETA’s worldview is utterly opposed to God’s Word. We are not “other animals”—humans are distinct and different. We’re made in the very image of God (Genesis 1:27) and given dominion and stewardship over creation, to use it for our good and God’s glory (Genesis 1:28)—so, yes, we are “superior” to the animals! That doesn’t mean we lord that over creation, wantonly destroying the environment or driving species to extinction. Quite the opposite! We use the intellect, moral conscience, and creativity (part of what makes us uniquely human and “superior”) to kindly rule over God’s creation and honor Him.

But we live in a fallen world, broken by sin, so we don’t always exercise dominion properly. Some rule harshly or greedily, giving no heed to the damage (short or long-term) that their actions are causing. Others refuse to rule, allowing creation to have dominion over them as they worship “mother earth” and view humans as a blight on this planet. Both views are wrong—it’s the biblical worldview based on God’s Word starting in Genesis that is the correct balance between these extremes.

You can learn more about what biblical dominion and stewardship means in A Different Shade of Green by biologist Dr. Gordon Wilson.

And, by the way, in an evolutionary worldview, there’s no moral authority by which to say insulting people (by using animal insults or otherwise) is even wrong—why be kind with your words in that worldview? But in the biblical worldview, every person is made in God’s image and we’re to understand the power of our words and speaking kindly and gently to others:

Let no corrupting talk come out of your mouths, but only such as is good for building up, as fits the occasion, that it may give grace to those who hear. (Ephesians 4:29)

but no human being can tame the tongue. It is a restless evil, full of deadly poison. With it we bless our Lord and Father, and with it we curse people who are made in the likeness of God. From the same mouth come blessing and cursing. My brothers, these things ought not to be so. (James 3:8–10)

This item was discussed today Answers News with cohosts Bryan Osborne, Avery Foley, and Roger Patterson. Answers News is our twice-weekly news program filmed here at the Creation Museum and broadcast on my Facebook page and the Answers in Genesis Facebook page. We also covered the following topics:

Watch the entire episode of Answers News for February 8, 2021.