Photo by Charles Deluvio, via Unsplash. 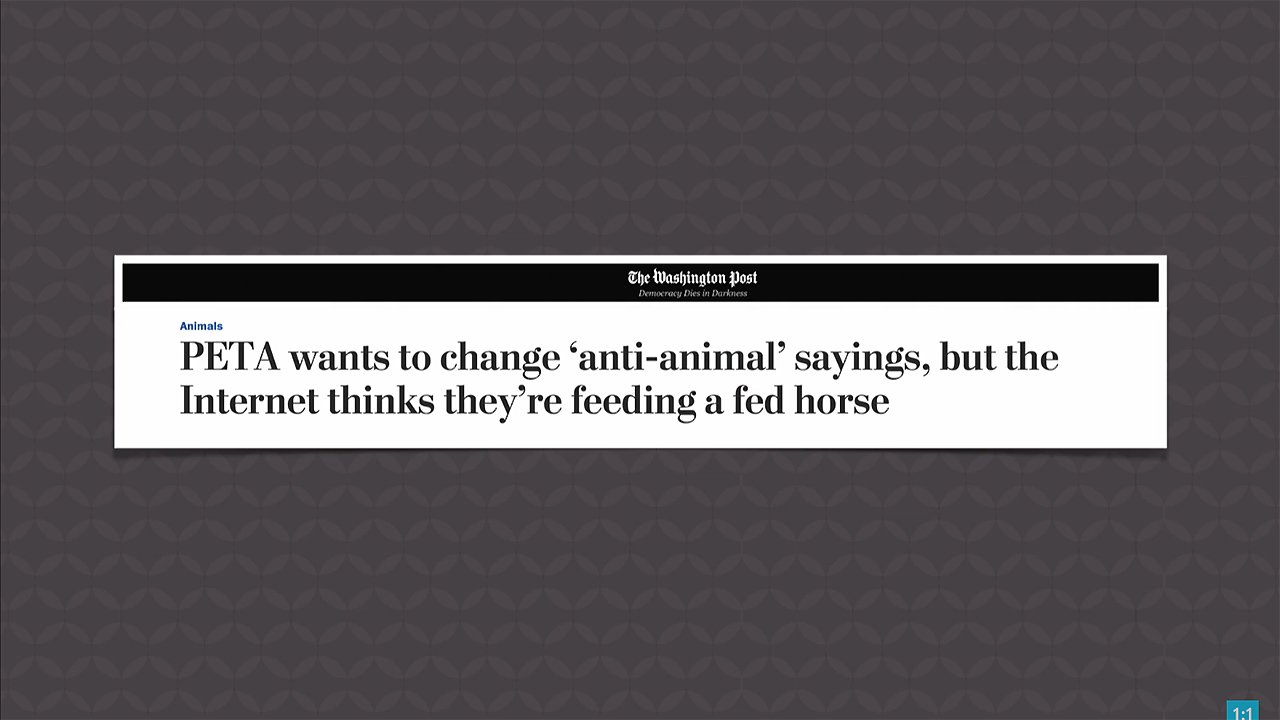 Instead of saying, “beat a dead horse,” animal activist group PETA wants you to say, “feed a fed horse.” They also want to change “kill two birds with one stone” to “feed two birds with one scone,” “take a bull by its horns” to become “take a flower by its thorns,” and “bring home the bacon” to see the salty pork product exchanged for bagels. Why? To “remove speciesism” from daily conversation.

Their tweet declared that these common sayings are “anti-animal language” that we should stop using. Along with an image of the offending sayings, and their suggested replacements, they tweeted,

Words matter, and as our understanding of social justice evolves, our language evolves along with it. Here’s how to remove speciesism from your daily conversations.

Now, here’s what I tweeted in response to PETA,

Evolutionists believe plants, animals, and humans are all relatives. In a shocking turn of events, PETA's making racist statements about our plant relatives and insists we eat them instead of our animal relatives.

You see, PETA’s ridiculous statements come from their evolutionary worldview. They believe we’re related to the animals so they don’t want anyone killing any of our “relatives,” other species (of course, you don’t see them campaigning to save E. coli or mosquitos!). But in their view we’re also related to soy beans, fig trees, and daffodils. In my "debate” at the Ark Encounter with Bill Nye, he said we’re all related to bananas. (Remember that the next time you’re eating a banana.) So why do they urge people to avoid “anti-animal” language regarding animals and not plants, considering they believe we’re related to both?

The evolutionary worldview is inconsistent. As Christians, we have a worldview that explains why we eat both plants and animals. Originally, we were created to eat plants (Genesis 1:29) but, after the flood, God gave us permission to eat everything (Genesis 9:3). In a fallen world, the sad reality is that there is death, and animals can now be part of our diet because our Creator has given us permission to eat animals. And, we do have the responsibility not to cause undue suffering to animals in our care, whether they be pets or food stock. This is fully consistent with a biblical worldview as stewards of God’s creation having both dominion (Genesis 1:28) and compassion (Deuteronomy 25:4).

And the truth is that, by far, the majority of teachers present evolution as fact to their public school students. Science textbooks used in these schools promote evolution as fact. Most teachers who reject evolution are afraid to even mention any of this, as they’re fearful they’ll be fired because of bullies like AU, FFRF, etc. AU is fearful that even one teacher somewhere might teach kids the truth about evolution—that it’s a belief not confirmed by observational science.

So, grab that bull by its horns and enjoy a delicious steak if you desire (Genesis 9:3). And as we would say in Australia: “Starve the Lizards and Stone the Crows!”

I’m thinking of suggesting to PETA that it start a “Save the Tapeworm” program!

I discussed this item today on Answers News with regular cohosts Dr. Georgia Purdom, and Bodie Hodge, Answers News is our twice-weekly news program filmed live before a studio audience here at the Creation Museum and broadcast on my Facebook page and the Answers in Genesis Facebook page. We also discussed the following topics:

Watch the entire episode of Answers News for December 13, 2018.