Image by Sam Balye, via Unsplash. 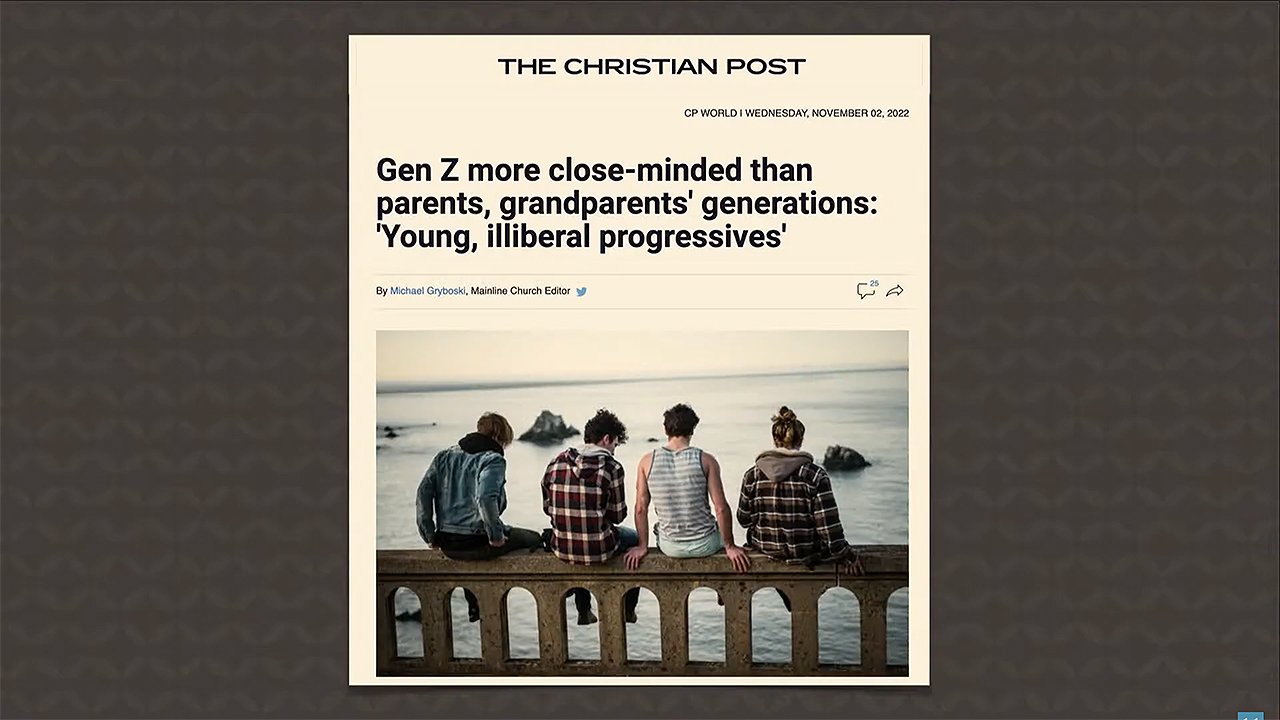 Western culture generally prides itself on being open-minded and tolerant of everyone and everything—but do they live up to their own ideals? Not according to a new study out of Great Britain. This study found that Gen Z (today’s 13–24-year-olds) “is less open-minded and more intolerant than older generations.”

According to the report, “[a] quarter of Gen Z say they ‘have very little tolerance for people with beliefs that they disagree with.’ They don’t believe in unrestrained free speech, with nearly half agreeing that ‘some people deserve to be canceled.’”

According to an executive of the group that conducted the research,

These are progressive people in that they support the freedoms won by earlier generations who changed social attitudes toward issues such as sexuality and equality. Indeed, they are significantly more progressive than their parents and even than millennials on some issues .  .  .

But, and it is a big but, young people could be said to be less liberal because they are less tolerant of the views of others than their parents and grandparents — surely a novelty.

This is actually not surprising! Over the past few years, we’ve seen massive (and often violent) protests on college campuses over speakers the students don’t like (I was even “canceled” by the University of Central Oklahoma before being reinstated), pro-life centers being vandalized and firebombed after Roe v. Wade was overturned, and even protesters playing “soccer” with Bibles before throwing them into portable toilets.

Why? Why are so many of today’s young people so militant against those with whom they disagree morally or politically? Because, as I’ve said so many times before, there’s no neutrality! Everyone has a worldview or religion! As the Bible states, people are either for Christ or against.

Those who are “progressive” and “liberal” don’t want equal space for all ideas because they aren’t seeking neutrality. They have a religion (humanism) and want to impose it on others—and Christianity stands in their way. The truth claims of Christianity fly in the face of their religious beliefs of relative morality, sexual “freedom” (really slavery), and “anything goes.”

It’s all part of the spiritual battle we’re in as people who hate God and therefore hate his people (John 15:18) and his Word, loving their darkness instead (John 3:19), suppress the truth in unrighteousness (Romans 1:18). How can we stand firm and fight in the battle that seems to be heating up every day? By putting on God’s armor.

Finally, be strong in the Lord and in the strength of his might. Put on the whole armor of God, that you may be able to stand against the schemes of the devil. For we do not wrestle against flesh and blood, but against the rulers, against the authorities, against the cosmic powers over this present darkness, against the spiritual forces of evil in the heavenly places. Therefore take up the whole armor of God, that you may be able to withstand in the evil day, and having done all, to stand firm. Stand therefore, having fastened on the belt of truth, and having put on the breastplate of righteousness, and, as shoes for your feet, having put on the readiness given by the gospel of peace. In all circumstances take up the shield of faith, with which you can extinguish all the flaming darts of the evil one; and take the helmet of salvation, and the sword of the Spirit, which is the word of God, praying at all times in the Spirit, with all prayer and supplication. To that end, keep alert with all perseverance, making supplication for all the saints. (Ephesians 6:10–18)

My wife and I have talked before about how different the world is that our grandchildren are growing up in from even the world our children grew up in—not to mention the world we grew up in! There’s always been a spiritual battle raging (since sin entered the garden 6,000 years ago), but the ferocity with which it is raging hasn’t been seen in our lifetimes in the West. Children need to be equipped to stand and not fall prey to humanism, one of the many “broad ways” that leads to death.

That’s why I’m so thankful for the many children’s resources Answers in Genesis produces, such as Answers Bible Curriculum for churches (for all ages) and for homeschool, books and DVDs, programs on Answers TV, our Answers VBS, and, of course, the Ark Encounter and Creation Museum in N. Kentucky. These resources are designed to help equip the next generation to stand firm, knowing, believing, defending, and proclaiming God’s Word to a lost and dying world.

When I saw this news item about Gen Z, I immediately thought of our 2023 Answers Vacation Bible School, Keepers of the Kingdom: Standing Strong in Today’s Battle for Truth. It’s an “armor of God” VBS designed to help children understand the battle around us, distinguish the truth of God’s Word from the errors of the world, understand the gospel message, and stand firm for truth in the midst of the lies from the kingdom of darkness. I’m excited for this VBS, and I hope you are too! I believe it will make a big impact for Christ.

You can learn more about Answers VBS and enjoy 25% off your order at AnswersVBS.com when you use code VBS23B by January 10, 2023.

At Answers in Genesis, we have a big emphasis on equipping the younger generations to stand boldly for the Lord and his Word.

This item was discussed today on Answers News with cohosts Bodie Hodge, Bryan Osborne, and Dr. Jennifer Rivera. Answers News is our weekly news program filmed live before a studio audience here at the Creation Museum and broadcast on my Facebook page and the Answers in Genesis Facebook page. We also covered the following topics:

Watch the entire episode of Answers News for November 7, 2022.