Christian University Changes Back Position on Same-Sex Relationships Between Students 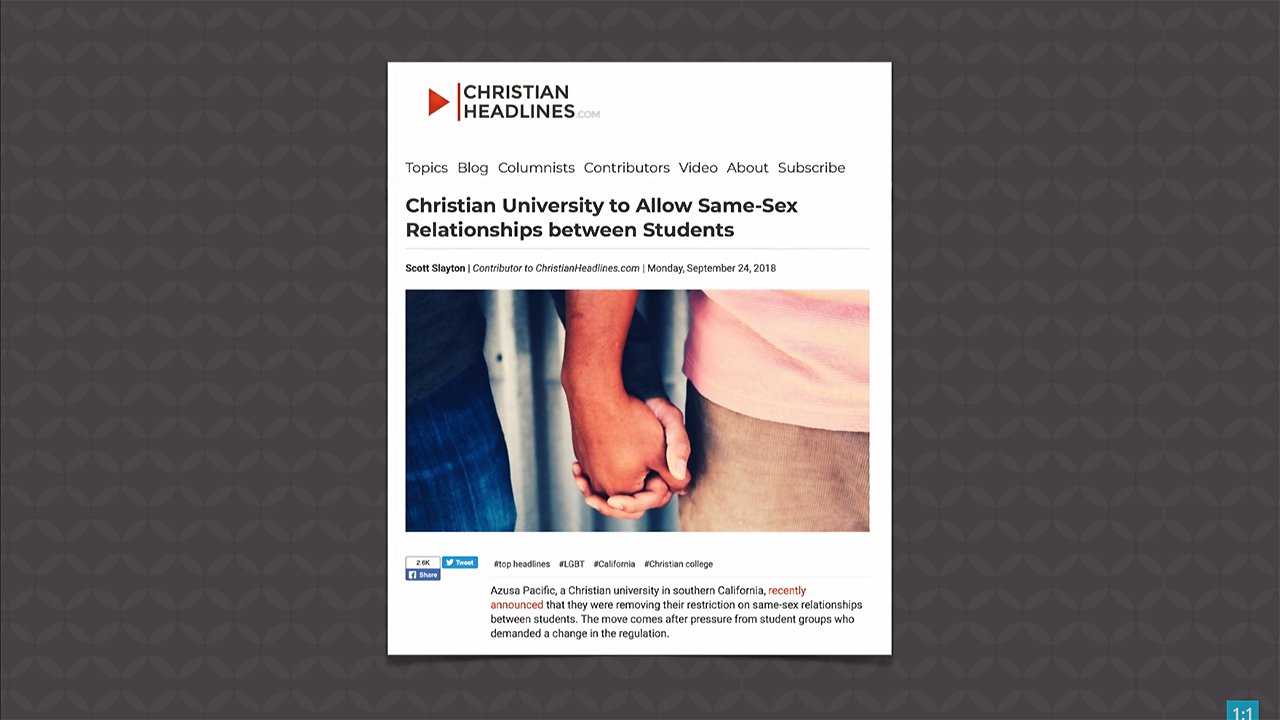 Azusa Pacific University had recently announced in the student-run campus newspaper (but then reversed course later) that the restriction on same-sex relationships between students was being lifted, effective immediately (at the start of the Fall semester). Bill Fiala, Ph.D., Associate Dean of Students made a few statements for the paper regarding the decision, including this eyebrow-raising one:

The change that happened with the code of conduct is still in alignment with our identity as a Christian institution. The language changed, but the spirit didn’t. Our spirit is still a conservative, evangelical perspective on human sexuality.

So I have to ask, what does “Christian” and “evangelical” mean? To allow for same-sex relationships is to condone a behavior the Bible calls sin! All sex outside of biblical marriage is sin! So if a Christian Institution allows for same-sex relationships and calls itself “Christian” and “evangelical,” one can no longer assume these terms mean what they used to!

According to the campus newspaper, the two main things that influenced this decision were some anti-LGBTQ slurs targeting an APU faculty member and the complaint by some students that the code of conduct unfairly targeted LGBTQ people. Now insulting and demeaning people is not an acceptable way for Christians to behave, but I find it amazing that one such incident can be so inflammatory, when Christians are often called “haters,” “homophobes,” “transphobes,” etc. simply because they believe the Bible’s definition of marriage and sexuality.

Some students at Azusa were upset with the university code, not because it condemned extra-marital sex, but because they claimed it assumed they would be unable to maintain romantic relationships within the APU code. A recent APU grad, and homosexual activist April Green, who coordinated the effort to permit homosexual relationships, was quoted as saying:

Queer students are just as able to have romanticized relationships that abide by APU’s rules. The code used falsely assumed that same-sex romances always involved sexual behavior. This stigmatization causes harm to our community, especially those serious about their Christian faith.

However, this “unfair” code of conduct by APU seems very balanced. The university’s statement on human sexuality (which is biblically based) states that any sexual activity outside of marriage between one man and one woman (which is the true biblical definition—see Genesis 2:23–24, Matthew 19:4–6) is a sin against the body, which, for Christians, is the temple of the Holy Spirit (1 Corinthians 6:18–19). So how was there any discrimination here? You are either biblically (and legally) married as one man with one woman, celibate, or you are sinning. This statement convicts all except for those who adhere to biblical commands concerning God-honoring sexuality, which is only within the confines of a marriage between one man and one woman.

The Bible has never changed! God’s statements about gender and marriage haven’t changed!

The Bible has never changed! God’s statements about gender and marriage haven’t changed! But, the culture has dramatically changed, and sadly many Christian institutions are responding by doing exactly what Jeremiah chastened the Israelites not to do—“Learn not the way of the nations” (Jeremiah 10:2).

However, the story doesn’t end there. Just a few days ago, the APU Board of Trustees issued a new statement, denying that the Board had ever approved any change to the student code of conduct and that they were reaffirming their (and the university’s) stance on the biblical definition of marriage and sexuality. If the statement is a true, heartfelt expression of their belief and not simply pandering to pressure from their supporters, then this is good news! We need to hold the APU Board up to the Lord, as they stand against internal and external pressures on biblical marriage and sexuality issues.

I discussed this item today on Answers News with regular cohosts Dr. Georgia Purdom and Bodie Hodge. Answers News is our twice-weekly news program filmed live before a studio audience here at the Creation Museum and broadcast on my Facebook page and the Answers in Genesis Facebook page. We also discussed the following intriguing topics:

Watch the entire episode of Answers News for October 1, 2018.