Answers for a Changing Culture

Protestant nations, even those that enjoyed great revivals in the past century, are rapidly becoming “Acts 17” cultures. They are losing their biblical foundation and have more in common with the pagan Athenians of Acts 17 than the Jews of Acts 2. As Christians engage a variety of cultures and ethnic groups unfamiliar with Old Testament history, evangelism in these nations is not as straightforward as it once was.

Consider Wales, famed for the Welsh revivals. Believers there preach the gospel but can struggle to see results. Paul Daniel, an evangelist raised in the Welsh capital, knows the situation well. He grew up in church but attended secular high school and university. He believes a big part of believers’ problems is their inability—and often reluctance—to show how their faith makes sense of our world. “For example,” Paul says, “dismissing a question about dinosaurs and fossils with, ‘Yes, they exist, but what matters is that you believe in Jesus,’ doesn’t inspire confidence in the Bible!” 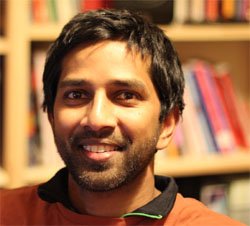 In Wales, Paul Daniel works to help believers show how their faith makes sense of our world.

But just as the Apostle Paul reached the Athenians in the book of Acts, Paul Daniel is confident that the church can reach the Welsh. He says if God’s people are willing and equipped to answer real questions from their anti-biblical culture, more people will listen to the gospel. Paul serves in one church as an evangelist and travels to speak in others. He has noticed that Christians are concerned about declining church attendance and recognize the need to preach the gospel, but they don’t necessarily see the need for apologetics to address unbelievers’ objections. The key, he believes, is to teach apologetics in churches from Sunday school upward, equipping Christians with confidence to present a watertight gospel to the lost.

Many people think that preaching the gospel alone is enough. But Paul says, “You’re telling me how amazing heaven is (even though we can’t see it), but you’re also saying that we can’t be sure of the beginning of the Bible and the stuff we actually see on the planet—and you’re asking me to believe?”

Paul remembers speaking to an atheist about where the stars came from. “There was me wondering which part of the New Testament gospel I’d point him to. Then I showed him Genesis 1:16, and it got his attention. He has been coming to church regularly ever since, and I pray God will mercifully open his eyes.”

There is a lot of work to do, but churches in Wales are beginning to emphasize training laypeople and leaders to answer those difficult questions. Now it’s time for churches to get those answers to the pagan culture around them.

Previous Article The Final Nail in Evolution’s Coffin Next Article "What Is That in Your Hand?"