George Washington Carver was a shining example of a Christian scientist who, through faith in God and in spite of his hardships, glorified his Creator in his scientific endeavors.

George Washington Carver was born in early 1864 near Diamond, Missouri, on the plantation of Moses Carver. Slavery was still legal in the border state of Missouri at the time, and Carver was born a slave. Less than a year later, the Civil War had ended and slavery abolished. Moses and his wife, Susan, adopted George and his brother James and taught the boys how to read and write. 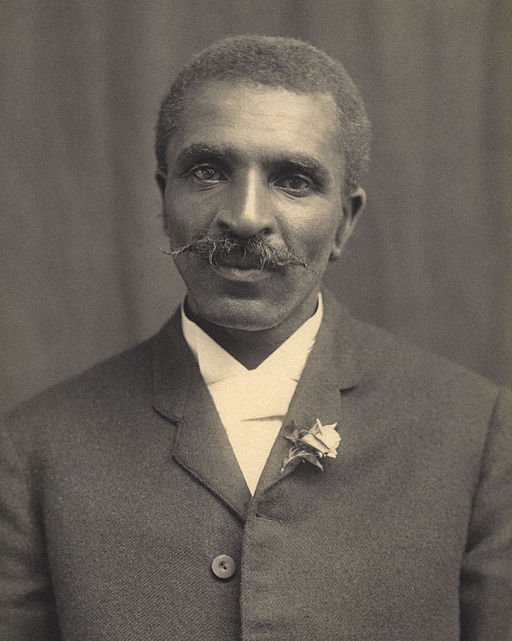 According to George Washington Carver’s own testimony, he was saved when he was 10 years old and regularly prayed to God each morning, asking to be used for God’s glory and to be given the strength to do so. He had this same conviction all throughout life as the following quotes show:

My attitude toward life was also my attitude toward science. Jesus said one must be born again, must become as a little child. He must let no laziness, no fear, no stubbornness keep him from his duty. If he were born again he would see life from such a plane he would have the energy not to be impeded in his duty by these various sidetrackers and inhibitions.1

I do not feel capable of writing a single word of counsel to those dear young people, more than to say that my heart goes out to every one of them, regardless of the fact that I have never seen them and may never do so. I want them to find Jesus, and make Him a daily, hourly, and momently part of themselves. O how I want them to get the fullest measure of happiness and success out of life. I want them to see the Great Creator in the smallest and apparently the most insignificant things about them. How I long for each one to walk and talk with the Great Creator through the things he has created. How I thank God every day that I can walk and talk with Him.2

After learning as much as he could from his foster parents, at age of 11, Carver left the farm to attend a segregated school in the nearby town of Neosho. While there, he roomed with Andrew and Mariah Watkins, an African-American couple, in exchange for help with household chores. Mariah was a nurse and midwife with some valuable knowledge of medicinal herbs, which she passed along to Carver.

After a couple years of schooling there, Carver again felt he had learned all he could and moved to Kansas, where he attended and then graduated from Minneapolis High School in Minneapolis, Kansas, in 1880. He applied to Highland College but was refused for the color of his skin. God then guided him to Simpson College in Iowa. While there, one of his professors, Etta Budd, encouraged Carver to apply to the Iowa State Agricultural School (now Iowa State University) where he obtained a Bachelor of Science degree (he was the first African-American to achieve this) and then his Master of Science degree in botany. While there, he adopted the middle name "Washington" to distinguish himself from another George Carver who attended the University.

After getting his master’s degree, he returned to the South. In 1896, he received an invitation from Booker T. Washington of Tuskegee Institute (now Tuskegee University) in Alabama to head up the agricultural school. Carver and Washington became good friends. Both had a burden to teach and help the farmers there and throughout the South. But Carver cared little for teaching, preferring research. This difference caused some friction between him and Washington.

The problem the farmers throughout the South faced was that the main crop they produced was cotton, and planting the same crop year after year had removed important nutrients from the soil. Carver taught farmers about crop rotation, telling them that they should plant cotton one year and nitrogen-fixing plants, such as soybeans, peanuts, or sweet potatoes, the next. Rotating the crops helped the soil keep the nutrients it needed and also provided additional food on the table. But at that time, the peanut was not highly prized as a cash crop or food item. The farmers were happy with the large cotton crops resulting from the crop rotation, but were less pleased about the huge surplus of peanuts that built up and began to rot in local storehouses.

Because the farmers were planting new plants but had no idea what to do with the excess, Carver invented hundreds of new uses for his suggested crops. He discovered that sweet potatoes could be used to make glue, vinegar, shoe polish, and many other things.3 Carver also popularized the use of peanut butter (although he was not the one who invented it). He found or invented many other uses for the peanut, including inks, dyes, shampoos, car fuel, peanut oil, shaving cream—over 300 different uses. He introduced these products to the public via brochures, and the market for peanuts skyrocketed as a result. Historians largely credit Carver with saving the agricultural economy of the rural South.4 After Booker T. Washington died in 1915, Carver began cutting back his teaching duties and expanding his research duties and community charity operations, almost fully giving up teaching by 1921.

The Peanut Man Gives the Glory to God

George Washington Carver would receive the nickname “the peanut man” when in 1921 he testified before the Ways and Means Committee of the U.S. House of Representatives on behalf of the peanut industry, which was seeking tariff protection.5

Carver didn’t patent most of his inventions, patenting only three later in his life, two for paint and one for cosmetics.6 Carver gave glory to God and wanted everyone to be able to use the products he developed. Carver once said, “The Lord has guided me. He has shown me the way, just as He will show everyone who turns to Him.”7

Alongside his inventions, Carver worked toward eliminating racism and encouraging harmony in the South. He received the Spingarn Medal from the NAACP in 1923 for outstanding achievement and an honorary doctorate from Simpson College in 1928.8

No Conflict Between Science and Divine Inspiration

Carver never was ashamed to express his faith. For example, in 1924, a reporter for the New York Times criticized Carver for mentioning that God was the “inspiration” for his scientific discoveries with the headline, “Men of Science Never Talk That Way.” In a verbal rebuttal, Carver called it a “gross misunderstanding” of his use of the phrase “divine inspiration,” saying, “Inspiration is never at variance with information; in fact, the more information one has, the greater will be the inspiration.” Carver then separated himself from “scientists to whom the world is merely the result of chemical forces or material electrons.”9

Carver died at the age of 78 on January 5, 1943, at Tuskegee University after teaching there for 47 years. He was buried next to Booker T. Washington on the Tuskegee University grounds. He is noted as frequently saying throughout his life that “faith in Jesus Christ was the only mechanism by which I could effectively pursue and perform the art of science” and “The Lord has guided me, and without my Savior, I am nothing.”10

After Carver’s death, mechanization, factory farming techniques, and extensive use of fertilizers and pesticides began to replace his carefully thought-out methods. In recent decades, the problems with this type of farming are become more and more obvious, and there has been a call for sustainable agriculture, such as what Carver taught, with farmers working with the land (as good stewards of it) rather than against it.

George's favorite Bible passage was Psalm 121:1–2: “I lift up my eyes to the hills. From where does my help come? My help comes from the Lord, who made heaven and earth.” George Washington Carver was a shining example of a Christian scientist who, through faith in God, saw and glorified his Creator in his scientific endeavors—even despite hardship—and changed the world for the better.