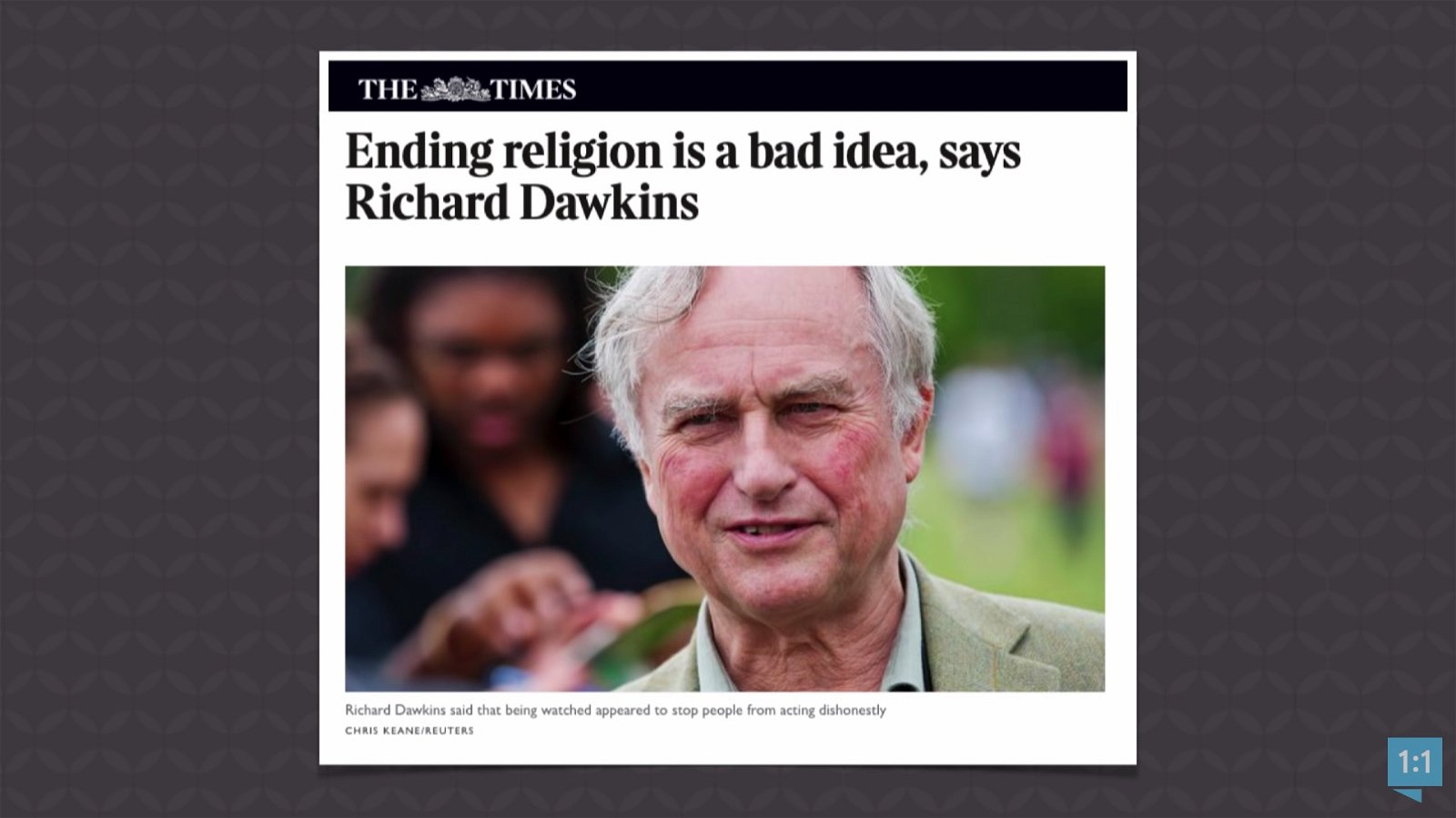 The claim that ending religion might be a bad thing is not a statement you’d expect to hear from the world’s leading atheist, Richard Dawkins. But he recently made those comments in response to research that shows that people are more likely to behave honestly when they feel they are being watched. He says that without a belief in God, “people may feel free to do bad things because they feel God is no longer watching them,” and it would “give people a licence to do really bad things.” Now, of course, everyone has a religion, so what does he really mean by saying ending religion might be a bad thing? He really means ending Christianity!

Dawkins has spent his life fighting against God (the God he doesn’t believe even exists). But he still recognizes that atheism (the worldview religion of Richard Dawkins) doesn’t provide the foundation for morality that is needed to keep people from doing “really bad things.” Without a biblical foundation, anything goes—who is to say what is right or wrong? There is no ultimate foundation. It becomes arbitrary; everyone does what’s right in their own eyes. In fact, Dawkins is admitting that atheism is totally bankrupt morally.

The only way we can have an ultimate standard for morality is if God exists and the Bible is true. Without it, morality is simply arbitrary.

The only way we can have an ultimate standard for morality is if God exists and the Bible is true. Without it, morality is simply arbitrary. Dawkins ultimately knows this because God has written his law on Dawkins’ heart (Romans 2:15), as he has on every heart. And, ultimately, Dawkins knows God exists—that is clear from God’s Word. Dawkins suppresses the truth in unrighteousness (Romans 1:18).

Dawkins may think the masses need to maintain a belief in God for social order, but there’s a much more important reason to believe in God, and his Son, Jesus Christ: to respond to the gospel and receive eternal salvation. Apart from Christ, we are headed to an eternity without God because of our sin. But Jesus Christ took on flesh, died on the cross in our place, and rose from the dead. If we repent and believe on his name, we receive the free gift of eternal life. That’s the message Dawkins, and everyone else, needs to believe and accept.

This item was discussed on Monday on Answers News with cohosts Dr. Georgia Purdom, Avery Foley, and frequent guest Roger Patterson. Answers News is our weekly news program filmed live before a studio audience here at the Creation Museum and broadcast on my Facebook page and the Answers in Genesis Facebook page. We also covered the following topics:

Watch the entire episode of Answers News for October 21, 2019.