“Thank you” and “What a fantastic conference!” These are not our words, but the comments we have received time and time again following the UK Mega Conference just last week. In fact, one email we received said

Many thanks to Simon and all colleagues at Leicester and Ken and all colleagues from America and all speakers for a most informative and challenging conference. We are most grateful for what you do, and we have already passed on some relevant information to others who would have been there but for other commitments. We see a huge challenge in the current need for a fresh reformation within mainstream church and will continue to pray and seek to support your work as we are sure you will do for such as ourselves within local communities.

It was so thrilling to see people leave the conference encouraged and equipped to share what they had learned.

The conference was attended by over 1,600 people and not just from the UK, but from all over the world: Austria, Australia, Belgium, Denmark, France, Holland, India, Mexico, Norway, Poland, Portugal, Republic of Ireland, Romania, Switzerland, and the United States. We were particularly encouraged by the number of young people who came. At least 170 5–11 year olds joined the Mega Kids group, led by Tirzah Jones (who did an outstanding job). They loved the great science and Bible teaching from scientists like Dr. Danny Faulkner. We also had around 270 12–17 year olds attend the main talks. With the millennial generation missing from many UK churches, it was great to see so many there who were encouraged to see that they can trust what God’s Word says about God’s world. 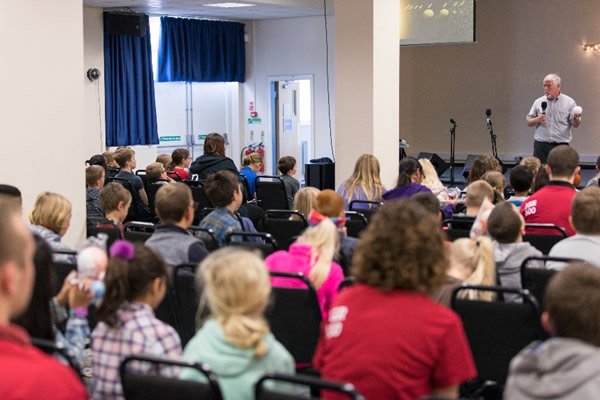 Dr Danny Faulkner speaks to the 5–11 year olds about the universe.

Dr. Nathaniel Jeanson’s talk was a highlight of the conference as he gave overwhelming data from his brand-new book, Replacing Darwin, to demonstrate that Darwinian evolution is not supported by the science of genetics. Dr. Jeanson gave three talks at the conference, and his book sold out after his second talk!

People commented that the conference equipped them to defend the Christian faith and battle the religion of secularism that is rife within Western culture. Many Christians no longer take God’s Word as their guide but instead are allowing the world to influence their thinking and are reinterpreting God’s Word in light of evolutionary ideas. However, Answers in Genesis remains committed to calling the church back to the right foundation beginning in the book of Genesis!

We pray that what was heard at the conference will have a lasting impact on all who attended.

Previous Article Why Should We Give Our Children a Christian Education?