Last week I had a great opportunity to teach a number of students for three days as part of the Oxford Symposium run by Crown College. The students were part of the G.A.P. (Gospel Apprenticeship Programme) at Crown Hall, hosted by the Crown Christian Heritage Trust. The G.A.P. programme is a one-year course that trains young people in apologetics, creation science, and evangelism. 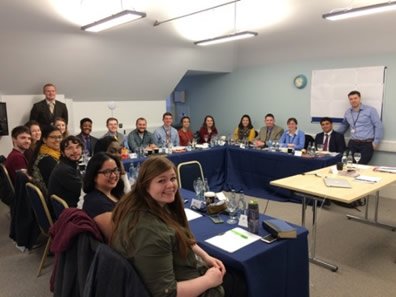 Me (far right) teaching creation apologetics to the students.

Our three days of teaching included sessions on “Answering Atheism,” “Jesus, Scripture, and Creation,” and “Defending the Bible in a Scientific Age.” Each of these sessions is designed to deal with the skeptical questions of the age and to defend the truth of Scripture. After our sessions each day, the students went out into one of the busiest streets in the city of Oxford and share the gospel with people. It was great to see so many young people desiring to put into practice what they had learned. The students also handed out invitations for an evening talk by Professor Stuart Burgess on “Creation by Design.” 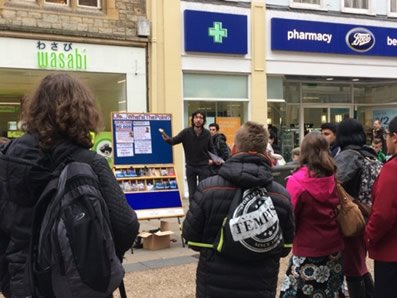 One of the students street preaching.

I am thankful to Crown College and Oxford Baptist Chapel (our host church) for taking a firm stand on God’s Word’s from the beginning in Genesis and for being willing to train young people in the truth of God’s Word so that they proclaim the gospel to an increasingly hostile culture. 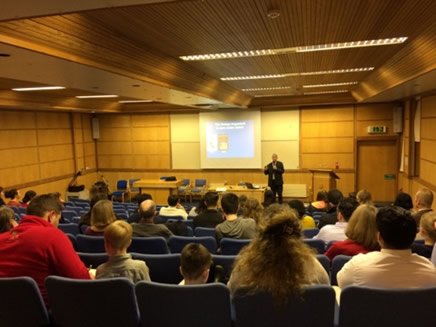 The church today needs to raise up more young people who know how to answer the skeptical questions of the age and be able to share and defend their faith with great boldness.