A big part of AiG’s ministry is encouraging the next generation to stand on the authority of God’s Word from the very beginning. We are thrilled when we hear about kids who are using our resources and sharing them with others. I recently received an encouraging note from a 13-year-old who loves our resources and the Creation Museum:

I live in Northern Minnesota, 2 hours from the Canadian border. Despite the miles, we bought a 5-year membership to the Creation Museum and we have been there three times and are looking forward to the fourth. I have been greatly encouraged through the ministry of AiG to share my faith with others. My family loves the AiG books and DVDs, and we add to our collection every time we are at the Museum.

With his letter, he also included an illustration that he drew: 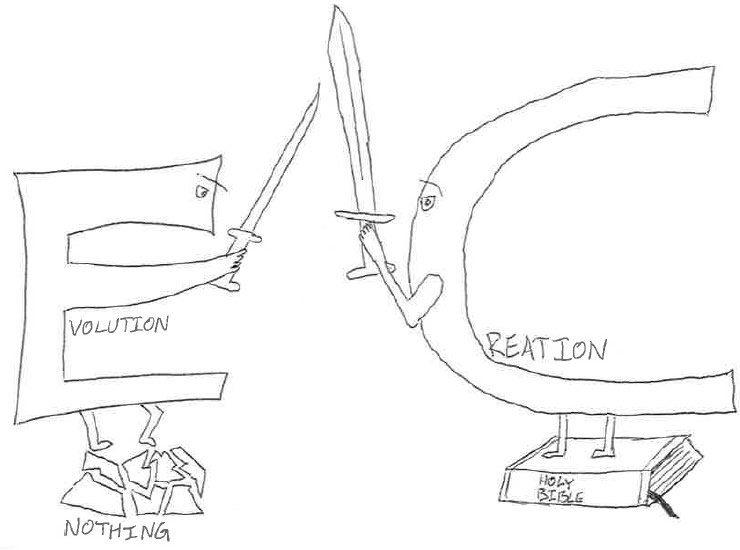 This drawing illustrates the battle between creation and evolution, and I am thrilled to see young people understanding these issues and standing firmly on God’s Word from the very beginning.

As I have said before, it is not a battle over the evidence! It’s a battle over your interpretation of the evidence that is determined by your starting point. And your starting point is determined by your authority. Those who believe in evolution start with man’s ideas about the past—they reject God’s Word as their authority and make man the authority. They stand on a foundation of man’s fallible ideas and they use that to interpret the past. But those who start with God’s Word stand on the solid foundation of the eyewitness account of the Creator who never lies (Titus 1:2). We can trust God’s Word from the very beginning and start our thinking, not with man’s ideas, but with God’s unchanging Word.

We need more people like this young man who refuse to compromise on God’s Word and boldly proclaim the truth of Scripture. I encourage you to equip your children by bringing them to the Creation Museum. This year we have a special 2 buy 2 promotion—buy two tickets, get two of equal or lesser value free! This is a great opportunity to bring family, friends or a group from church. The 2x2 promotion is also meant to get people thinking about the life-size Noah’s Ark that will open next year—keep up to date at ArkEncounter.com. You can learn more about this promotion here. I encourage you to take advantage of this special promotion and bring your young people so they can be equipped to answer the skeptical questions of this age.

As we consider the next generation we are training up, what can we do with a Western world that is becoming more anti-Christian and attempting to remove any vestiges of Christian influence and heritage?

Well, I encourage you to read my article Needed Today: Hezekiah Reformers and then join me Tuesday, April 28, at 7:00 PM (ET) to chat live on a Google Hangout about this article from the latest issue of Answers magazine.

You can submit questions in advance by email to authorchat[at]answersmagazine[dot]com or just tune in to listen while everyone else does the questioning here.