The headline of a recent article boldly declared, “The Wild Experiment That Showed Evolution in Real Time.” Did this experiment involving light and dark colored mice really show evolution? Well, the subtitle gives away the truth, “an ambitious team of scientists has illustrated the full process of natural selection in a single study.” Did you notice how the title used the term “evolution” to describe what the subtitle correctly calls “natural selection”? And what was the article really describing? Well, that mice produce . . . mice!

This use of terms is remarkably common when it comes to reporting on such studies. It’s a logical fallacy known as equivocation. What these researchers are studying and observing in the present is the process of natural selection. But they equivocate that observable process with evolution, an unobserved, non-repeatable interpretation imposed on the evidence.

This is simply natural selection at work.

Here’s what the scientists actually observed: in large outdoor enclosures featuring different soil colors, the mouse populations quickly adapted to their surroundings as light-colored mice in dark-colored fields were quickly picked off by owls and vice versa. This is simply natural selection at work. It’s an observable process that leads to changes within a population. (This is similar to the famous peppered moth example that was once used in public school textbooks as evolution supposedly in action.)

But here’s where it differs from evolution. The information for light and dark colored mice is already present in the population. At the start of the experiment, a mutation in the Agouti gene (the delta-Ser mutation) was equally common in the mice population. But after three months, it had become more common in two of the lighter-soil mice populations, and rarer in all the darker-soil ones. Coupled with natural processes of predation, this caused the overall mice fur color to shift in a certain way, but no new genetic information or features are added to the mice. Mice remain mice, and they reproduce mice.

Molecules-to-man evolution requires the addition of brand-new genetic information, something that has never been observed. Mutation and Natural selection is not evolution. 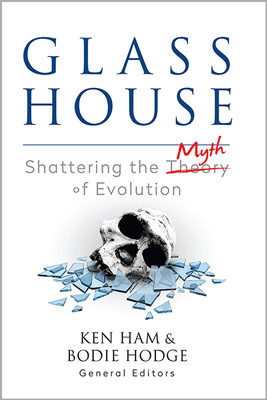 Many people believe there’s an incredible amount of evidence for evolutionary beliefs. But most of this so-called evidence doesn’t actually support evolution the way that it is claimed to. We detail this finding regarding many common evolutionary arguments such as chromosome 2 fusion, the horse sequence, whale evolution, and so much more in our brand-new book Glass House: Shattering the Myth of Evolution.

Glass House features chapters from a powerful team of credentialed scientists, researchers, and biblical apologists as they take on the pillars of evolution. You’ll be encouraged to see that the theory of evolution is nothing more than a glass house . . . and it is cracking.

My good friend Ray Comfort, the CEO of Living Waters, says of this brand-new resource:

To shatter the myth of evolution, one must first understand the structure of which it is made. Glass House does an incredible job of breaking down the evolutionary model and sharing how to not only combat the stones being thrown against the Biblical model, but how to shatter the very foundations of the evolutionary home our culture has built and is currently residing.

I encourage you to order a copy of Glass House for your home, church, or school library or for an evolutionist you know. It’s sure to spark some good conversations and help them reconsider their beliefs.

Previous Article Meet a Goliath Bird-Eating Tarantula, Hissing Cockroaches, and a Vinegaroon Next Article Homeschoolers—Join Us for Our High School Labs