The Rest of the (Media) Story

Famous American radio broadcaster Paul Harvey is remembered for a radio program that began, “Now, the rest of the story . . . .” In recent times, Americans have been increasingly waking up to the extreme bias of much of the secular media, with an understanding that you just can’t necessarily trust what the media broadcasts or publishes. Of course, we at Answers in Genesis aren’t surprised by this at all, as our ministry, especially our Ark Encounter and Creation Museum, has been misquoted and misrepresented and has seen facts distorted and information deliberately left out by many media outlets for many years. 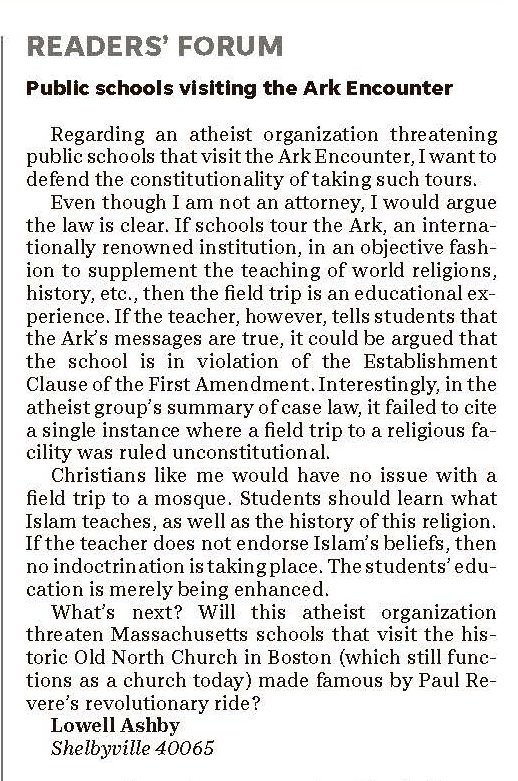 This letter to the editor appeared in Sunday’s Courier-Journal in support of school tours to the Ark.

I read an article about the Ark encounter that recently appeared in the Louisville Courier-Journal and was reprinted in our area papers, the Grant County News and Cincinnati Enquirer. As an exercise to remind everyone to be diligent in questioning and fact-checking when reading news articles, I also decided to take excerpts from this article and offer some commentary to give you “the rest of the story.” This example will also illustrate that sometimes the information is correct in an article, but additional information that should have been included will put an entirely different perspective on the subject.

Are school trips to Ark Encounter legal? Ken Ham and group wage battle . . . Ken Ham, the creationist founder of the Ark Encounter in Northern Kentucky, is sparring with a national group over whether public schools are legally allowed to visit his religious attractions. Earlier this month the Freedom From Religion Foundation, which promotes the separation of church and state, sent letters to more than 1,000 public school districts in Kentucky and four other states saying that field trips to Ham's Ark Encounter and Creation Museum are unconstitutional.

Over the years, the Ark Encounter has never deliberately marketed to public schools, and we have actually never purposely tried to reach out directly to recruit public schools to take field trips to the Ark, until now.1 Now, certainly, when atheistic groups like the Freedom From Religion Foundation (FFRF) have misrepresented the First Amendment and threatened schools about taking field trips to the Ark (or Creation Museum) claiming they would be unconstitutional, we have responded. We have stood up for the constitutional rights of students and teachers and for the free exercise of religion in this nation and have shared those thoughts with public schools.

Actually, since the Creation Museum opened in 2007, as far as we are aware, only a handful of public school classes have ever visited our attractions as an official field trip. To understand how we responded to the FFRF and other atheist groups who have threatened schools, please read the article we published at https://answersingenesis.org/religious-freedom/ffrf-threatens-public-schools-over-visits-to-ark-and-museum/. Because the FFRF waged a battle against public schools, the First Amendment, and the Ark Encounter, we responded to its aggression with an offer.

Regarding the Courier-Journal’s headline “Ken Ham and group wage battle,” I point out that it’s not a battle between the FFRF and me. The FFRF with its press releases and threatening letters to 1000 public schools, loaded with false information, led us to respond publicly.

Ham is the founder of Answers in Genesis, a Christian creationist ministry that runs the Ark Park in Williamstown and the Creation Museum in Petersburg. Creationists reject the teaching of evolution and believe the Earth was created in a few days about 6,000 years ago, based on the Bible's teachings in Genesis.

The Creation Museum and the Ark Encounter show dinosaurs and humans living alongside each other. According to the U.S. Geological Survey, dinosaurs went extinct nearly 65 million years before people appeared on Earth.

Yes, the above statements are true (although we don’t accept the belief that dinosaurs died out 65 million years ago). But as is typical of much of the media today, the paper decided to highlight our beliefs on the age of the earth and dinosaurs to imply we are against science. In almost all media reports, what is left out is that we have numerous highly qualified scientists who worked on all the exhibits at the Ark and Creation Museum, providing a phenomenal wealth of scientific information in those exhibits that is now available to the public.

The foundation [FFRF] was one of several groups outraged when the theme park won more than $18 million in state tax incentives when it was being built in 2014. State officials tried to take the tax break away after learning the park would only hire Christians, but park officials sued in federal court and won.

After its first year, the Kentucky government cut the Ark Encounter a rebate check for $1.8 million.

Why were groups like the FFRF outraged because a tourist attraction that qualified for a Kentucky tax incentive rebate has been receiving the rebate, just like any other tourist attraction can, which is why a federal judge ruled decisively in the Ark’s favor to receive this incentive based on the First Amendment rights. They were outraged because they want to discriminate against the Ark as it has a distinctively Christian message. Actually, the amount of the tax-incentive rebate pales in comparison to incentives given to companies like Amazon in Kentucky, and other states! Incentives to get companies to locate in a particular state are commonplace and involve hundreds and hundreds of millions of dollars.

If a tourist attraction will build in Kentucky, and if it fulfills requirements such as bringing tourists into the state and is thus generating a lot more money coming into the area to help the local economy and generate extra revenue for the state, then such an incentive is a win/win situation. The state offers a rebate to the tourist facility from sales revenue generated only within the park itself, up to a certain maximum depending on what was approved (based on capital expenditure) and how much is generated.

For instance, if the approved amount is $1.8 million dollars per year for 10 years, the facility will receive only what it generates in sales tax, to a maximum of $1.8 million. If the park only generated $750,000 in taxes, that’s all that would be received that year as a rebate. Now, it is true that the Ark Encounter received a rebate check for $1.8 million in its first year. But it’s also true that the park generated more than $1.8 million in sales tax (and the state keeps the rest). But even more important to understand is that $1.8 million pales in comparison to the multi-millions of dollars the state received from sales tax generated outside the parks from restaurants, hotels, gas stations, car rental agencies, etc. Keep in mind, no state funds were used in the building of the Ark contrary to many media reports, and the $1.8 million dollars a year in potential rebates for 10 years is less than a third of what was borrowed in bonds. AiG spent over $100 million for the first stage of the Ark Encounter, of which $65 million came from bonds funded by our supporters—and those bonds plus interest will be paid off over 15 years.

Furthermore, the Ark is rather unique in that 91 percent of those who visit live outside Kentucky, so this is all new money the state receives, not recycled within the state. The Ark has been an incredible revenue generator for the state. Also, the Ark and Creation Museum employ more than 1000 people at peak times. Question: What economic impact has the FFRF had on its local and state economy in Wisconsin with their small number of employees?

University of Louisville law professor Russell L. Weaver said if a field trip to the Ark Encounter is taken as part of a class on religion, and no attempts are made to convert students, then it may pass legally.

"Context, purpose, and motive are all essential in evaluating whether something like this is an inappropriate endorsement of religion or not," added professor Steve Sanders, who teaches constitutional law at Indiana University.

Actually, this statement by the attorney is certainly more consistent with the interpretation of the First Amendment by the courts—see the letter we posted from a constitutional legal expert.

Corey Shapiro, legal director of the American Civil Liberties Union of Kentucky, said courts have also made clear that "public schools may not teach creationism or intelligent design — theories which the Ark Encounter espouses."

Actually, courts have ruled against legislating to make the teaching of creation mandatory in public schools. Courts have decided that students can be taught other views from a secular perspective—in other words, provided they are not told that they have to believe such views. If students were to come on a field trip to the Ark as an educational experience, providing they were not told they had to believe all that is taught in the exhibits, the visit is perfectly legal. Teachers are not to promote religion, but the courts have ruled they are not to inhibit it either.

We need to be constantly reminded that groups like the FFRF, ACLU, American Atheists, etc. have an agenda to discriminate against Christianity. And so do many reporters who write articles for newspapers, magazines, and websites. Always remember to ask, “What is the rest of the story?”