The Duck-Relative That’s Just a Duck

When you think of fossils, you probably picture dinosaurs, trilobites, or other exotic and extinct creatures. But did you know there are many examples of much more familiar creatures throughout the fossil record? A recent article highlighted the discovery of a “duck-relative” (otherwise known as a duck), which they call a “modern bird,” from the supposed “Age of Dinosaurs,” according to the evolutionary timeline.

This duck group supposedly survived the dinosaur extinction event some 65 million years ago and is allegedly “the first documented case of a group of birds surviving such extinction.” Now, dinosaurs supposedly evolved into birds. Some evolutionists will even go as far as to say that dinosaurs never went extinct—arguing that they are eating at our birdfeeders and flying through our skies today. But how could dinosaurs have evolved into birds if we have examples of modern birds in the very same layers as dinosaurs? 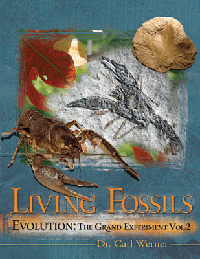 And, contrary to what the article states, these ducks are certainly not the only example of modern birds buried with dinosaurs. We find fossilized parrots, albatrosses, loons, owls, flamingos, penguins, sandpipers, and more buried in the same layers as dinosaurs. And one evolutionary researcher claimed that such evidence supports the idea that “most or all of the major modern bird groups were present in the Cretaceous” (a so-called “dinosaur layer”). While these fossils are rarely displayed in museums, they exist and are a serious challenge to the evolutionary timeline.

But such finds are not a challenge to a biblical worldview. These birds were buried during the global Flood of Noah’s day. The layers don’t represent eons of evolutionary time—they most likely represent ecosystems successively buried by rising floodwaters. The reason we find ducks and other fowl so high in the fossil record is because birds, being quite mobile, would likely survive the initial stages of the Flood, only to be buried later.

God, though, in his mercy, preserved the bird kinds on the Ark. After the Flood, these bird kinds spread out and filled the earth. Some kinds went extinct, others thrived in the new world, speciating and filling a wide variety of environments.

To learn more about fossils of so-called “modern” animals, check out Living Fossils, an excellent book by Dr. Carl Werner. You’ll be shocked by what’s found in the fossil record that you never knew about!

Oh, and ducks have always been—well—ducks!

You can see all our resources at AnswersBookstore.com.