To follow up the cancellation of my evolution/creation talk at the University of Central Oklahoma next month, I’ve noticed that many media outlets across America have been covering this blatant denial of free speech.

The Associated Press has been syndicating a news article around the country on the UCO cancellation, appearing in countless newspapers and websites.

The AP piece essentially suggests that the university was free to bump me because it was under no contractual obligation to hold my talk on its campus. Putting aside the dubious contention that free speech at a tax-supported university must be done by “contract” (we already have a contract: it’s between the United States and its citizens, and it’s called the First Amendment), I must point out to the AP and other media that we did have two signed contracts—one that we composed using our usual template and one from the UCO called a Guest Speaker Contract. Both were signed by a school VP, and the UCO version even has the university seal on the contract. The two contracts are attached. 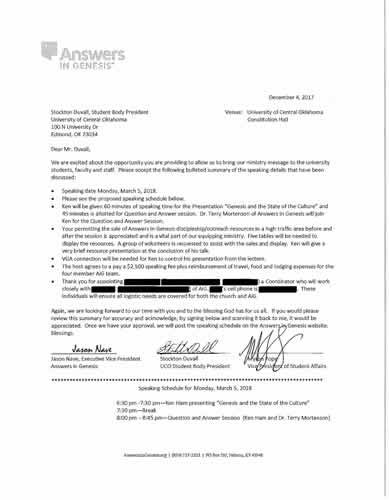 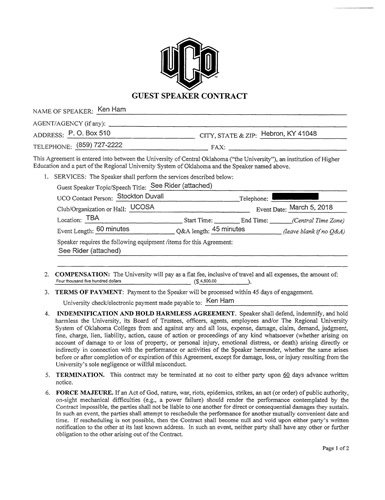 AiG and UCO were in the process of discussing some minor changes to the contract when we were notified that my talk was being cancelled. Nevertheless, we did have contracts signed by university officials. So it will now be up to the event organizers who invited me to speak at UCO as to their next step. They have already moved my March 5 talk to Fairview Baptist Church in Edmond, near the UCO campus.

Here is the AP piece as picked up by the Houston Chronicle (and by other papers, like our local Cincinnati Enquirer newspaper): “Creationist’s Speech Cancelled at University in Oklahoma.”

One of the best commentaries on AiG getting booted from UCO was written by Todd Starnes: “University: Drag Queens Are Welcome, Creationists Are Not.”

You can find our full article on the UCO cancellation in “University Denies Free Speech to Ken Ham and Boots Him from Speaking.”

Yes, the assault on the religious freedoms of Americans continues, as the First Amendment’s guarantees of free speech and the free exercise of religion are being trampled upon by some intolerant people.