Can Creationists Be Innovators?

Bill Nye, popularly known for his Bill Nye the Science Guy kids’ TV show, recently wrote a new book titled Everything All at Once, which gives guidelines on how to “unleash your inner nerd, tap into radical curiosity, and solve any problem.” In a small part of his book, Nye calls out Answers in Genesis and the Ark Encounter. He claims we’re part of “a much wider antiscience, antiprogress movement.” He says that if children continue to learn creation science they won’t be innovators or engineers.

I strongly feel that if parts of this country raise a generation of people trained not to think for themselves, we are all going to pay the price. We are all going to be burdened with reeducating these kids and young adults. The workers in these nearby economies will not have been brought up with the processes of science and reason that help us all understand the world. They will not grow up with the tradition of innovation that has led to the creation of search engines, smartphones, magnetic resonance images, and electric sports cars.

Creationists Can’t Be Innovators? You Sure of That, Bill?

It’s incredibly ironic that Nye includes “magnetic resonance images” (the MRI) on his list of technologies developed by this “tradition of innovation” that creationist kids are supposedly missing out on. The MRI was invented by Dr. Raymond Damadian. Dr. Damadian is a bold biblical creationist (I mentioned him in my 2014 debate with Nye) who loves God’s Word and the gospel, and credits God with his remarkable discovery and innovation. Nye says creationists can’t be engineers, but then proceeds to list an engineering marvel designed by none other than a creationist! He just destroyed his own point!

Creationists can certainly be innovators and engineers (as well as fantastic scientists in any field, even supposed evolutionary ones such as biology, geology, or paleontology—just like the many PhD scientists employed by Answers in Genesis). I’ve publicly challenged Nye many times to provide just one example of a technology that was developed because of a belief in millions of years or evolution. He’s never provided one because, well, there aren’t any. An evolutionary worldview does nothing to further technology—the question of origins has nothing to do with it!

You see, there are two kinds of science. Observational science is directly testable, observable, and repeatable. It’s what was used to put a rover on Mars, develop WiFi, and, for Dr. Damadian, to make the MRI. But historical science deals with the past (e.g., rock layers and fossils), so it isn’t directly testable, observable, and repeatable. So what you believe about the past can directly influence how you interpret the evidence in the present. If you start with a belief in millions of years and evolution, that’s how you’ll interpret the evidence. But if you begin with God’s Word as your starting point, you’ll interpret the evidence through the lens of God’s Word and the history recorded in it.

We Love Science—and We Want Kids to Love It Too!

We want young people to be innovators and scientists because we at AiG love science.

We want young people to be innovators and scientists because we at AiG love science. We want them to study God’s beautiful creation and universe for his glory and to develop technology to help us fight the effects of the Curse. We want to inspire young people to love science (and to have a biblical perspective about science), so we offer homeschool science curricula, science books and DVDs, hands-on workshops at the Creation Museum, astronomy programs, and more! We even partner with a camp, Camp Infinity, to help encourage kids to love STEM (science, technology, engineering, and mathematics) and to think about it biblically.

Learn About STEM with the Best of British 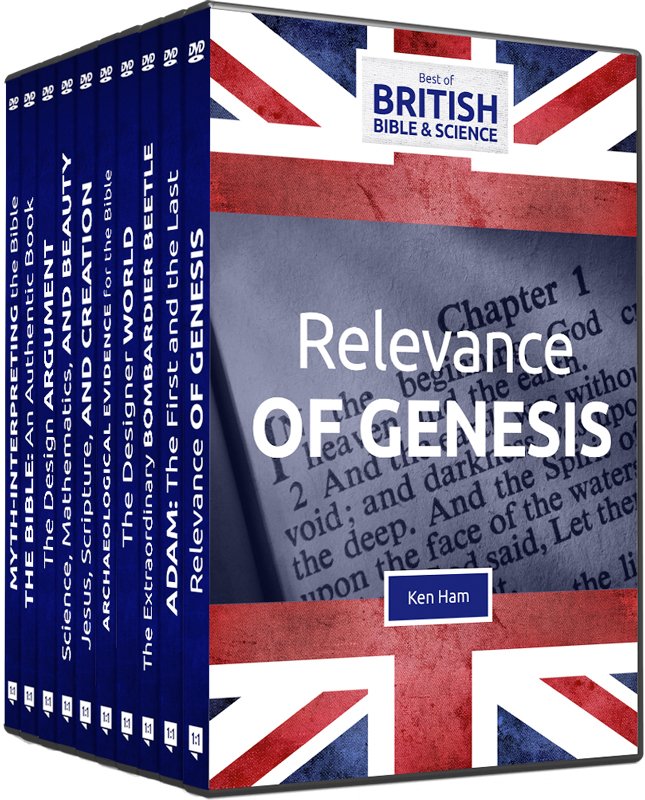 One such resource that will inspire your young person in STEM learning is our brand-new “Best of British Bible and Science Conference” DVD set. Earlier this year we hosted a unique conference here at the Creation Museum that featured the best of British creation apologists (and some AiG-US speakers). Among the many talented communicators were Professor Stuart Burgess, who teaches engineering design at the University of Bristol (UK), and Professor Andy McIntosh, who specializes in combustion and thermodynamics. They each gave sessions on topics like design engineering, beauty, mathematics, and more. Their sessions, now on DVD, are a great way to encourage a biblical view of STEM.

This conference DVD set has something for everyone, from archaeology to theology to mathematics and engineering. I encourage you to bring this conference set home for your personal, church, or school library. Learn more or order your copy today at our online store.