It’s How You Say It

Did your mom ever tell you, “It’s not what you said, it’s how you said it?” I’ve noticed in the secular media, especially recently, that it’s all in the way words are used. So compare how the media describe an atheist church to what media have been saying about our Ark Encounter in Northern Kentucky.

Now, keep in mind the Ark structure is permitted to exit 10,000 people at one time. There can be over 5,000 people inside the three decks of the Ark at one time, yet some parts of it can look fairly empty. Since March we’ve been getting thousands daily at the Ark—and since Memorial Day weekend, we’ve seen many 5,000–8,000 days. Yet atheist groups and many secular media (and even some Christian media) either imply or outright state that hardly anyone is coming to the Ark! When our 4,000-space parking lot has nearly 2,000 vehicles in it (which means about 8,000 people in attendance), they say the park is quite empty.

But when the media (in this case The Denver Post) reports on an atheist church in Denver, they state,

Wow, that sounds like a large gathering of people. But then we read, “They’re four dozen strong” (i.e., hardly any). To compensate for the small group, the reporter state that the people were “swirling about the long rectangular hall like in a hive.”

Yep, it’s all in how things are said. As I’ve indicated before, much of the media (and many secular bloggers) in our western world are out of control, not even trying to hide their bias against anything Christian!

We recently had another 8,000-guest day at the Ark Encounter (and 3,000 at the Creation Museum (45 minutes away). This photo represents the Ark parking lot at 2 p.m. that day (people come and go all day long, and this parking lot was built for future expansion with 4,000 spaces for 16,000 people as other phases are built). 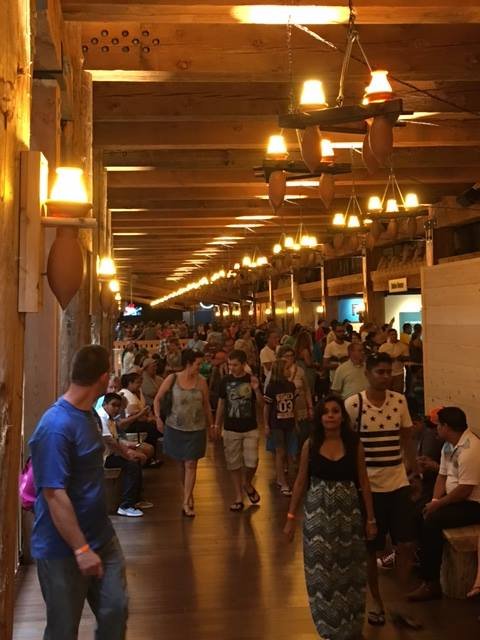 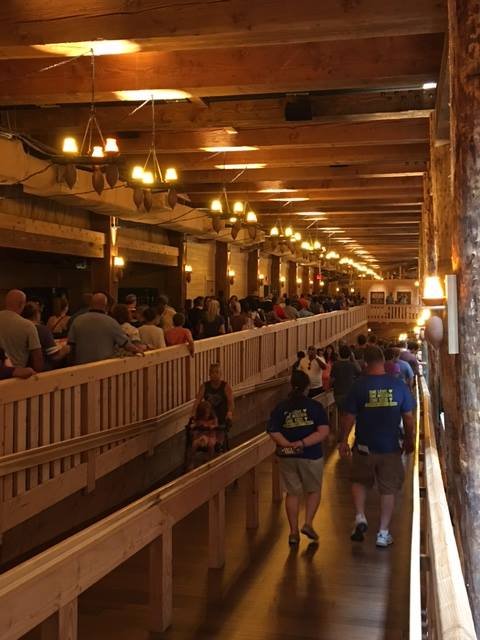 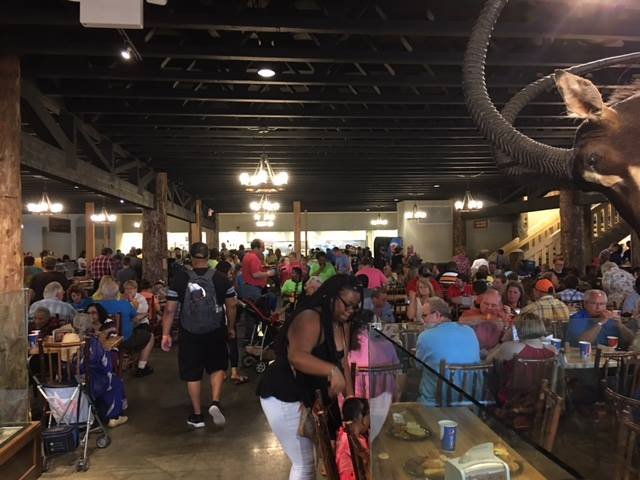 Now, it really was difficult and time consuming for me to Photoshop in all those cars and buses and insert all the people. (I’m kidding—that’s fake news, of course, but if I didn’t add that I was joking, someone else would use it against me!)

These aerial photos of the Ark were taken by a helicopter pilot who is a big fan of AiG. 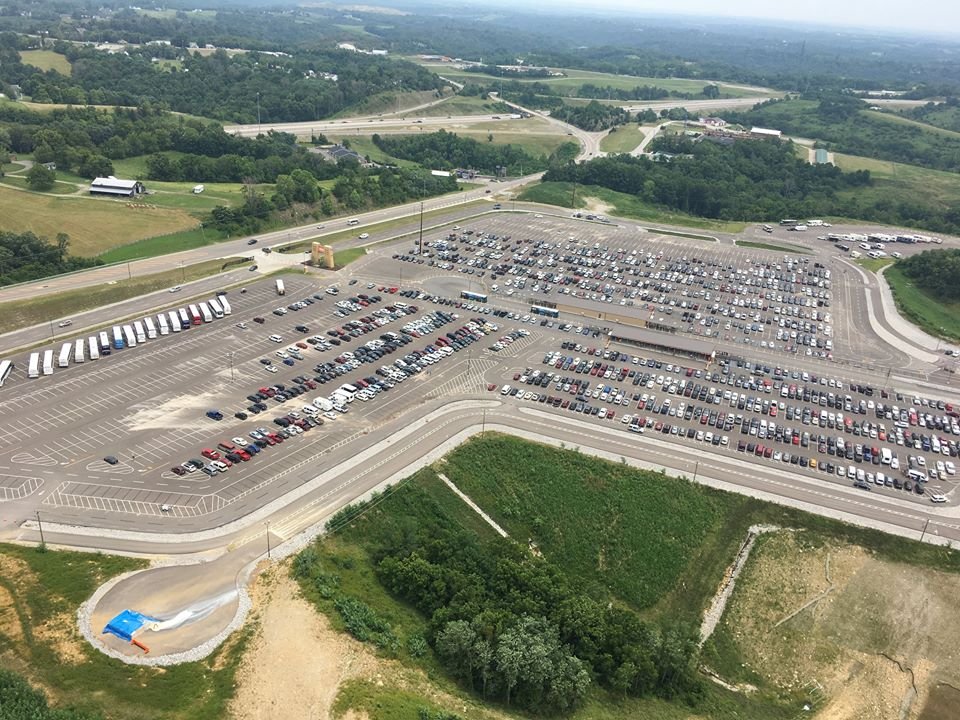 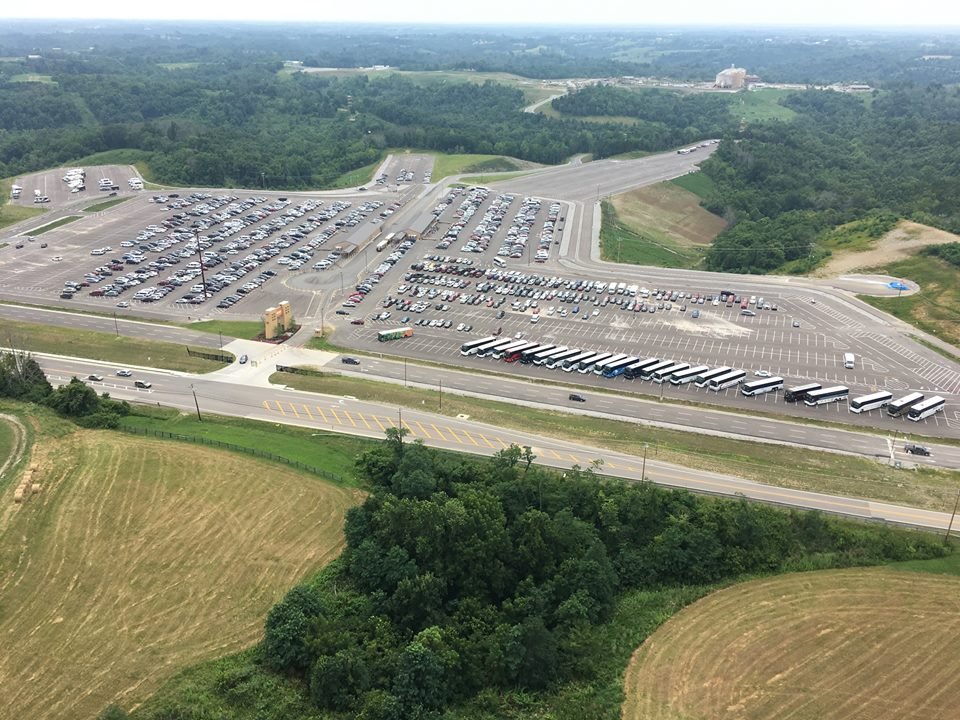 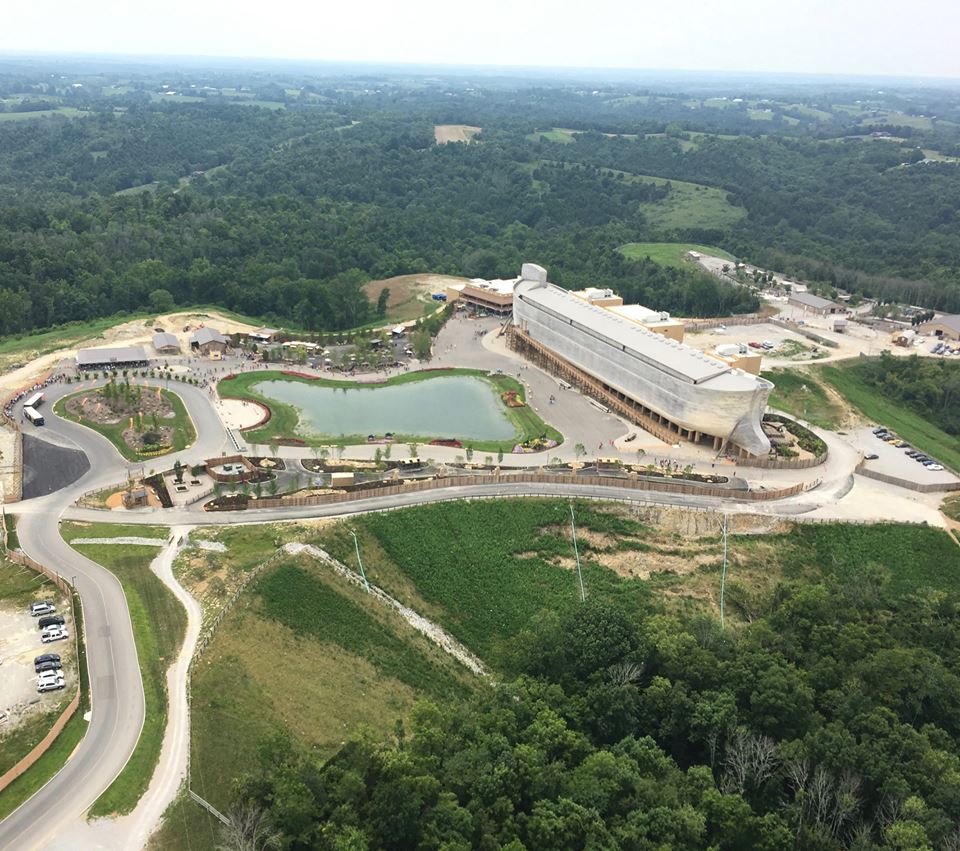 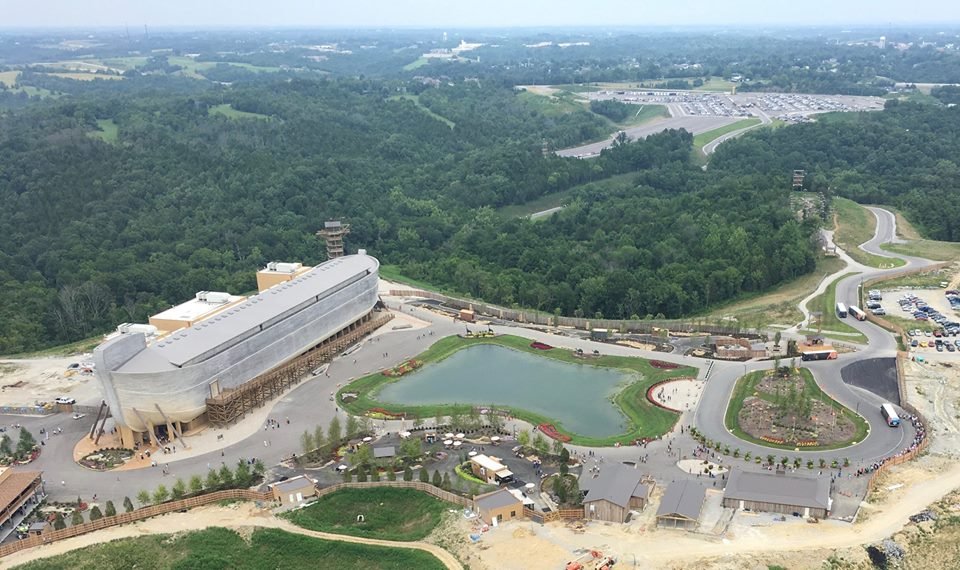 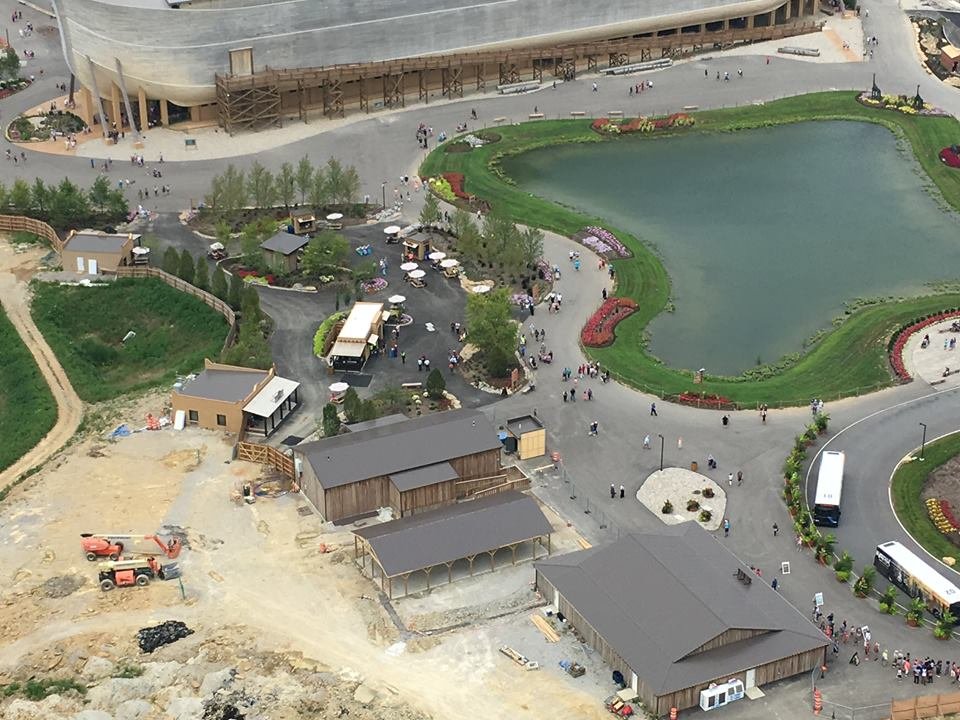 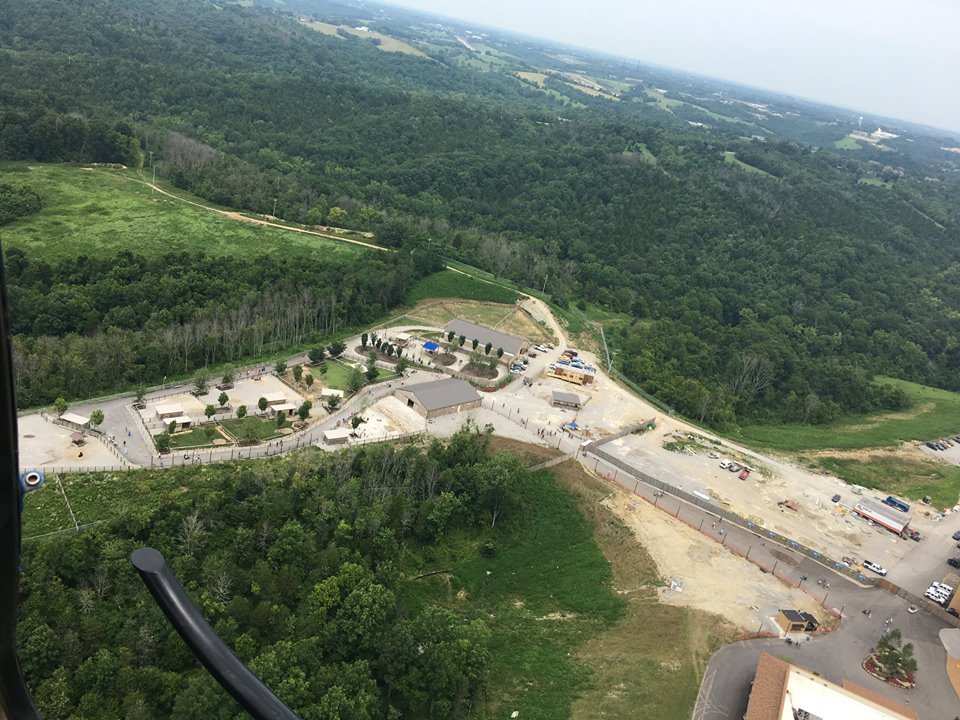 So 11,000 total at both facilities on just one day recently. Praise the Lord so many people are visiting! We continue to reach so many people from across the United States and around the world with the truth of God’s Word.

Now Dawkins explained the context of his tweets: “I have indeed strongly condemned the misogyny, homophobia, and violence of Islamism, of which Muslims—particularly Muslim women—are the prime victims. I make no apologies for denouncing those oppressive cruelties, and I will continue to do so.” You would think a left-wing group or radio station would support this view. But it shows the left’s increasing intolerance of free speech. And this incident also illustrates something else.

You see, back in 2006, Richard Dawkins published his book The God Delusion. In his book, Dawkins stated (and has used similar language in his interviews and presentations many times),

The God of the Old Testament is arguably the most unpleasant character in all fiction: jealous and proud of it; a petty, unjust, unforgiving control-freak; a vindictive, bloodthirsty ethnic cleanser; a misogynistic, homophobic, racist, infanticidal, genocidal, filicidal, pestilential, megalomaniacal, sadomasochistic, capriciously malevolent bully.

This episode illustrates something important. The same sort of situation happens in public education. If teachers in a US government school quotes the Koran or Hindu or Buddhist writings, that’s OK. But if teachers quote the Bible, they are likely to be disciplined in some way, maybe even fired.

On August 7, Richard Dawkins was interviewed by Laura Ingraham on a Fox Network TV show. The interviewer asked why the “wrath of the left is much more directed toward Christian/conservatives.” Dawkins said it’s “bizarre.” But it’s actually not that bizarre; it’s just a spiritual issue. As an atheist, Richard Dawkins doesn’t get it—but this is a very obvious illustration that this incident is a spiritual issue. (You can watch the short interview.)

My point is that there’s obviously an extreme bias growing against anything Christian in our culture.

My point is that there’s obviously an extreme bias growing against anything Christian in our culture. Why is that? Because it’s a spiritual battle, and sinful man knows that God exists. We all have an inbuilt conscience—a knowledge of right and wrong God put in our hearts (Romans chapters 1 and 2). And Romans 1 tells us that those who rebel against God "suppress the truth in unrighteousness" (Romans 1:18). It’s a reminder that those who oppose the truth of God’s Word and the gospel will do all they can to actively suppress that truth.

We’ve found that with our Creation Museum and Ark Encounter, secularists including the media are obsessed with what we are proclaiming and will do anything they can (misinform, outright lie, distort, and so on) to malign us in the hopes of taking us down. Why? Because we are Christian!