AnswersinGenesis.org the Worst Site for Science?

Answers in Genesis and Ark Encounter were both recently featured on end-of-the-year lists. One site said our website was one of the “worst websites for science” this year, and the other featured Ark Encounter as a unique part of the state of Kentucky.

AnswersinGenesis.org was featured on a list of The Worst Websites for Science in 2016. Apparently we’re “full of misleading, incorrect, or even blatantly fake information.” They write,

Formed by Young Earth Creationist Ken Ham, Answers in Genesis is an organization that espouses a literal interpretation of The Biblical creation story. Their science coverage regularly distorts and rejects modern science that counters the erroneous notion that God created the Earth less than 10,000 years ago. Frequent disciplines they target include evolutionary biology, geology, and anthropology.

Well, the good news is we were featured at the bottom of the list. So we’re apparently the best of the worst! Joking aside, it’s obvious that the person who compiled this list doesn’t understand the distinction between historical and observational science and doesn’t realize that we aren’t against “modern science”—we’re against the atheistic, naturalistic, evolutionary interpretation imposed on the evidence. Once again this illustrates the worldview clash because of different starting points—God’s Word or man’s word.

On the First Day of Christmas

The Herald-Leader staff, a Lexington-based newspaper, wrote a Kentucky-style version of the popular Christmas tune, “The Twelve Days of Christmas.” Featured in place of “a partridge in a pear tree” was “a giant ark that doesn’t really float” with a picture of the life-size Ark.

There’s even a musical version of it on their website. Now, of course, the Ark we built in Northern Kentucky doesn’t float because it had to meet building codes as a tourist attraction! So it had to have washrooms, elevators, exit stairs, and so on. Our engineers met these code requirements rather brilliantly by anchoring the structure to three giant towers. It was designed as a wooden ship but built as a building for tourists.

The real Ark, of course, really did float, as we show through various exhibits throughout the three decks of the Ark. In fact, there have been numerous wooden ships built over the years—some as large as or even larger than the Ark.

We’re thankful that when people think of what makes Kentucky unique and distinctive, they think of the life-size Noah’s Ark in Williamstown! As tourists continue to pour into the state from across the United States and all over the world, this will only continue.

Here’s a look at our new Ark Encounter television spot, playing on highly rated shows like the CBS show 60 Minutes, ION’s Blue Bloods, and the History Channel’s American Pickers and many more over the next few months. This spot is part of our “Think Bigger” campaign:

Last week we said good-bye to a great friend and long-time AiG volunteer (22 years) Marlene Sauer. As we grieve her passing (though rejoice in the eternal life she is enjoying), today we extend our deepest condolences to the family of another faithful volunteer, Carol Funch. Carol was a museum staff member when we opened nine years ago, and later became a faithful volunteer. In fact, she volunteered at our recent Christmas Town event. 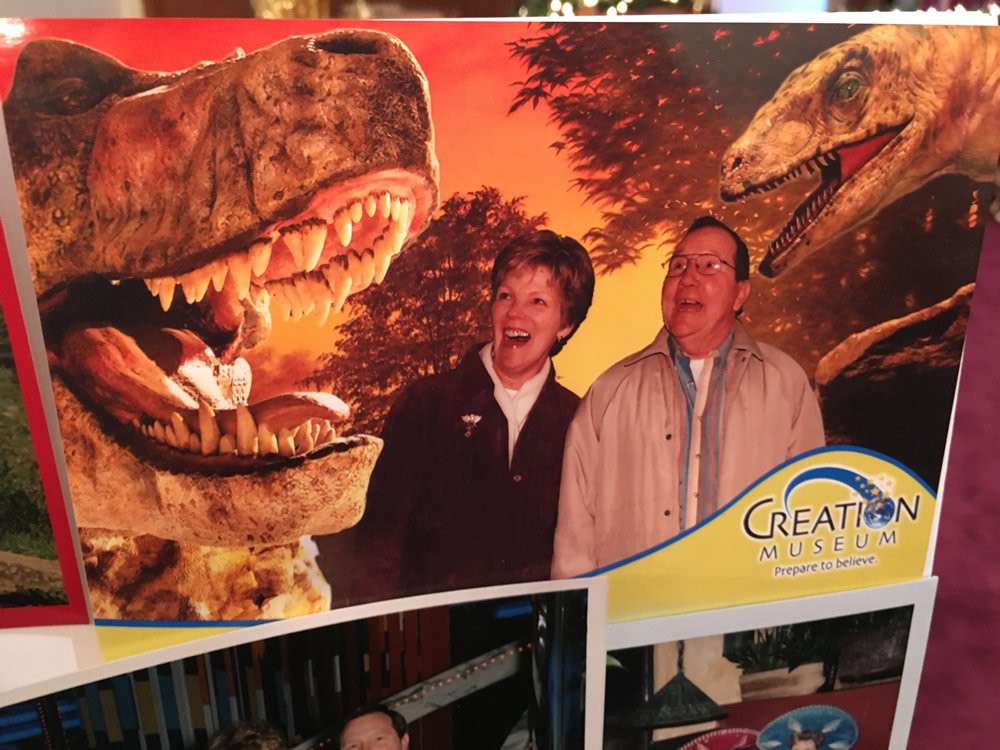 Sadly, Carol suffered a stroke, and she too passed away into glory, at age 73. In this photo (which was on display at her memorial service), she is seen with husband Don at the Creation Museum. Carol also leaves behind a son and daughter. She was a wonderful blessing to us all; I would often see her volunteering at special banquets, concerts, and other events at the museum. Please pray for the Funch family.