Rainbow Lights at the Ark

Our special Christmas event at the Ark Encounter started on Friday, December 16. We’ve decorated the whole Ark property, including Emzara’s Kitchen (our restaurant with lunch and dinner buffets), Ararat Ridge Zoo, and around the lake with beautiful Christmas lights. And, for added “wow factor,” we’ve lit the whole Ark in beautiful rainbow colors. It’s gorgeous at night! 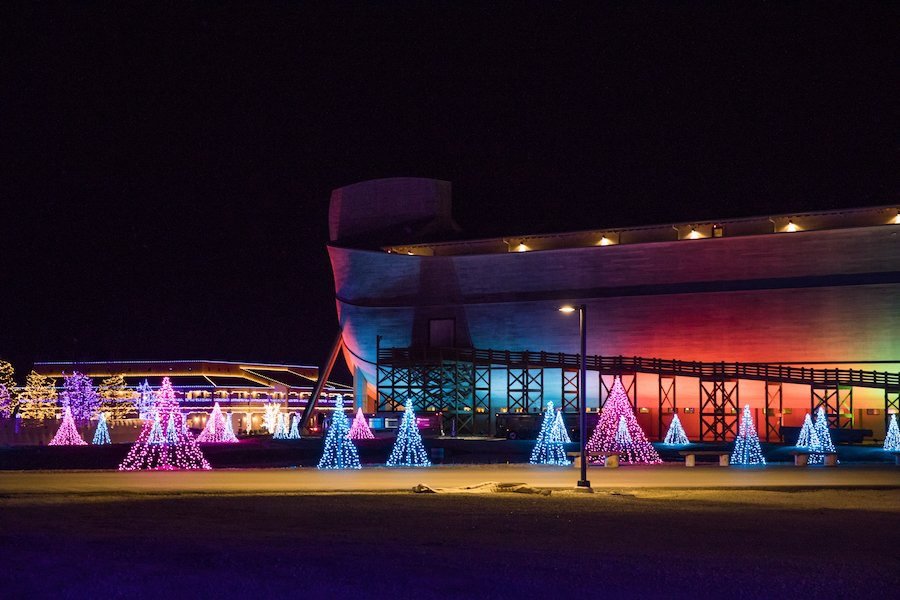 Now most people even vaguely familiar with the Genesis Flood account know the rainbow is associated with the Ark. After the Flood, God made a covenant with Noah, his family, their descendants, and the living creatures on the Ark.

And as for Me, behold, I establish My covenant with you and with your descendants after you, and with every living creature that is with you: the birds, the cattle, and every beast of the earth with you, of all that go out of the ark, every beast of the earth. Thus I establish My covenant with you: Never again shall all flesh be cut off by the waters of the flood; never again shall there be a flood to destroy the earth (Genesis 9:9–11).

The sign of this covenant was the rainbow. Even today the rainbow represents the “everlasting covenant between God and every living creature of all flesh that is on the earth” (Genesis 9:16).

The rainbow stands as a poignant reminder that God keeps His promises. Despite the wickedness in the world, God has not sent another global Flood to destroy all flesh.

Interestingly, if the Flood of Noah’s day was just a local flood like many Christians sadly believe and teach, God has broken His promise time and time again. Since the time of Noah, there have been numerous local floods—some of them very devastating to human and animal life. But there’s never been another global Flood because God keeps His promises. Now, there will be another global judgment—but it will be by fire next time (2 Peter 3:10) as outlined below.

Taking the Rainbow Back!

In recent times the rainbow (albeit with some different colors) has come to represent something far different. To many people it means freedom, love, pride, a new era, and, specifically, the LGBTQ movement. Indeed when the US Supreme Court legalized gay “marriage” last year, the White House was lit up in rainbow colors and released a statement saying,

Tonight, the White House was lit to demonstrate our unwavering commitment to progress and equality, here in America and around the world. . . . The pride colors reflect the diversity of the LGBT community, and tonight, these colors celebrate a new chapter in the history of American civil rights.

But the rainbow itself wasn’t designed to be a symbol of freedom, love, pride, or the LGBTQ movement. God created this beautiful, colorful phenomenon and designated it as a sign of His covenant with Noah and his descendants forever.

Sadly, people ignore what God intended the rainbow to represent and proudly wave rainbow-colored flags in defiance of God’s command and design for marriage. Because of this, many Christians shy away from using the rainbow colors. But the rainbow was a symbol of God’s promises before the LGBTQ movement—and will continue to be after that movement has ended. As Christians, we need to take the rainbow back and teach our young people its true meaning.

Although God promised He would never judge the earth with a global Flood again, He is coming to judge sinful mankind a second time. And Jesus specifically compares this coming judgment to the Flood.

And as it was in the days of Noah, so it will be also in the days of the Son of Man: They ate, they drank, they married wives, they were given in marriage, until the day that Noah entered the ark, and the flood came and destroyed them all. . . . Even so will it be in the day when the Son of Man is revealed (Luke 17:26–27, 30).

Knowing this first: that scoffers will come in the last days, walking according to their own lusts, and saying, “Where is the promise of His coming? For since the fathers fell asleep, all things continue as they were from the beginning of creation.” For this they willfully forget: that by the word of God the heavens were of old, and the earth standing out of water and in the water, by which the world that then existed perished, being flooded with water. But the heavens and the earth which are now preserved by the same word, are reserved for fire until the day of judgment and perdition of ungodly men. (2 Peter 3:3–7).

Just as the Flood was a real judgment by God, this coming judgment is also real. But there is a way to escape it. Jesus Christ came as the God-man, fully God and fully man, to take the penalty for sin—death—upon Himself. Because of His death and Resurrection, we can have our sins forgiven by submitting ourselves to Christ and declaring Him Lord of our lives (Romans 10:9). Those who have placed their faith and trust in Christ have no fear of judgment but instead are part of those who can say:

Nevertheless, we, according to His promise, look for new heavens and a new earth in which righteousness dwells. (2 Peter 3:13).

Learn more about the good news of the gospel on our website.

Plan your visit to the Ark Encounter here in Northern Kentucky to see these beautiful lights and to take advantage of special pricing this month (after 5 p.m.) at ArkEncounter.com/christmas. 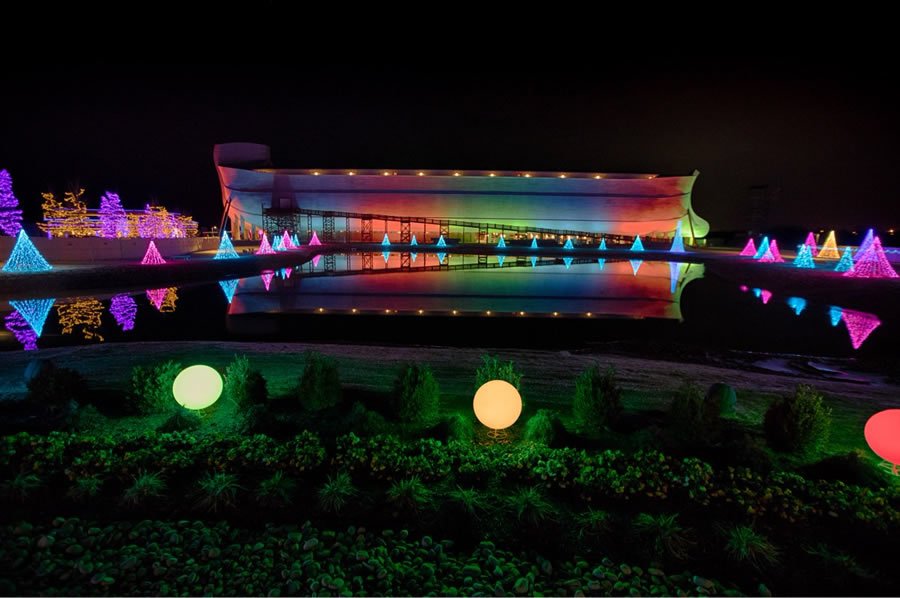