“Amazing” and “Beyond My Expectations”

The life-size Ark has been open over two months, and we have been highly pleased not only with the great attendance (watch this recent TV report), but also with the number of high-profile people who have toured. Even though he does not accept the historicity of the book of Genesis, former President and Nobel-Prize-winner Jimmy Carter walked through the Ark with me before it opened to the public (see “President Jimmy Carter Tours Ark Encounter.”) And Bill Nye “the Science Guy” came during opening week and “debated” me (again); as we walked among the exhibits, his camera crew recorded Mr. Nye challenging me along the way.

Also, at least two congressmen have visited the Ark. The latest, Congressman Thomas Massie (who represents our region of Northern Kentucky in Washington, DC), walked through the Ark with me last Friday. Elected officials of any party and worldview are encouraged to visit the Ark and be exposed to its biblical truths.

Elected officials of any party and worldview are encouraged to visit the Ark and be exposed to its biblical truths.

In describing the Ark, Congressman Massie used a word we are hearing most often from our guests about the 510-foot-long ship: “amazing.” He added that the massive Ark “exceeded my expectations,” a phrase we also get from many of our guests.

We discussed the previous state administration’s hostility toward the Ark that led to a lawsuit. I quickly noted to Congressman Massie that under Kentucky's new governor, Matt Bevin, there has been a refreshing change in Frankfort.

Congressman Massie asked me about the attendance at the Ark. I answered that we are already around 300,000 visitors for the first two months. Now keep in mind that 325,000 people was the estimated attendance by a state-hired research group (though we had to pay tens of thousands of dollars for the research) for the entire first year! We’ll surpass 325,000 in under three months. This research group, however, did not do a detailed, consumer-based, general population study, as opposed to the study we conducted through our own consultants, America’s Research Group (ARG), so we knew the state’s 325,000 figure was very low. ARG has estimated that somewhere between 1.4–2.2 million people would visit the Ark in year one, and we are confident of that range. Furthermore, ARG says that because the Ark opened in July this summer and missed several weeks of the vacation season, it predicts that year two will see even higher attendance than our first year.

By the way, former state officials and secular media and bloggers (e.g., this Americans United blog post) have been doubting the attendance estimate by ARG, even though ARG’s study was far more exhaustive (utilizing primary source research) than the state-commissioned one. Still, one anti-Ark blogger once had a headline about the difference between the state’s 325,000 figure and ARG’s 1.4–2.2 million range for year one: “Ark officials [are] still lying about attendance numbers.” Now, how could we possibly lie right now about something that will be determined in 2017 after one year of operation?

The Ark has already drawn 300,000 visitors in just two months.

Previous state officials stood by the 325,000 scenario of its consultants, wrongly predicting that if the public saw the Ark as "more religious-focused” than just being a historically themed attraction, the Ark would attract just 325,000 visitors in its first year. In other words, if the Ark were less religious, we would see much more than 325,000 guests. Well, the Ark is more than “religious-focused”: it is highly evangelistic about our Christian faith. Still, contrary to the state’s study, the Ark has already drawn 300,000 visitors in just two months.

As we have yet to experience a full, busy summer (we opened in July), we don’t know what the first-year attendance will be. But AiG predicts that even though we “lost” the month of June, we will be within the 1.4–2.2 million range, and probably closer to the higher end.

Thankfully, the state-sponsored report, even with its remarkably low estimate of 325,000 visitors the first year (think about it: the Creation Museum had over 400,000 visitors in year one), indicated that the Ark project still fulfilled the state requirements to receive a future tax incentive for tourist attractions. Yet while the Ark Encounter qualified, the state tried to find other ways to deny the incentive. Praise God, a federal judge ruled this year that state officials like former Governor Beshear acted unconstitutionally and denied our constitutional rights. Soon after, the incentive was approved.

Here is a photo of Congressman Massie, some of his staff, and me at the bow of the Ark on Friday: 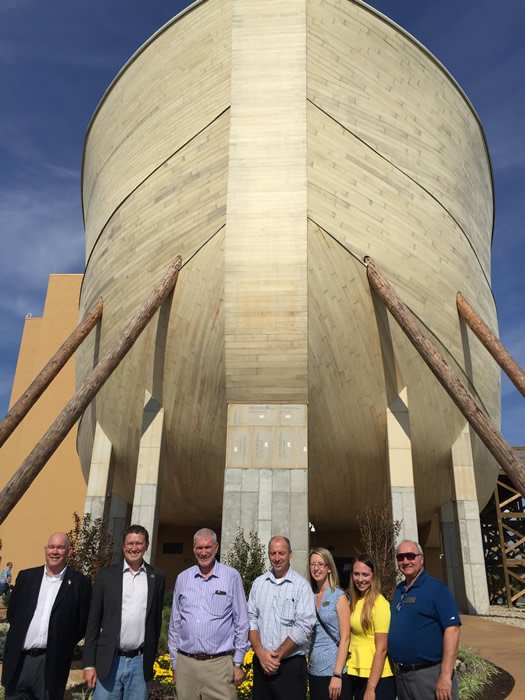