Yesterday, CNN anchor and reporter Carol Costello (known for her unashamedly liberal positions in regard to politics and religion) reported on our Ark Encounter project. Last month she traveled to Kentucky with her producer and videographer to tour the life-size Ark and interview me. We are grateful for the national stories, which included words like “remarkable” and “awe inspiring” to describe the Ark. 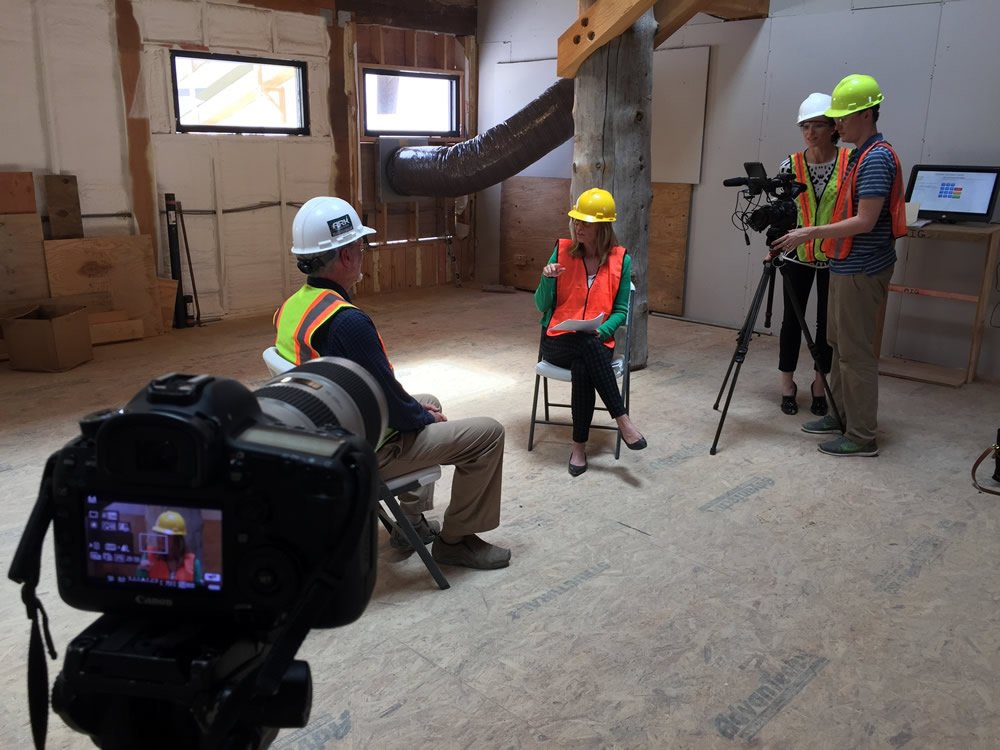 In the video report (and the associated opinion piece she wrote), Costello interviewed Bob Fox, pastor of Faith Baptist Church in Georgetown, Kentucky (about 30 miles from the Ark site).

What CNN Ignored in Its Church vs State Claim

Here is what CNN did not mention in its stories this week. On January 25, a federal judge issued a preliminary injunction against the state of Kentucky for unlawfully blocking AiG’s participation in a rebate incentive for the Ark. The federal court found that the state’s “exclusion of AiG from participating in the program for the reasons stated—i.e., on the basis of AiG’s religious beliefs, purpose, mission, message, or conduct, is a violation of AiG’s rights under the First Amendment to the federal Constitution.” The judge ordered the state to move forward in processing AiG’s application for the available tax rebate incentives that would become effective after the Ark is operational, and in April the rebate was granted by the state.

The decision also upheld AiG’s right to religious preferences in hiring, declaring that AiG may “utilize any Title VII exception [of the 1964 Civil Rights Act] for which it qualifies concerning the hiring of its personnel” as a religious organization.

In his interview with CNN, Pastor Fox bemoaned AiG receiving the performance-based tourism sales tax incentive, claiming it goes against the “separation of church and state.”

In the opinion piece under the video, Costello stated the following:

Pastor Bob Fox, a Baptist minister—and Kentucky taxpayer—is outraged. He sees Ham’s fundraising methods, as many others do, to be a violation of the First Amendment and laws that require separation of church and state. “These tax incentives are intended to be neutral and not to support one view or another,” Fox told me. “It’s clear that the Ark Park is not a neutral event.”

Perhaps Pastor Fox hasn’t read the First Amendment in a while. It guarantees the “freedom of religion” and “free exercise” of religion in this nation (and of course the phrase “separation of church and state” does not appear in the Constitution). No religious group of people can be treated as second-class citizens. Christians, Jews, Muslims, secularists, and Hindu citizens all pay taxes—all such religious groups are to be given the right to free exercise of religion and to be treated equally by the law. That’s why the federal judge in January ruled that the Ark Encounter had every right under the law and the First Amendment to receive the tourism sales tax rebate incentive offered to any facility that fulfilled the requirements to bring significant net tourist dollars into Kentucky. The Ark Encounter fulfilled those requirements as determined by the State’s own consultants. As the judge ruled, Ark Encounter could not be denied those incentives just because it has a Christian message. (See the sidebar for more information on that important federal ruling, which CNN did not mention.)

Pastor Fox is reported as stating,

These tax incentives are intended to be neutral and not to support one view or another.

And you know what? He’s absolutely right. That’s what the judge stated and our attorneys claimed in our lawsuit. The tourism tax incentive is a facially neutral program. And that’s the whole point! It can’t be offered to all groups except Christians, as the judge ruled! If it’s offered as a “neutral” program (and it is), then it has to be made available to all groups. The government can’t discriminate against a particular viewpoint if the facility fulfills the requirements of rules of the tax incentive program for tourism, which the Ark project did.

As the judge stated, the government can’t discriminate against Christians applying to participate in a facially neutral rebate program.

Pastor Fox also stated, “It’s clear that the Ark Park is not a neutral event.” He’s correct on that point too! That’s also what the judge acknowledged in his ruling. The Ark Encounter is an overtly Christian facility—AiG has never hidden that. But again, as the judge stated, the government can’t discriminate against Christians applying to participate in a facially neutral rebate program. It’s sad that Pastor Fox seems to miss a very important point and may be ignorant of the federal ruling in January!

Also, here is an inconsistency of the pastor that is so glaring: as Pastor Fox spoke against the Ark project being able to receive the facially neutral, performance-based tourism tax incentive, he added: “I believe as a Baptist in the separation of church and state. . . .” Then, in a bizarre, illogical comparison, he compared our situation with Muslim Sharia law!

Keep in mind that the 600 members of Fox’s Baptist church can (and no doubt) receive a tax deduction for their offerings given to his church. All churches, by law, are granted the same rights as a 501(c)(3) organization (which AiG is). In other words, the church is benefiting financially by the government because money the government would normally receive in taxes goes to the church instead. That’s the nature of a tax-deductible donation. Not only this, but unlike AiG, a church like Pastor Fox’s doesn’t have to apply for 501(c)(3) status, is not required to file annual returns, and is not subject to automatic revocation of its tax-exempt status if it doesn’t file. Here is what the IRS states, on its website:

Churches (including integrated auxiliaries and conventions or associations of churches) that meet the requirements of section 501(c)(3) of the Internal Revenue Code are automatically considered tax exempt and are not required to apply for and obtain recognition of exempt status from the IRS. Donors are allowed to claim a charitable deduction for donations to a church that meets the section 501(c)(3) requirements even though the church has neither sought nor received IRS recognition that it is tax exempt. In addition, because churches and certain other religious organizations are not required to file an annual return or notice with the IRS, they are not subject to automatic revocation of exemption for failure to file. See Annual Return Filing Exceptions for a complete list of organizations that are not required to file.1

Actually, AiG/Ark Encounter is held to a higher standard by the government than Pastor Fox’s church! So while this pastor states that the Ark Encounter should not be allowed to apply for and receive a benefit from the government, his church receives it automatically!

Also, for the Ark Encounter to receive the tourism sales tax rebate, it had to be shown that the attraction would bring significant tourism dollars into the state and have a great economic impact. An outside consultant determined that at minimum attendance levels, over 10 years, the Ark (a sister attraction of the popular Creation Museum) would bring around $4 billion dollars into the state and create up to 20,000 associated jobs in the area. A church does not have to have any such economic impact to receive its tax-deductible benefit.

Pastor Bob Fox should be thankful that the Ark Encounter is going to positively impact the state in which he lives and in his backyard.

In reality, Pastor Bob Fox should be thankful that the Ark Encounter is going to positively impact the state in which he lives and in his backyard. The Ark will create jobs, and all the dollars that will flow into the state treasury because of the Ark will lessen his tax burden.

Pastor Fox makes the point that as a Kentucky “tax payer,” he objects to the tax incentive granted the Ark project. I want to assure him that not ONE cent of his tax money has been used in building the Ark. The Ark has been totally privately funded! The sales tax rebate doesn’t even start kicking in until after a year of operation, and it’s only a rebate of sales tax paid within the Ark facility by those who choose to visit it. Contrary to Costello’s claim in her opinion piece, the state of Kentucky will not be “forcing taxpayers—whatever their religious beliefs—to partially fund Ham’s Ark.” No unwilling taxpayers will see their dollars go to the Ark. Unless Ark critics visit the Ark and pay sales tax, they are not paying anything toward the Ark Encounter. Moreover, the tax burden of all Kentuckians will be eased because of the Ark’s presence in their state and the related tourism dollars that it will bring into the state’s coffers.

Regardless of the opinions of Pastor Fox and CNN’s Costello about our eligibility to receive the sales tax rebate, a federal court has already ruled. We are very surprised that in the two reports, CNN did not mention this important court ruling in our favor. A federal judge has settled the church/state matter (Kentucky is not appealing the decision), despite the protests of Fox and Costello. I trust that CNN will insert this court ruling as an addendum to its web commentary.

So if Pastor Fox doesn’t want any of his money going to the Ark, he should not visit and pay the ticket price to get in. At the same time, I would personally welcome the opportunity to take Pastor Fox on a tour of the Ark, as my guest. I would trust that after such a visit, he might rejoice that such a facility, one that honors God’s Word and lovingly presents the gospel message, is just a 30-minute drive from his church.

Given the Ark’s massive economic boost, job creation, and public proclamation of the truth of God’s Word and the gospel, I would think anyone, pastor or not, would be thankful for the impact of the Ark Encounter and how it has been a recent symbol of the religious freedoms we should enjoy in the United States.

What we are doing at the Ark Encounter can be summed up by the words of Jesus: “Go into all the world and preach the gospel to every creature” (Mark 16:15).