Bill Nye Called Who “the Messiah”?

During a recent interview at the Ark Encounter construction site, I was quite taken aback when a TV reporter with Channel 7 Australia, a major network in my homeland, asked me on camera if I was a messiah!

Since that time I have kept wondering why he would ask such a bizarre question. I’ve never in my life been asked anything like that. The Messiah is our Creator and our Savior, Jesus Christ (Colossians 1).

But I just discovered why the reporter asked his question.

Watch this trailer that is advertising the Channel 7 program Sunday Night that will air on Australian national television this coming Sunday evening, and you’ll find out why the reporter posed the question.

Before heading to Kentucky to interview me, the reporter, or someone on his team, apparently interviewed Bill Nye “the Science Guy” of TV fame who debated me two years ago (the producer of Sunday Night lives in Southern California and so does Nye.) And Nye told the TV crew on camera that, concerning me, “his followers believe that he’s the Messiah.”

Before I comment on that incredibly blasphemous statement (and I wait to see the full TV program this weekend to get more of a context as to why Nye said that), I want to offer an observation: I believe Bill Nye is under conviction concerning his atheistic views. After my evolution/creation debate with him in 2014, I really believe he was unsettled by the fact that I pointed out that the real debate was a clash of two worldviews and that I had presented the gospel message clearly. Our debate strategy was not that I could convince Nye with sound scientific arguments, although they were presented, but to share the power of God’s Word and the gospel, for “faith comes by hearing, and hearing by the Word of God” (Roman 10:17). Nye’s secular worldview is based on the foundation that autonomous man determines “truth,” whereas my worldview is based on the foundation of the absolute authority of God’s Word.

Nye is one of the featured speakers at next month’s Reason Rally in Washington, DC—advertised on Google as the "world's largest atheist party."

Is Nye an atheist? When asked on a HuffPost video whether he believed in God, Nye answered, “No. ” He then added that he "can’t know" for sure, so the word agnostic is what he may prefer to call himself. But in our debate, Nye made it quite clear that he believed the entire universe and life came into existence by natural processes. And because naturalism is atheism, I would argue that his beliefs are more of those of an atheist. As a result, some people are now realizing that he is really “Bill Nye the evolution guy” or “Bill Nye the atheist guy.”

From a biblical perspective, we shouldn’t be surprised at the opposition from those anti-Christians like Nye who reject the God of creation. After all, Jesus said, “He who is not with Me is against Me, and he who does not gather with Me scatters abroad” (Matthew 12:30).

Since Bill Nye is not for Christ (and he is not for the Messiah), he is anti-Messiah and anti-Christ.

Again, I have no idea how Nye’s Messiah statement will come across in the context of the entire Channel 7 program. The reporter asked me lots of questions about God’s Word and the gospel, and if the lengthy program uses my own words about Christ and the gospel, viewers will quickly see what a ridiculous accusation Bill Nye made. I have asked many of our staff members if they had ever heard any AiG supporter refer or allude to me as something like a messiah, and of course they have never heard such a thing. The foundation of the AiG ministry is the belief that Jesus Christ is the Messiah and the Savior of the world, and Mr. Nye, who heard me present Christ’s gospel message during our debate, knows what we believe.

By the way, I found the Australian TV crew to be very friendly and professional (although the reporter’s messiah question certainly had me wondering), and I trust their finished program will do a lot to let people in my homeland know about the evangelistic Ark Encounter attraction that opens July 7. It will be one of the greatest Christian outreaches of our era. The Ark Encounter is a world-class themed attraction featuring a life-size Noah’s Ark. The Ark will be the biggest timber-frame structure in the world and is already attracting considerable international interest: next week, media representatives from Norway and Poland will be in town to interview us. Research indicates that up to two million people a year will visit this attraction—Christians and non-Christians. 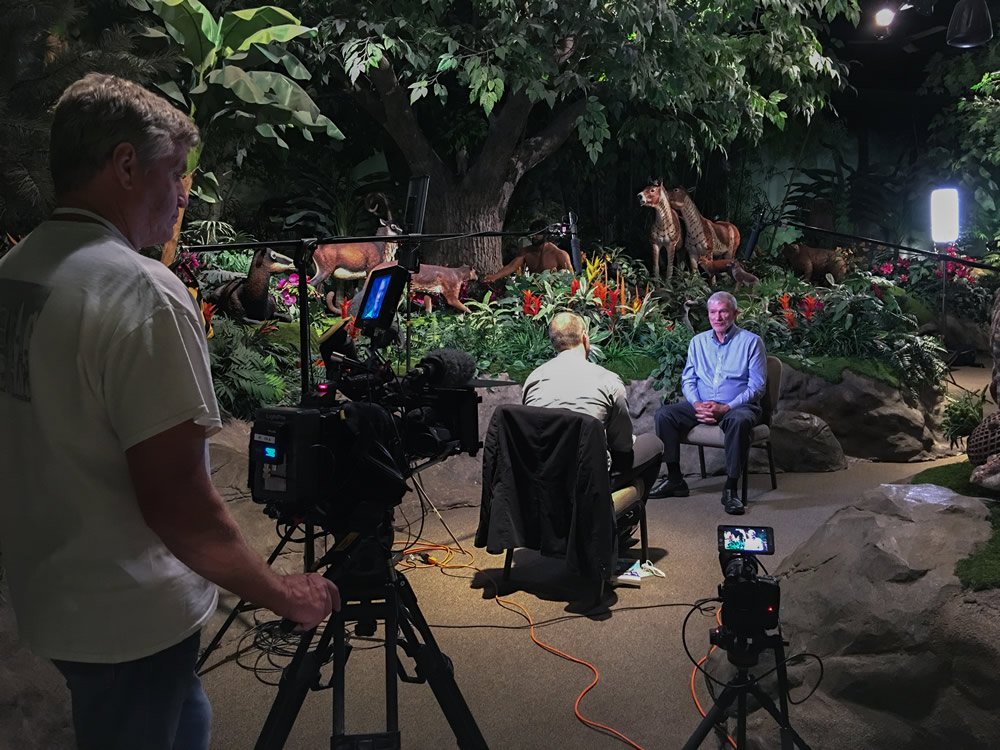 Ken Ham being interviewed by Channel 7 Australia inside the Creation Museum earlier this month.

Ultimately, here’s what Bill Nye really needs to know about the Messiah:

For there is one God and one Mediator between God and men, the Man Christ Jesus. (1 Timothy 2:5)

Find out more about the Ark Encounter at ArkEncounter.com.