Aliens on Other Planets? They’re at the Creation Museum

Many evolutionary scientists are desperate to answer the question “Are we alone in the universe?” with a resounding “No!” But so far all their research has not pointed to the possibility of any extraterrestrial life. Of course, this lack of life beyond Earth is exactly what we would expect in a biblical worldview. God created Earth to be inhabited (Isaiah 45:18), and Earth is the center of His attention. It’s where He sent His one and only Son to die for the salvation of Adam’s descendants (John 3:16). So Earth isn’t just one among many planets—it’s special and uniquely created. We should expect Earth to uniquely hold life.

Now, since evolutionists start from a completely different starting point on such topics—the idea that all of life evolved naturalistically—they reach an entirely different opinion on aliens. Many evolutionists believe that life exists in outer space because, in their view, Earth can’t be unique. It just happened to evolve life, and if our planet did, then surely many other planets did too. That’s why evolutionary scientists spend so much time and money searching for alien life—they are desperate to escape the conclusion that Earth is unique because this supports a biblical, Creator-based worldview and not an evolutionary one.

Well, as we and other creationists predicted about the pointless search for life, “a study that surveyed 93 galaxies yielded no evidence of advanced alien civilizations.” “The study, led by Michael Garrett of the University of Leiden in the Netherlands, did not find any sign of waste energy in the galaxies the research covered, indicating that intelligent alien life is rare, if not nonexistent,” reported Christianity Today. Garrett is reportedly not giving up on his search for extraterrestrial life, but his research so far has turned up nothing and suggests that “intelligent alien life is rare, if not nonexistent.” Of course, while this might be a surprise to many evolutionists, it’s no surprise to those who start with God’s Word. It’s exactly what we expect and predict.

Although there are no aliens, we are not actually alone in the universe. We can have fellowship and a relationship with the God and Creator of the universe. You see, we aren’t alone—we have a Creator and were specially crafted in His image. Instead of seeking out non-existent aliens, evolutionary scientists—and everyone else—should turn to the God who is not far away from any of us (Acts 17:27) and put our faith and trust in Him (John 3:16). 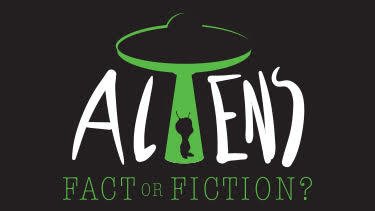 Come to the Creation Museum and watch the brand new planetarium show Aliens: Fact or Fiction? in the Stargazer’s Planetarium.

Do you want to learn more about the question of alien life? Well, for the month of October, there has been an alien invasion at the Creation Museum. Our brand-new planetarium show, Aliens: Fact or Fiction?, features a biblical answer to the question of extraterrestrial life. When you and your family visit the Creation Museum during October you’ll discover Area 51 1/2—the Stargazer’s Planetarium. Those who dress up as an alien get a free ticket to the planetarium show—that’s a $7.95 value! And kids are free at the museum with a paying adult—and that’s in addition to our 2 Buy 2 (buy 2, get 2 free) promotion for 2015. While supplies last, each family will also receive a free copy of astronomer Dr. Jason Lisle’s booklet about ETs and UFOs. October is a great month to visit the Creation Museum (and our beautiful gardens) with your whole family and become equipped to answer the skeptical questions of this age.