The famous Smithsonian in Washington, DC, is sending a new traveling exhibit across the United States. This exhibit, taken from the David H. Koch Hall of Human Origins in the National Museum of Natural History, located in Washington, DC, is called “Exploring Human Origins: What Does It Mean to Be Human?” Apparently the director hopes that this exhibit will “spark a respectful and positive conversation across the country about what it means to be human and inspire people to contemplate their place in the natural world.” The Smithsonian reports the exhibit “will highlight key milestones in the journey of human evolution and explain how they developed over time, including walking upright, the earliest known technologies, brain enlargement, symbolic language development, the origin of agriculture and the creation of complex societies.” 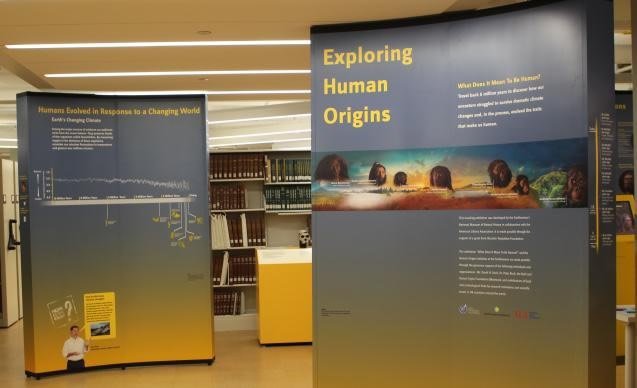 Images reproduced from the Smithsonian.

But the bottom line is this: This is nothing but a propaganda campaign attempting to indoctrinate people to believe they are nothing but animals evolved from ape-like ancestors! To the Smithsonian, that’s what it means to be human! And what they are doing in reality is trying to impose their religion of naturalism (atheism) on the culture. Interestingly, in complementing community events, they also plan to have some people (who come from liberal backgrounds) supposedly representing the religious community. Of course, the entire exhibit is religious—it is promoting the religion of atheism using evolutionary beliefs. And for this exhibit, there are special invitations for clergy to try to influence them! 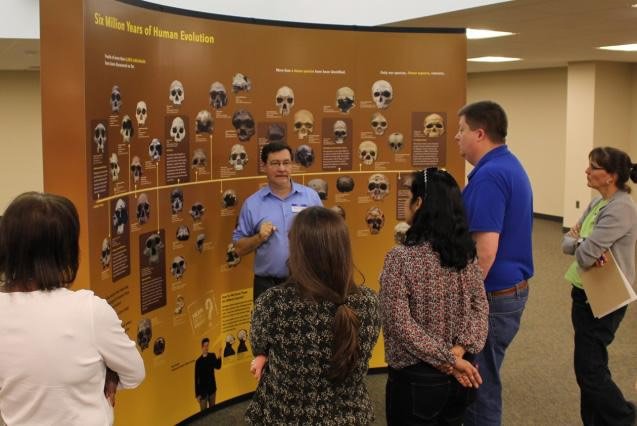 This exhibit, visiting 19 libraries between spring 2015 and spring 2017, is, as the name suggests, full of atheistic evolutionary content. In answering the question “What does it mean to be human?,” this exhibit presents only the evolutionary view that we are the result of millions of years of evolution from ape-like ancestors. In this worldview, there really is only one answer to this question—humans are nothing more than highly evolved animals. It is nothing but an anti-God campaign.

Illustrations from the Exhibit 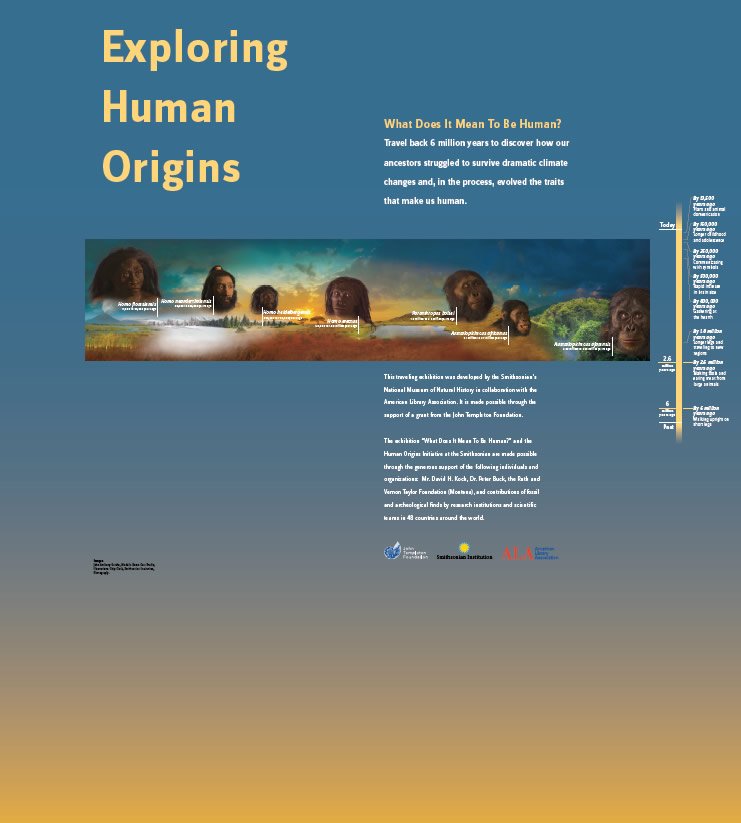 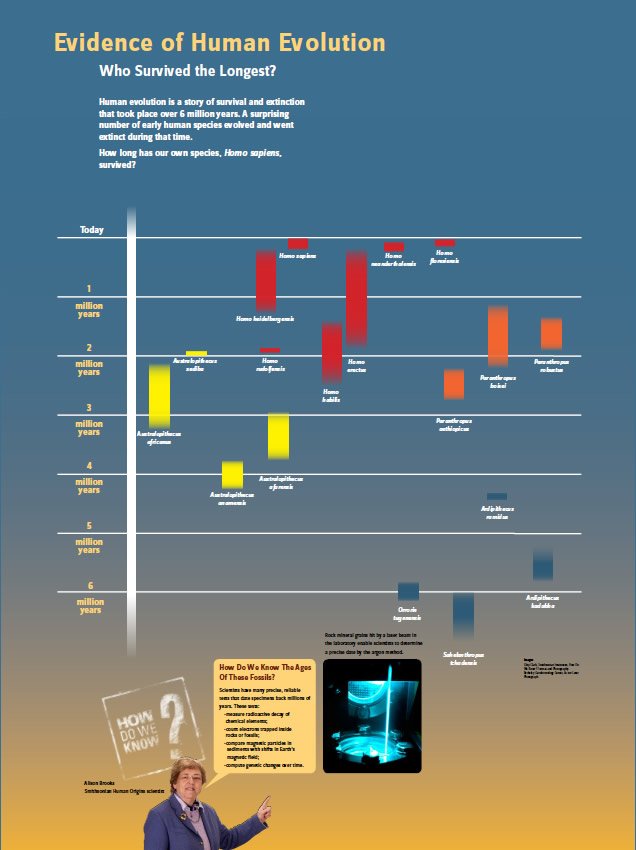 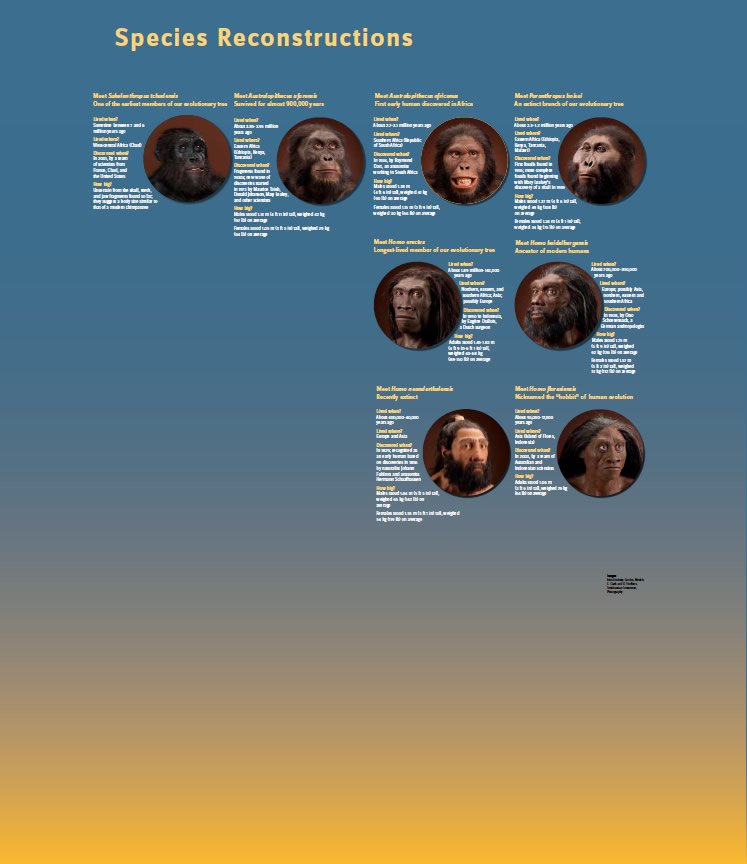 Note the subtle indoctrination in the artist’s rendering of supposed reconstructions—the artist(s) makes those creatures that are obviously ape look very human like by the way their eyes and so on are portrayed. Then the skulls that are obviously humans are made to look somewhat ape like. 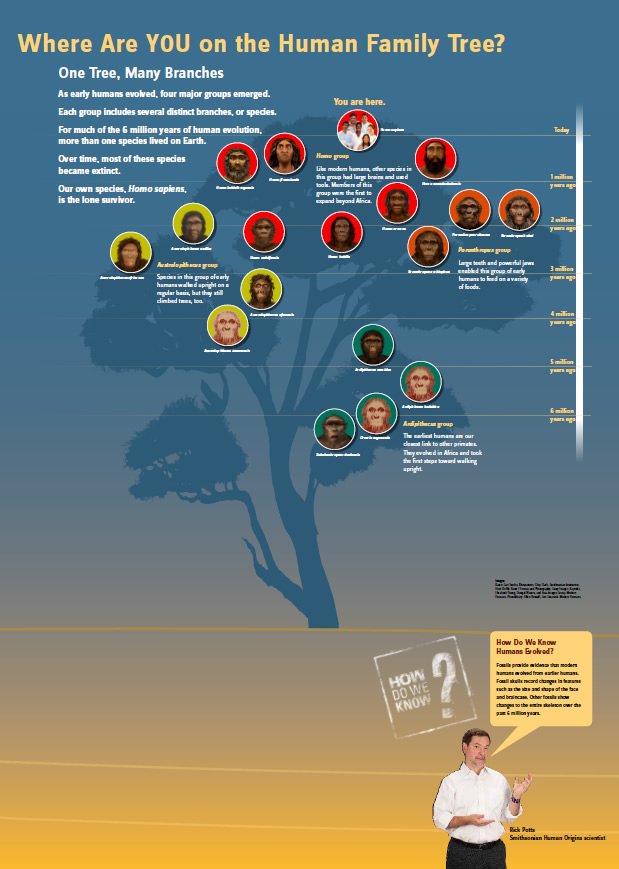 So “where are you on the human family tree?” Well, you are the lone survivor of this supposed evolutionary process. Note the pictures of all your “relatives.” Yes, you are just an animal and just happen to be the lone survivor of this process of naturalistic evolution. You are nothing but an animal—there is no purpose and meaning in life except what you make of it while you live. Once you die, you won’t know you ever existed. 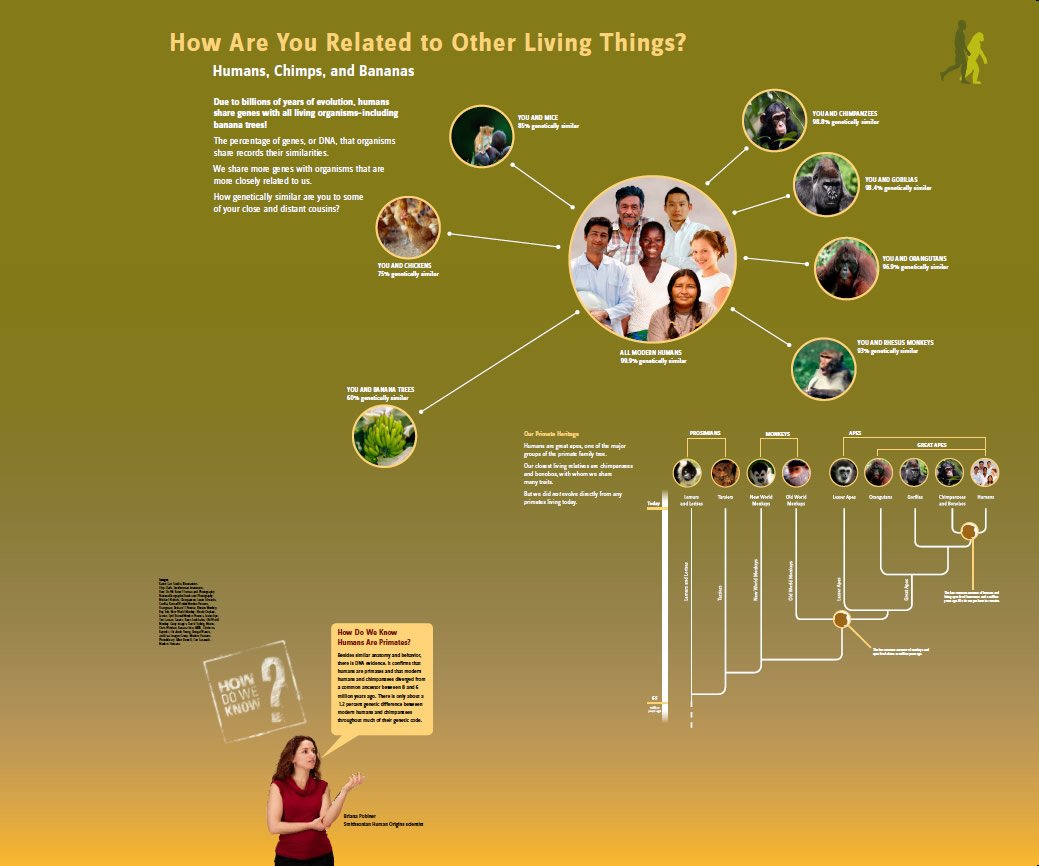 In this panel, the families that read this are told how humans are related to banana trees, chickens, mice, and chimps.

There is so much that could be said about all the panels. But I just included these five to give you a bit of a feel for this well-funded atheistic evolutionary propaganda machine that is now traveling between 19 libraries across the United States indoctrinating parents and children in the religion of atheism.

What Does It Really Mean to Be Human?

Now, the exhibit reportedly “will be complemented by community events that invite conversations with clergy, civic leaders and the public to consider how scientific discoveries about human origins may relate to diverse cultural and religious perspectives on what it means to be human.” So what are some scientific discoveries that might help us answer the question of what it means to be human? Actually, this exhibit promotes man’s fallible interpretation of evidence instead of real observational science. Imagine if this exhibit told the truth and explained discoveries like the mapping of the human genome in 2000 that showed that there is only one race: the human race. This defied evolutionary predictions. Or what about the increasing evidence that Neanderthals were not subhuman brutes but were intelligent human beings, just like us? Again, this defied evolutionary expectations. Or what about the lack of evidence for human evolution? This confirms God’s Word, not evolutionary ideas about the past. You see, the evidence confirms God’s Word—we were specially created by God from the beginning and made in His very image (Genesis 1:27). You can learn about the biblical perspective of some of the topics addressed in these exhibit presentations here. So what does it mean to be human? It means being made by God in His image—and that humans have a problem called sin and need the solution in the saving gospel message.

What Can We Do?

If this exhibit is coming to a library near you (you can see a list of towns the exhibit is visiting here), I encourage you to ask your local library if you can present an alternate view of human origins. The director claims that this exhibit is intended to “spark a respectful and positive conversation,” so perhaps the hosting libraries would be willing to allow an alternative—special creation—to be presented. After all, it’s creation—not evolution—that is confirmed by the evidence and that gives human beings worth and dignity as beings created in God’s image. However, we suspect that openness to biblical creation at these events won’t happen, as evolutionists have indoctrinated people to think that believing they evolved from ape-like ancestors and further back from some primeval soup is “science,” but believing in God is religion! But it’s not about science versus religion, but an anti-God religion versus the true religion of Christianity.

By the way, Answers in Genesis shares the true importance of understanding “What it does mean to be human?” at the Creation Museum:

Now, the John Templeton Foundation and the Peter Buck Human Origins Fund provided funding for this traveling exhibit. In 2010, Buck donated $15 million “to fund ongoing research of humanity's origins and to begin new education programs tied to the exhibit.” Apparently some of that 2010 donation was used to fund this traveling exhibit as well as ongoing programs related to the David H. Koch Hall of Human Origins. Now, I’ve mentioned the other donor, the John Templeton Foundation, several times before in my blog. This foundation has previously donated funds to groups that heavily promote evolutionary teaching to pastors, Christian teachers, and other clergy, such as the compromising BioLogos organization. They aggressively try to get Christians to accept evolutionary ideas.

So several million dollars is likely being spent on this traveling exhibit that will promote the lie of evolution to thousands of people, including many clergy. This exhibit merely indoctrinates more people into the belief that humans are just the product of millions of years of natural processes. This is why it’s so vital that we get the truth out there! Evolutionists spend millions promoting their beliefs about the past and their anti-God religion; and, sadly, many will never hear the truth—they were specially created in God’s image!

We are working to proclaim the truth concerning our origins through the ministry of Answers in Genesis, the Creation Museum, and the coming Ark Encounter. The life-size Ark project will show millions of people that God’s Word can be trusted and will graciously point them toward the gospel of Jesus Christ. Some people are upset that we are using money to build the Ark—but think about it: The Smithsonian Institution used $15 million in donations from David. H. Koch to build the Hall of Human Origins—just one small part of the massive museum. Another hall in the Smithsonian funded by Koch cost $35 million! Fifty million dollars is being used to indoctrinate millions of people into believing the lie of evolution and millions of years. Really, this is millions of dollars being used to indoctrinate the public in the religion of atheism. Answers in Genesis has budgeted just $10 million dollars for exhibits for the entire Ark! That’s less than the Smithsonian spent on just the Hall of Human Origins, and we’re filling an entire Ark with high-quality exhibits like what you see at the world-class Creation Museum. And the Ark will have an eternal impact by pointing people to the only Savior, the Lord Jesus Christ.

Answers in Genesis Contends for the Faith

Isn’t it interesting: The ministry of Answers in Genesis has distributed millions of books, DVDs and other resources; the Answers in Genesis website is reaching over 20 million people a month; 2.4 million visitors have come to the Creation Museum; the coming Ark Encounter is estimated to attract over 2 million visitors a year; and at this time we are seeing evolutionists and activist atheists become more aggressive than ever in trying to take people away from the truth of God’s Word and the gospel. The devil is sure active. Makes me more enthused than ever to “contend for the faith” and proclaim the gospel.

You can stay up-to-date on the exciting progress at the Ark Encounter here.