Normally I wouldn’t respond to the latest ridiculous tirade from intolerant secularists who continually oppose Answers in Genesis, the Creation Museum, and the future Ark Encounter. I thought I would respond to the latest tantrum, however, because it illustrates their utter intolerance of Christians. It is actually another illustration of the motivation behind the opposition to the Ark project, the Creation Museum, and AiG in general.

The Creation Museum attracts around 300,000 visitors a year (more than 800 people a day). In fact, this past week has been setting records—today we must have had more than 1,700 guests. Inside the museum we sell lots of food and drinks in our café. Well, right now the Creation Museum sells Pepsi products in a business relationship—just like any attraction that sells drinks. And just as we advertise the Creation Museum on TV stations, billboards, radio, and in secular and Christian newspapers, we have an advertisement for the Creation Museum on the back of some of the local Pepsi trucks—it’s like a moving billboard.

Well, some atheists have found out about this museum ad on Pepsi trucks and have been harassing Pepsi to stop its business relationship with the Creation Museum. Many of these intolerant secularists have even been promoting a boycott of Pepsi!

Now, I won’t link to the site I will be quoting from below, as the pictures on the site are not suitable for public viewing. (The website actually reveals what kind of people we are dealing with.) Here is what one of the secularist websites states about Pepsi and the museum:

Pepsi’s Creation Museum ad is resulting in backlash from consumers.

Hmm. If you read the website and the comments from people posting about a possible boycott, you would come away with the impression that they seem to think they own the world. It’s a small group of atheists that is involved and these secularists act as if they are the major Pepsi consumers!

The ad, seen on the back of a Pepsi delivery truck and shared on Reddit, has quickly gone viral, and consumers are calling for Pepsi to end any connection with the museum, where exhibits claim to show that evolution never happened and humans lived side-by-side with dinosaurs.

So a small group of intolerant atheists is calling for a business not to allow an advertisement for another organization because it’s a Christian one! Isn’t that discrimination? How could that be? Many atheists claim they are tolerant people and never discriminate!

It began Thursday morning, when redditor rustyfencer shared the photo on /r/atheism.

And the website showed this photo from the back of a Pepsi truck. Actually, I think it’s a great advertisement. 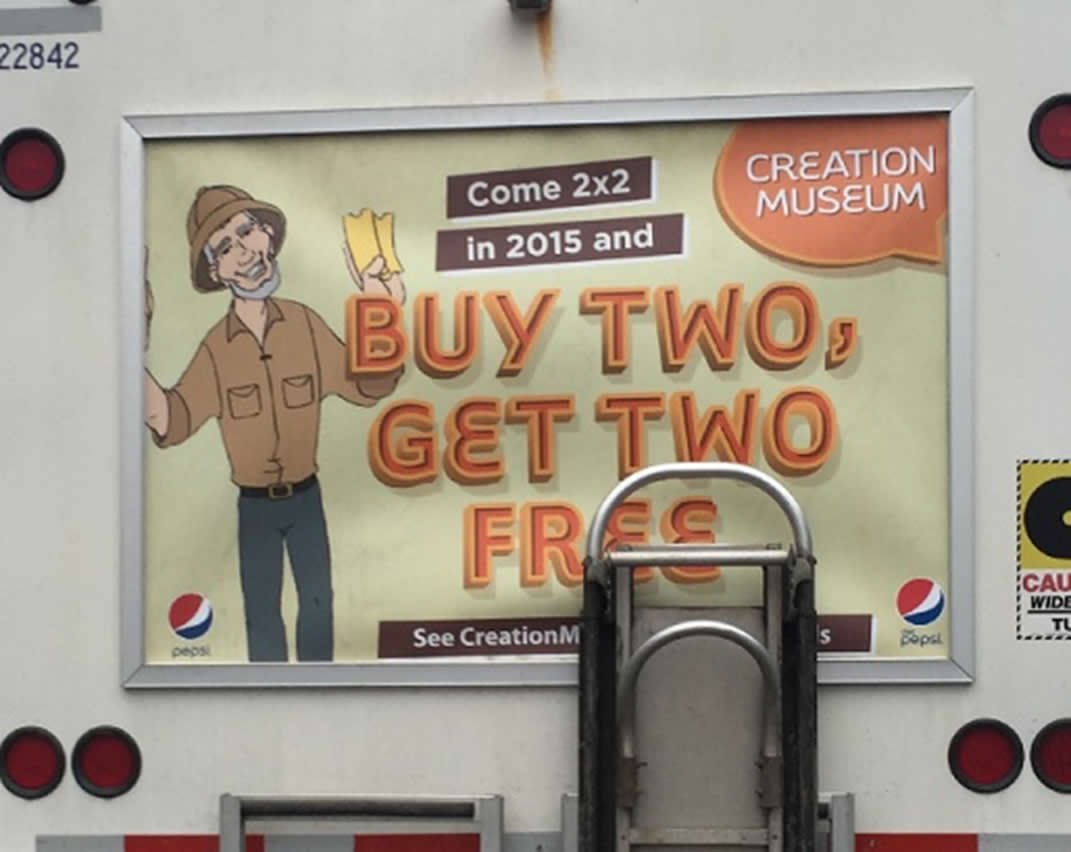 Well, at least the secularists showed this nice photo of our “billboard” on the Pepsi truck.

The intolerant and discriminating atheist continues:

Many redditors demurred, pointing out Pepsi’s positive efforts in diversity and acceptance, as well as connections to more legitimate scientific endeavors. Others joined in, sharing letters they had written to Pepsi’s Corporate address, calling for a distancing of the company from the Creation Museum. The concern about the Creation Museum relationship grew, though, spreading out from reddit.

Wow! The Pepsi truck concern spread to what—another two or three intolerant atheists who also want to discriminate against Christians? Again, I won’t link to this, but let me quote from one of the sites where the atheists were discussing their attempted boycott:

I’m sure Pepsi would not support such blasphemous trash. But you need to understand that such behavior is the norm for secularists who attack AiG, the Creation Museum, and the Ark Encounter. They are so lost spiritually. They need the Lord.

In regard to their attempts at a supposed boycott, I actually have to chuckle. After all, these intolerant secularists are such a minority in the culture. Christians outnumber them many times over. The secularists really think that because we have a facility like the Creation Museum with a Christian message, we have no right to have business dealings with companies who sell us products we then resell at the museum. And they often cry for tolerance and for no discrimination in the culture. Yes, they are so hypocritical. Yet they stir up their few atheist friends to write negative comments on Pepsi’s Facebook, write letters and emails to Pepsi, and so on. But, as I said above, it clearly illustrates how intolerant they are of anything Christian in the culture.

People need to be aware of a growing social media technique. The objective is to flood a boycott target by the mass creation of Twitter accounts and other bot-created outrage. (“Bot” is short for “robot.”) Radio commentator Rush Limbaugh recently revealed the boycott of his advertisers was almost 70% from only 10 individuals. This kind of social media activism has rapidly become the new cyber-attack method used by activists.

In their writings about our business relationship with Pepsi, these atheists also mention the state of Kentucky’s refusal to allow AiG to participate in the tourism incentive program for the Ark project, which is why we currently have a lawsuit against the state of Kentucky over this obvious viewpoint discrimination.

But as usual they disseminate misleading and false information about this legal issue.

In recent times these secularists times have also been trying to convince people that the Creation Museum is failing, which is a load of nonsense! Come to the Creation Museum yourself and see the crowds that pour in every day—and, as I said, this week we have been breaking attendance records again. They have been trying to convince the public that no one will come to the Ark project. But the very latest research estimates a minimum of 1.4 million people (up to 2.2 million) in the first year at the Ark Encounter. Years ago, secularists tried to stop the building of the Creation Museum. They failed and, because of what they tried to accomplish, they actually (unwittingly, of course) gave us great publicity—and helped us get a much better piece of property and build a bigger museum! With the Ark project, they also thought that if the tourism incentive in Kentucky was not allowed for the Ark Encounter, then it was doomed. So when the efforts of certain secularists helped influence state officials to deny AiG’s participation in the sales tax rebate program (which the state had given preliminary approval for), they thought the project was doomed! In reality, and as we’ve said all along, that incentive (a percentage rebate on sales tax paid within the park) only starts kicking in a year after the facility is opened and running! No money comes from state funds to build the Ark.

Yes, they are false prophets.

I’ve noticed recently, especially since I’ve been posting updates with photographs on the life-size Ark construction, that the atheists are no longer claiming it won’t be built. I think they must be angry that their efforts to oppose AiG, the Creation Museum, and the Ark project have only helped us with publicity and that they are now trying another angle—including blasting Pepsi for allowing our ad on their “moving billboard.”

One of the atheist sites even posted a link to a picture of the time when we had a business relationship with the Coca-Cola Company and attacked Coke. That photo dates back to 2009. This person didn’t even realize until after this link was posted that this photo was years old and that now we sell Pepsi products! So, now they are upset to find we also have had a business relationship with the Coca-Cola Company! I wonder if they will call for a boycott of that company because we used to sell their products. Whatever these intolerant people think they can use against us, they will try—regardless of the truth. And regardless of how intolerant and discriminatory they are being. They must be so angry at God to act like this.

Well, ultimately I think this is good advertising for Pepsi. And the atheists’ reaction certainly shows how desperate these secularists are to attack us. Actually, I’m thrilled we receive such opposition, bizarre as it is. If we were not doing anything that would upset the enemies of God, they wouldn’t respond. And once again it shows clearly that such issues are part of a spiritual battle:

For we do not wrestle against flesh and blood, but against principalities, against powers, against the rulers of the darkness of this age, against spiritual hosts of wickedness in the heavenly places. (Ephesians 6:12)

One of the atheist sites actually declared the following:

Yes, they recognize we have a right to buy and sell products just like anyone else. But on the same site, they say we shouldn’t be allowed to have such a partnership.

So why, then, would these atheists claim that Pepsi should not do business with the Creation Museum?

Well, here are the reasons that they have posted to the site as to why Pepsi shouldn’t have such a business relationship with the Creation Museum:

. . . consumers [a few intolerant atheists] are calling for Pepsi to end any connection with the museum, where exhibits claim to show that evolution never happened and humans lived side-by-side with dinosaurs.

Now, that’s called viewpoint discrimination. The atheists do not want freedom of religion and the free exercise of religion in this country. They want freedom from anything Christian and free exercise of atheism to the absolute exclusion of anything Christian. And these are the same sort of people who have been negatively pressuring the state of Kentucky concerning the Ark Encounter project and the sales tax rebate.

Now wait until the Ark is opened, and we’ll be selling many times more Pepsi products than we are now.

While Answers in Genesis is supporting businesses, bringing millions of dollars into the economy of Kentucky, and providing large numbers of jobs (and all this will increase exponentially when the Ark is opened next year), these secularists throw a tantrum and want to stop us because they will not tolerate those of us who have Christian beliefs.

Enjoy a Pepsi product the next time you are at the Creation Museum.

To find out more about the “2 buy 2” museum program that is advertised on the Pepsi “moving billboard,” then go to this link. This program will bring more people to the Creation Museum this year, which is what the atheists of course do not want. Just like when many didn’t want Bill Nye “The Science Guy” debating me last year because they didn’t want people to hear creationist arguments, they don’t want people coming to the Creation Museum and hearing information that they want censored from the public. (And in many ways they have succeeded in having creation censored from the public education system.)

For more information on the “2 Buy 2” promotion you can visit the Creation Museum website or watch this short video below.

Previous Article STEM the Tide against the Evolutionary Indoctrination of Teens! Next Article Another Award for AiG